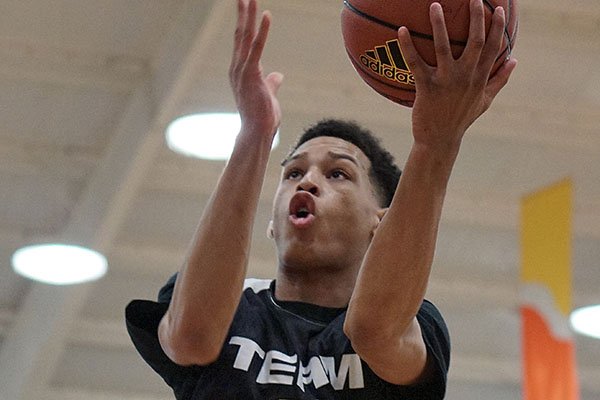 Khalil Garland of Team Penny goes for a layup during their game Saturday during the Real Deal in the Rock at P.A.R.K. in Little Rock on Saturday, April 2, 2016.

Khalil Garland’s commitment to Arkansas on Saturday afternoon made the Razorbacks a perfect 3 for 3 in securing pledges from the state’s top class of 2017 trio.

It also provides a substantially clearer glimpse of what the Razorbacks’ roster could look like when the 2017-18 season rolls around. With the commit, 12 of the 13 available scholarships for the year are allocated. Obviously there’s no guarantee the roster pans out as it appears at the moment. Garland, Daniel Gafford and Darious Hall still have to sign in November, there’s still room to add at least one more class of 2017 signee and few college programs, Arkansas included, go an offseason without defections these days.

But the nexus of the roster has seemingly been established. What follows is conjecture, to be sure. It’s summer. There’s not a whole lot going on until Bret Bielema’s Hogs kick off fall camp in a few weeks.

Three things jump out about this roster.

Mike Anderson has already made it clear he expects the Razorbacks to be in the NCAA Tournament in March of 2017. Assuming that happens, Arkansas would go into the 2017-18 campaign with a roster led by six seniors presumably brimming with confidence stemming from an NCAA Tournament appearance.

Jaylen Barford, Daryl Macon and Arlando Cook would be entering their second season with the program, no longer transitioning from junior college ball. Anton Beard and Trey Thompson would be battle-tested heading into their fourth years in Fayetteville. Penny Hardaway lauded Garland's potential as a point guard while coaching Garland's AAU team. Toss him into the mix with Barford, Macon and Beard, suddenly Arkansas has four primary ballhandlers in the rotation (maybe five or six, depending on the development of C.J. Jones and RJ Glasper). To put it in perspective, compare that to last season when the Razorbacks only had two players capable of consistently setting the table offensively. With this personnel in 2017-18, the offense wouldn’t be hamstrung by having to get the ball to a certain player to run the show and generate looks.

With this roster, Arkansas would have a bevy of ballhandling upperclassmen and almost assuredly be one of the most experience-rich teams in the nation.

2. Length on the wing

Consider that last season’s Razorbacks were Anderson’s worst defensive team since his first season in Fayetteville. The Hogs posted a 100.5 adjusted efficiency according to kenpom.com, a figure which ranked 101st in the nation and near the bottom of the SEC. Some of the issues were caused by the lack of another consistent big to pair next to Moses Kingsley. A lot of it had to do with the Razorbacks’ inability to guard on the perimeter — they allowed opponents to hit 35.9 percent of 3-pointers, the worst mark in the SEC and among the worst in the nation.

The Razorbacks struggled to guard the arc in part because the collection of perimeter talent was lacking in defensive acumen, but also in part because the roster didn’t have the requisite length to make looks difficult for opposing shooters. At 6-foot-4 with a gargantuan 6-9 wingspan, Jimmy Whitt was the closest the Razorbacks had to a sizeable wing, but his broken shot and overall offensive ineffectiveness resulted in a lesser role than anyone expected. To be clear, college basketball (and basketball as a whole) is trending smaller and three-guard lineups are certainly more than tenable. But playing small is made a lot easier when some of those guards have length and athleticism.

That wouldn’t be an issue on this roster. The Razorbacks would have at least three big guard/wing types in Garland, Darious Hall and CJ Jones, potentially as many as five depending on how current freshmen Adrio Bailey and Brachen Hazen’s games translate. Garland and Jones are combo guards who coaches hope will be able to initiate the offense. Hall and Bailey are bouncy and active. The group boasts versatility and athleticism, hallmarks of Anderson’s good teams.

Perusing the roster, Arkansas appears to be set in the backcourt as far as the 2017 class goes. A case could be made for targeting another shooter, but, barring mass attrition, the Razorbacks will be flush with guards in 2017-18, especially when factoring in Glasper, who it sounds like could wind up turning into a steal.

The 2017-18 roster might have as few as four frontcourt players, but it’s probably safe to bet Bailey and Hazen project as combo forwards in Anderson's system. Gafford would ostensibly step into a Kingsley-like role, but he’s still growing into his frame and it’s not fair to expect him to completely fill the production vacuum Kingsley’s graduation will leave behind. Thomas and Thompson would also be seniors, which makes it logical that Anderson and his staff could target another big with the (as-of-now) final 2017 scholarship.

The staff was still evaluating players at all positions in the 2017 class last week, but Anderson and T.J. Cleveland did make a stop to watch Garrison Brooks (6-9, 215), who recently picked up an Arkansas offer and has a connection with Anderson. The deluge of in-state talent will continue in 2018 and features several bigs the Razorbacks are pursuing. The notable frontcourt names are 7-3 Connor Vannover, along with Kalin Bennett and Ethan Henderson, two 6-9ish Little Rock forwards that fit Anderson’s scheme.

That upcoming talent could be what keeps the staff from signing another big in the 2017 class, but it will be worth watching whether the Razorbacks make Brooks a higher priority moving forward or if new big man names emerge.

It also wouldn’t be surprising if Arkansas pursued a transfer or JUCO in the spring, given the program’s penchant for both under Anderson. At that time, he’ll have a better understanding of what he has on his roster, what may be leaving and what is coming in. Regardless, it’s hard to imagine he wouldn’t be happy to roll with the above roster in 2017-18.