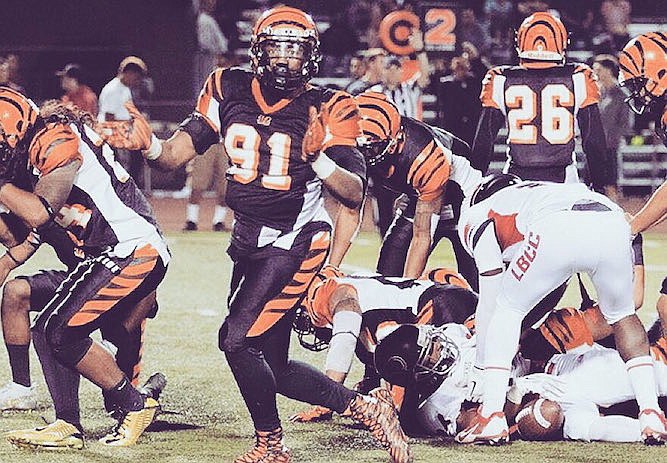 FAYETTEVILLE — Riverside, Calif., Community College defensive end Michael Taylor (6-3, 248, 4.6) will begin his official visit to Arkansas on Tuesday with a mind toward being a Razorback sooner than later.

Taylor, an Orlando native, had 50 tackles with four sacks and 11.5 tackles for lost yardage last season for Riverside and is friends with current Razorback wide receiver Dominique Reed.

He initially attended North Carolina Central on a track scholarship and ran the 110 hurdles as a freshman, but transferred to Coffeyville, Kan., Community College where he met Reed.

He left Coffeyville after a semester and landed at Riverside where he had a great season in 2015 for head coach Tom Craft.

“Michael is from Orlando originally and is a great young man that is very versatile and can play both the three technique and defensive end for us at this level,” Craft said Monday. “He is a great edge rusher and is someone that is just going to continue to get better as he gets more experience.”

Taylor has plans to be a 2016 signee with Arkansas and play this fall – with three years to play three - if some classes from North Carolina Central transfer.

If those courses do not transfer, then Taylor – who played his high school football at The First Academy in Orlando, will be a 2017 recruit.

He has offers from Colorado, Utah State, Massachusetts, New Mexico as well as interest from Arkansas, UCLA, USC and others.

“I understand that the coaches at Arkansas would like to add him for this next year, but selfishly I would like for him to play for me this season and I think that would also benefit him,” Craft said.

“If he were to go to Arkansas in August, he would be playing catch up, but if he stayed here he could develop and then he could then go in January and be able to go through spring practice and a summer conditioning program.

“But I know that he is going to do what he wants to do so we will just see what happens.”