Hogs' Reed always had the talent 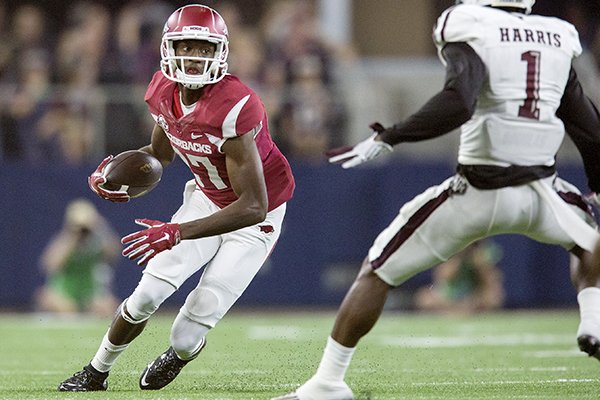 Arkansas senior receiver Dominique Reed only had a scholarship offer from Arkansas State coming out of Camden Fairview.

“He didn’t have a lot of offers because of his academic deal,” said then Cardinals Coach Buck James, who was hired as Bryant's coach last December. “Now they all liked him.”

There were plenty of things to like about the freakishly athletic Reed in high school. He triple-jumped 49 feet while competing in track and field.

“I saw him high-jump 7 feet one time in a meet,” James said. “The thing about is he didn’t practice it a lot. He was always doing football and basketball, and when he got a chance to do track he just blew the numbers up.”

He eventually landed at Coffeyville Community College in Kansas and earned first-team All-Jayhawk Conference honors as a sophomore and was an honorable mention National Junior College All-American after recording 61 catches for 1,157 yards and 18 touchdowns.

ESPN ranked him the No. 25 overall prospect and No. 6 junior college receiver in the nation. He chose Arkansas over offers from Auburn, Florida, Oklahoma, Texas, Arizona State and others.

“He persevered,” James said. “How he got there is a long story. It’s long story, but the fact is he got there. That says a lot about Dominique.”

Because of his long stride, some have compared Reed with former Hog quarterback Matt Jones.

“There was no doubt the guy could take one stride and go 5 yards after he’s running,” James said.

Bigger the game, the bigger Reed played in high school.

“The thing I remember about Dominique is he’s a big game player,” James said. “Every big game Dominique showed up and played his best game. Big game or big crowd, it seems like Dominique always came through.

“A lot of times guys have big talent and sort of disappear in big games.”

James said Reed has a lot of God-given ability.

“God spent a little bit of time on Dominique; there’s no doubt about it,” he said.

Reed is a student of the game, James said.

“He was a guy that liked to watch film for us,” he said. “He liked to study it. He picked up the play book easily.”