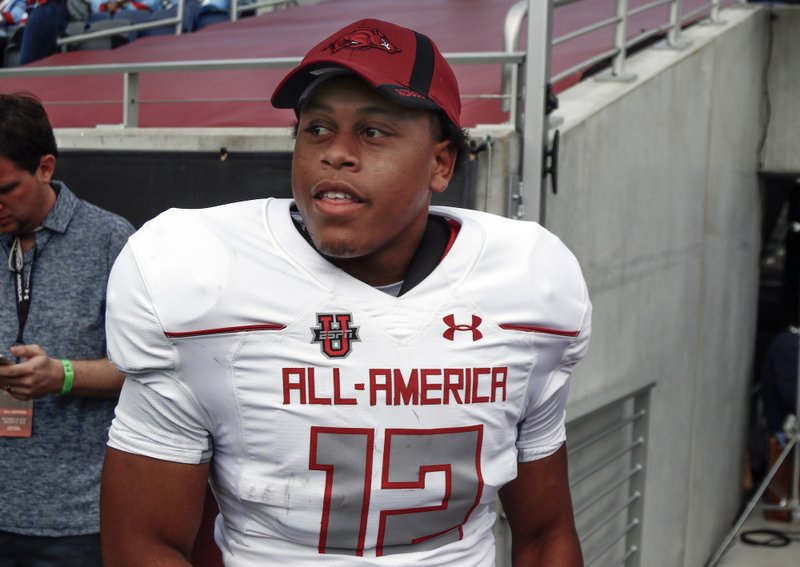 Arkansas freshman running back Devwah Whaley had a challenging recruiting process. He appeared set to play his college football at Georgia, then everything changed.

Read all profiles on this year's incoming Razorbacks

He made an official visit to Athens, Ga., early last season and officially visited Arkansas for the Mississippi State game Nov. 20. He named the Hogs his leader after the trip to Fayetteville, but he committed to Georgia a few days later on Nov. 26. Three days later, Georgia fired coach Mark Richt.

Whaley reopened his recruitment Dec. 7 and was bombarded by negative comments from Georgia fans on Twitter.

"It was a pretty difficult situation altogether," Whaley said. "Not just recruiting wise and football, but also my personal life. It was stressful, and it got overwhelming, but all I did was pray about it, and God worked it out. It all worked out pretty good."

Six days later, he made a private commitment to Coach Bret Bielema during a Dec. 13 in-home visit and made his pledge public at the Under Armour All-America game in Orlando, Fla., on Jan. 2.

Despite the drama, Whaley says he's at the right place.

"For one, I'm not second guessing myself with anything even when coach Jennings and coach Singleton left," Whaley said. "Two, just being there ... everything about Fayetteville, not just football, but the fans, the people, the players, the coaches, the environment. Everything just feels like home. I just feel extremely comfortable."

Whaley, 6-0, 218 pounds, 4.45 seconds in the 40-yard dash, of Beaumont (Texas) Central, chose the Hogs over more than 20 other scholarship offers, including Texas, Texas A&M, Georgia, Alabama and others.

He said Fayetteville is a good fit.

"I'm kind of laid-back and quiet; that's my personality," Whaley said. "With me being from Beaumont, that's kind of the way it is. That's kind of how I see Fayetteville, it's not too rowdy."

Whaley is also a big fan of Bielema.

"He wants to be the best he can possibly be, and it shows in the games, but you can also see that in practice because he works hard every day," Foreman said.

During the spring of his junior year, the track team lost a shot putter to grades. Foreman persuaded Whaley to add the event to his duties before an upcoming meet.

Whaley won the triple jump, but he finished second in the long jump to a teammate, which didn't set well with Whaley.

"He was p****d because he's a competitor," Foreman said. "He walks down to the shot put and throws it like 49 feet and wins it, and he goes back and puts his clothes back on and goes and sits in the stands. That was his second or third time to ever throw the shot."

His parents attended Brigham Young University, where his father was a middle distance runner and his mother, Mary, was a sprinter. After getting a divorce, his mother raised him and his two sisters before their stepfather, Steven Haynes, came along.

He calls his mother "superwoman" and someone that raised him to be tough.

"She always gives me a lot of constructive criticism and tells me what I need to do," Whaley said. "She gave me the knowledge and the things I needed for life, and it made me stronger, too."

Whaley' mother was unable to make the official visit to Fayetteville, so Haynes and Whaley's uncle, Terry Roy, accompanied him. His stepfather has been a positive influence.

"He's kind of like been like my mom, but a little on the soft side," Whaley said.

Roy became an Arkansas fan favorite during the recruiting process with his positive thoughts on Twitter about the Razorback program and boasting about his nephew.

"I sometimes think he gets a little carried away, but he loves me and he loves the game, and now he loves Arkansas," Whaley said. "He's one of my biggest supporters, and I love him."

Arkansas' pro-style offense and Bielema's knack of producing 1,000-yard rushers and NFL-ready running backs played a major role in him being a Razorback.

After being recruited by Singleton and seeing him leave for the Colts, Whaley has gotten to know new running backs coach Reggie Mitchell.

"He's a much older guy than Coach Singleton, so he's more mature and he's more of a businessperson," Whaley said. "Any coach is, but he takes the game serious and he wants the best for you, and he's going to put you in a situation for you to be the best."