Gafford giddy over latest Razorback commit, future of the Hogs 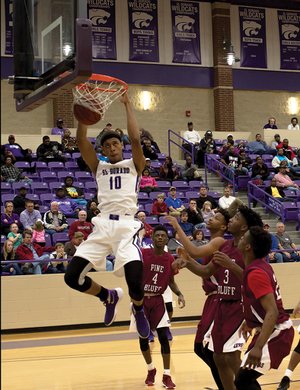 LAS VEGAS — Like most Arkansas fans, Razorback center commitment Daniel Gafford is excited about the addition of Little Rock Parkview guard Khalil Garland to the 2017 class.

Garland, who’s ranked the No. 61 overall prospect in the nation by ESPN, pledged to the Hogs on July 16. Arkansas commitment and Little Rock Mills wingman Darious Hall, 6-6, 215, is having an outstanding spring and summer with Team Magic Elite based in Memphis.

Gafford, 6-11, 223 pounds, is playing for Team Portis Wings in the Bigfoot Las Vegas Classic and had Coach Mike Anderson and associate head coach Melvin Watkins in the stands for the Wings' 74-22 rout of IBA Munich of Germany Wednesday night.

If Little Rock Parkview junior forward Ethan Henderson, who’s playing for the 16-under Arkansas Hawks, and his teammate, junior forward Reggie Perry of Thomasville, Ga., jump on Arkansas’ commitment board, Gafford believes the Hogs will be back among the nation's elite.

Gafford, who averaged 14 points, 14 rebounds and 5 blocks for the Wildcats as a junior, liked seeing the Razorback coaches in the stands.

“I get a good motivational text every day from Coach Watkins,” Gafford said. “Coach Anderson will get in touch with me every now and then.”

ESPN rates Gafford the No. 10 center and No. 52 overall prospect in the nation.

“I’ve gotten stronger and in the post I’ve gotten smarter,” Gafford said. “My footwork has gotten a little bit better. My jumper has gotten better, too. I still have stuff to work on.”

Gafford is averaging 9.3 points, 8.1 rebounds and 1.5 blocks while shooting 56 percent from the field in the Nike Elite Youth Basketball League. He’s humbled by praise he's received from the national media.