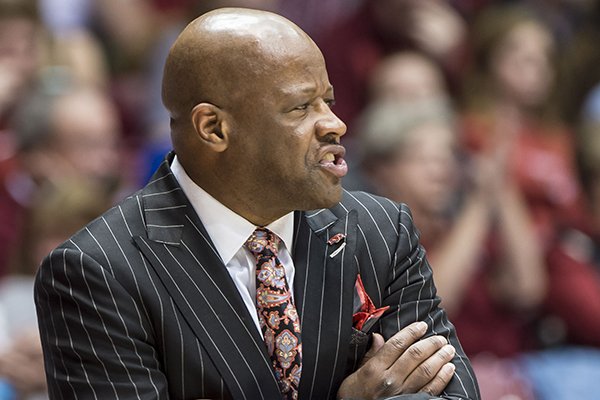 Arkansas coach Mike Anderson grimaces after a call went against the team during an NCAA college basketball game against Alabama on Wednesday, March 2, 2016, in Tuscaloosa, Ala. (Vasha Hunt/AL.com via AP)

LAS VEGAS -- Arkansas has made sure power forward Garrison Brooks, a top recruit, knows he's a priority for the Razorbacks.

Coach Mike Anderson and his staff have been fixtures at Brooks' games, and he's noticed. The Razorbacks were at his first two games while playing in the Adidas Summer Championships in Las Vegas.

"This whole month they haven't [missed a game]," Brooks said.

Brooks, who's rated the No. 23 center by ESPN, said the possibility of joining the Hogs' class is appealing, and he's looking at taking a trip to Fayetteville.

"It's a big impact because I talked to Darious Hall, and he said he's going down there in August," Brooks said. "I think I'll join him when he goes."

He believes the class could be special should he join the Razorbacks.

"I think if I joined them, it's tough not to be the number one class," Brooks said.

While Brooks is difficult to handle in the paint, Team Carroll Coach Chris Monroe said his range makes him special.

"He can shoot the 16-18 footer with ease, he can step out and hit that jumper, and I think that's what makes him so special," Monroe said. "He's not just a back-to-the-basket guy, so I wouldn't necessarily label him as a center. I would label him as a true power forward that can actually stretch the floor and hit that jump shot."

During one play of the Team Magic Elite contest, Brooks was fouled going up for a basket, but he wasn't fazed a bit as he scored and converted the free throw.

The play reminded one observer of former Arkansas All-American and NBA star Corliss Williamson. Monroe agreed with the comparison.

While some believe Brooks is Mississippi State-bound because his father, George, is an assistant coach for the Bulldogs, Arkansas has a strong connection, too.

His uncle, Mo Finley, played for Anderson at Alabama-Birmingham from 1999-2004 and hit the winning shot to defeat then-No. 1 ranked Kentucky in the second round of the 2004 NCAA Tournament.

"I've known Coach Anderson since I was a little kid going to my uncle's games," Brooks said. "I know Coach T [Cleveland] a little bit [and] I think it's a great atmosphere because all of those guys were at UAB. My family is very familiar with them. My grandmother feels very comfortable with Coach Anderson so that just makes it better for me."

Brooks said Finley thinks highly of Anderson, but is trying to stay neutral during the recruiting process.

"In September, I think I'll probably do a top seven," Brooks said. "I'll take all five of my official visits, and I'll probably make my decision on signing day in November."