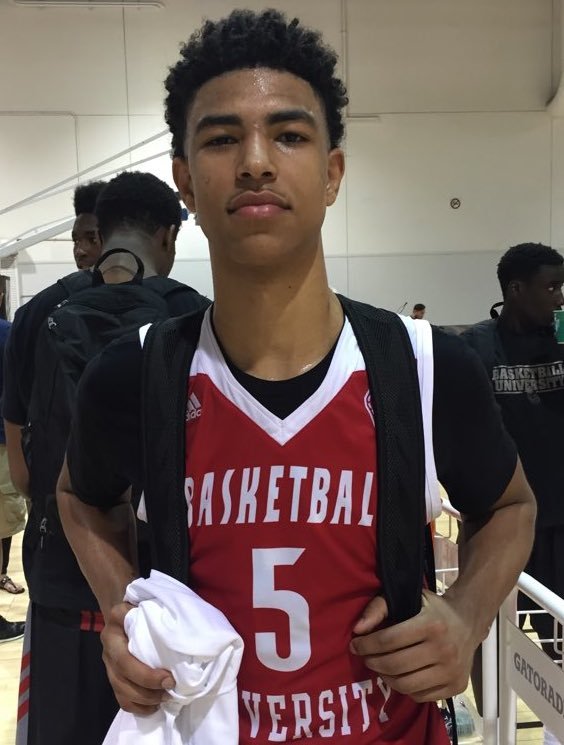 Coach Mike Anderson, associate coach Melvin Watkins and Grimes’ lead recruiter and assistant Scotty Thurman were strategically seated near one of the baskets at Cashman Center near downtown Las Vegas.

Grimes, 6-4, 195 pounds of The Woodlands, (Texas) College Park is averaging 18.3 points, 8.3 rebounds and 2.7 assists a game for Houston based Basketball University.

“They’ve been pretty much texting me about every day,” Grimes said of Arkansas. “Coach Thurman texts me just about about every game and he’s at almost every game.”

He said he has “a high level of interest” in Arkansas.

“They talk to me and my dad,” Grimes said. “So I’m really interested in what they have to offer. I plan to visit in August or September.”

ESPN rates Grimes the No. 12 point guard and No. 45 overall prospect in the nation for the 2018 class. He has about 20 scholarship offers from schools like Kansas, Arizona, Miami, Marquette, Texas A&M and Texas. The Hogs appear close to offering.

“They haven’t offered yet, but the head coach said once he sees me in a couple of games they’re going to offer,” Grimes said.

He doesn’t try to pay too much attention to the college coaches in the stands.

“You can tell when there’s a big-time school like Arkansas,” Grimes said. “You try and not pay too much attention to it and play your game.”

The NCAA has loosened up the rules on communication with recruits and unlimited texting was one of them.

“It’s crazy non-stop text messages at midnight, two in the morning,” Grimes said. “You have to be aware of that and not get overwhelmed.”

Grimes said he also plans a visit to Oklahoma along with a possible trip to Kansas in the near future.