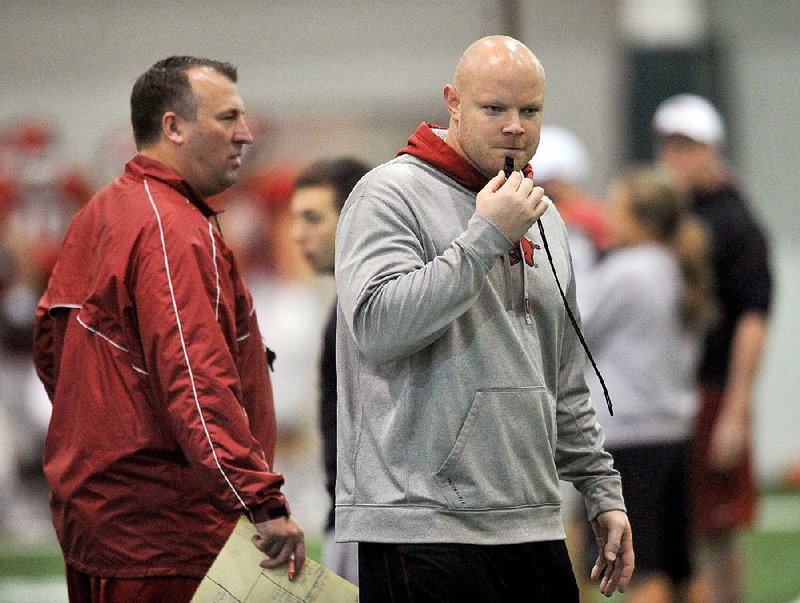 University of Arkansas Assistant Head Strength and Conditioning Coach Ben Herbert works with the Razorbacks during practice in this file photo.

Like most Hog fans, Arkansas offensive line commitment Shane Clenin enjoyed watching the recent video of the Razorback players maxing out in the squat on top of the south end zone of Reynolds Razorback Stadium.

“It was pretty intense,” Clenin said. “I really don’t know what I was expecting. I’ve never seen any school do that. Ever. I thought it was cool. I kind of thought it was kind of freaky at the same time. It was really intense. I thought it was awesome, but I was trying to picture myself doing that and I was like, ‘Wow, that’s crazy.’”

Clenin will arrive in Fayetteville later tonight for an unofficial visit on Wednesday. This week is a dead period for Missouri athletes and offensive line coach Kurt Anderson suggested it being a good time for a visit.

“He said it would be a good time to come down and go over some film and technique stuff,” Clenin said.

Hog offensive line target Dalton Wager is expected to bring his mother to Fayetteville for a Thursday visit. Clenin said he and Wagner have spoken.

“We talk every now and then,” Clenin said. “We’ve texted quite a few times. I haven’t talked to him recently just because I’m just letting him do his own thing.”

“I told him how I felt about Arkansas, and we really just talked about recruiting in general, and I asked him kind of how he’s doing and where he’s leaning. We kind of talked about college in general.”

He has a 3.93 grade point average and puts a premium on education and is looking to major in civil engineering. The two highly touted linemen have a lot in common.

“What I like about Dalton is we see eye-to-eye on a lot of that stuff and we kind of have the same opinions when we’re looking toward college,” Clenin said. “A lot of times we’ll talk about Coach Anderson and kind of the atmosphere and kind of what we both liked when we’ve been down there.”