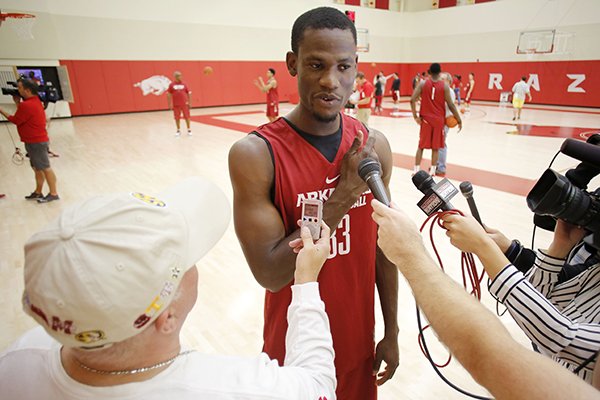 The first hour of practice was open to media, so here are some observations. As with the first few days, the disclaimer is that it is only a portion of one practice and no one should draw overreaching conclusions from an hour in late July.

— Moses Kingsley was back from LA and went through everything in the hour open to media. He looked surprisingly spry, considering he’d spent the week competing with some of the best talent in the nation and then flew back to NWA last night. Showed off his 7-3 wingspan in a transition drill. He grabbed the rebound on one end and brought the ball upcourt on a 3 on 2 break. Neither defender rushed to stop the ball, so he kept it and took off from a few feet inside the foul line, extending for an easy finger roll. It was a simple yet impressive play.

— Much of the open portion of practices this week has been devoted to shooting. Kingsley’s mid-range shot looked solid, even if he at times doesn’t much lift on his jumper. He shot just 28 percent on jumpers last year, according to Hoop-Math.com, a number that likely takes into account floaters and shots of that nature. His shooting showed promise but tailed off as the season wore on and he played big minutes. The mid-range shot figures to be an improved part of his game this year, one that he can use to up his draft stock if he hits it consistently.

— Manny Watkins was back, too, after missing Thursday’s practice because he was sick. Worth noting again that he has been extremely impressive on defense. His size, strength and want-to have been evident each day he’s been out there this week.

— Trey Thompson had another impressive day. Some of his post buckets have come against the freshmen, players he owns a size and weight advantage over. But his shot continued to look good. Will be interesting to see how much of him actively looking for his jumper and then hitting it carries over to game action against different competition when the team heads to Spain. His value as a passer can’t be undersold. He’s generated a lot of easy looks for guys this week. Not a lot of 6-9, 270-pounders can put the ball on the floor and make a feed like this.

— Thompson has shown some improved bounce this week, even with wanting to lose another five to 10 pounds. He’s dunked routinely in drills where most of the bigs just lay the ball up to conserve energy. He also had this nice block on Dustin Thomas today.

He improved a bit as a shot blocker from his freshman to sophomore year, going from 1.2 blocks per 40 minutes, to an even 2. He’s clearly been one of the team’s three best bigs this week. I’d want to fully explore Kingsley-Thompson lineups in the nonconference portion of the schedule.

— Thomas tried to poster someone during one drill and didn’t quite get it to go. He also hit 11-12 consecutive mid-range jumpers in a shooting drill. And he didn’t rattle any home — they were all swishes.

— Kingsley, Thomas and Thompson should each get a lot of the frontcourt minutes, so that leaves Arlando Cook, Adrio Bailey and Brachen Hazen competing to be the fourth big. Cook is probably the fourth guy at this point. He’s got good size and is an effort guy, which is all he’s asked to do.

That play sort of sums up how he’s looked this week. Up-and-down on the offensive end, but has competed and given a lot of effort.

— Bailey has a chance to earn playing time with his athletic ability and tenaciousness. He's shown some defensive instincts this week and his elite leaping ability could be a weapon on the offensive glass.


In the first clip, he gets around Kingsley to knock away an entry pass. Watkins recovers the loose ball and whips a pass to Kingsley, who momentarily has an open layup with Bailey out of position. But Bailey recovers for the block, which triggers a fast break. In the second, he and Watkins combine to thwart a 3 on 2 and instead convert a 2 on 1 heading the other way. Impressive activity by the freshman.

— Hazen’s defense and strength will need to improve for him to get big minutes as a freshman. His skillset as a shooter with good hops is something to build on. He’s provided a few highlight alley-oop finishes this week.

— A portion of the practice focused on bigs slipping the pick-and-roll and finishing quick feeds. With Thomas and Bailey, several of the additions have the ability to make plays off those dishes, something only Kingsley could consistently do last year.

— If the starting backcourt is Daryl Macon, Dusty Hannahs and Jaylen Barford, it appears Macon would be the best bet to guard quick opposing point guards. His ability to move laterally and slide his feet can help cut off penetration at the point of attack. Whether that’s the starting backcourt remains to be seen, but it seems like the most natural choice, unless Arkansas is facing a team with a big scoring wing, in which case Watkins could fit. I suppose the argument could be made that one of those players would be better served coming off the bench to provide a scoring punch, but the rotation can be staggered so that two of them are on the court at most times. Hannahs is the team’s most natural scorer and Macon appears to be the best distributor in the backcourt, so it would seemingly come down to Barford or Watkins. I’d go with the additional primary ballhandler in Barford, who has the physicality to match some of what Watkins brings to the table. This is as much a discussion of who should close as who should start.

— Macon made me appear halfway intelligent today. Had a donor come sit next to me and ask me to take him through the newcomers. When I pointed out Macon, I told him I thought he and Hannahs were easily the two best shooters on the team. He proceeded to hit a string of 3-pointers in a row. Nice timing.

— Anton Beard has a wrap on his right (off) hand that could have affected him a bit this week. Has been a bit inconsistent shooting the ball at times, but has looked very in control and is no doubt benefiting tremendously from this trip as he works to regain the form he found the second half of his freshman season. He’s another solid defender in the backcourt who should be even better in year three.

— RJ Glasper’s release point on his shot is low at times, which, combined with his height, could make it tougher on him getting his shot off. His quickness and handle do help in that regard. He’s shown a knack for scoring, too. But something to watch.

— Rashad Madden was at practice today and has grown his hair out.

— There may or may not be a practice open to the public next week. Nothing concrete yet, but they’ll announce it if they do decide to open it up. They may open Tuesday’s practice to media. If they do, I’ll be there. With Bret Bielema and his assistants speaking in Bella Vista today, I was the only media member at basketball practice. Was great of Anderson to open it up this week with all the newcomers and moving parts. Helped get a feel for the team and has given me and the rest of our staff a lot to write about, not only this week but moving forward as the Spain trip gets closer.