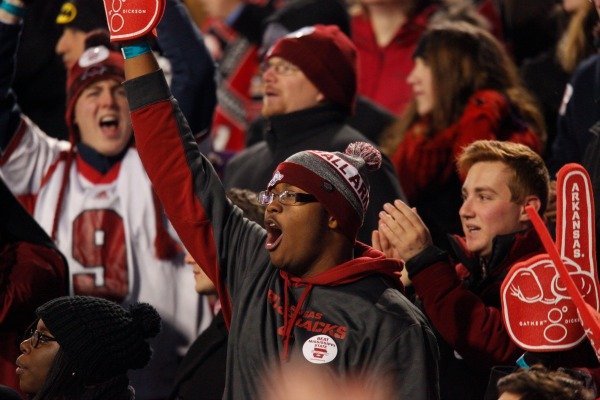 Arkansas fans cheer during the Razorbacks' game against Mississippi State on Saturday, Nov. 21, 2015, at Razorback Stadium in Fayetteville.

FAYETTEVILLE — Arkansas is promoting its 2016 home football schedule as its best ever and fans are responding.

Despite an increase in most ticket prices, the Razorbacks have already eclipsed their season ticket sales from last season. Arkansas has sold 50,102 season tickets to 9,588 accounts as of Tuesday.

Arkansas to start season vs. Louisiana Tech with afternoon kickoff

Single tickets for the Oct. 8 game against Alabama and Nov. 12 game against LSU are sold out after Razorback Foundation donors were given priority purchase access Monday, said Chris Freet, a senior associate athletics director at Arkansas.

The only way to purchase tickets to those games are to buy a season ticket package or through the secondary market. Freet said less than 1,400 season tickets are unsold.

Less than 600 tickets remain for the Oct. 15 game against Ole Miss and less than 400 for the Nov. 5 game against Florida, Freet said. Any single-game tickets not purchased by Razorback Foundation members will go on sale to the public Thursday.

In addition to the four SEC games, Arkansas has home games against Louisiana Tech on Sept. 3 and Texas State on Sept. 17. The Razorbacks are also scheduled to play Alcorn State in Little Rock on Oct. 1.