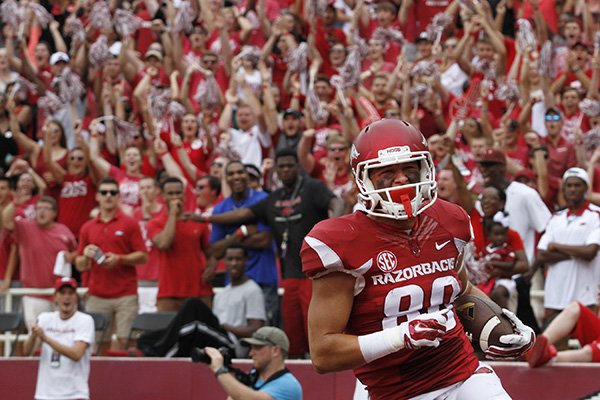 In this Sept. 5, 2015, photo, Arkansas fans cheer as Drew Morgan scores a touchdown for the Razorbacks during the NCAA college football game against UTEP at Donald W. Reynolds Razorback Stadium in Fayetteville, Ark. The Razorbacks beat the Miners, 48-13. (AP Photo/Samantha Baker)

FAYETTEVILLE — Prices for lower-level seats to Arkansas' conference football games have increased by as much as $30 per seat over similar games last season.

The Razorbacks are selling lower-level tickets for $85 apiece to home games against Florida and Ole Miss. Single-game tickets have already sold out at the same price point for games against Alabama and LSU.

Upper-level tickets are being sold for $55 apiece to the Florida and Ole Miss games, and were sold at $65 apiece for the Alabama and LSU games.

The Razorbacks increased ticket prices for most seats earlier this year in an effort to help pay for a pending $160 million renovation to Donald W. Reynolds Razorback Stadium. Despite the price hike, season ticket sales have increased since last season.