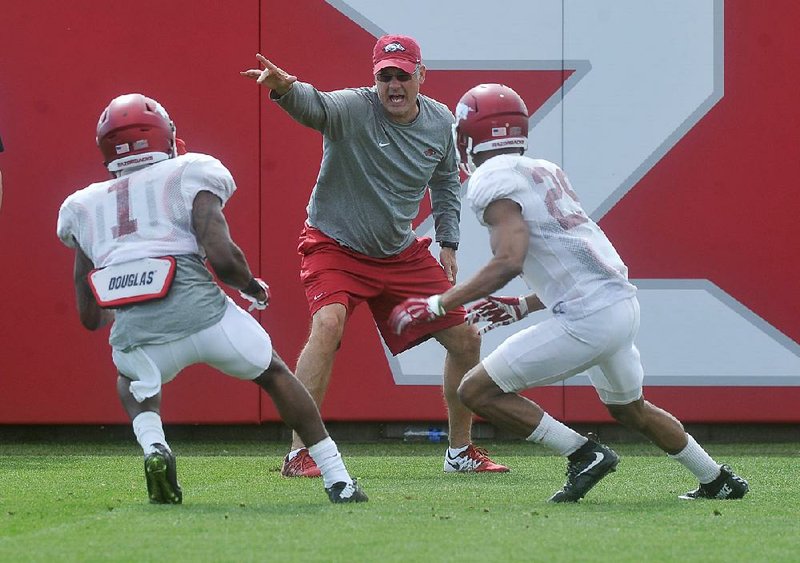 FAYETTEVILLE — The team with the worst pass defense in the SEC last year didn’t have any cornerbacks in its 2016 class when National Signing Day rolled around in February.

Arkansas went after a few big-name corners, but struck out and wound up not signing any.

The misses made cornerback arguably the Razorbacks’ biggest position of need moving forward, with two of the their top corners — Jared Collins and D.J. Dean — set to be seniors this fall. Since early February, it’s apparent Arkansas has made adding depth at the position a focal point.

In March, the Razorbacks signed junior college transfer Britto Tutt (6-2, 184), who will have three years of eligibility. Arkansas beat out Oregon State and Hawaii for his services. Whether he winds up on the depth chart this year or down the road, the staff identified him as a worthy player to take well past signing day.

Beyond Tutt, cornerback is clearly one of the main priorities in the 2017 class. Arkansas has secured three verbal commitments from potential cornerbacks in the past two weeks.

The Razorbacks picked up a commitment from Jarques McClellion, a 6-1, 180-pound corner from Florida, on Monday (highlights below). He joins Jenks, Okla., commit Jordon Curtis (6-2, 185) as the two for-sure cornerback prospects among Arkansas’ 16 verbal commitments in the class. McClellion is an accomplished track athlete with sprinter speed, while Curtis is an electric two-way standout for Jenks, Oklahoma’s premier powerhouse. Korey Hernandez, a 6-0, 175-pounder from Georgia, committed last Friday and could play cornerback in college after primarily playing safety as a junior.

Assuming all three wind up signing with Arkansas in February, they’ll have an opportunity to earn early playing time. Aside from Dean and Collins, juniors Henre Toliver and Kevin Richardson (who can also play safety) are the only corners on the current roster with substantial experience (sophomore Ryan Pulley flashed potential late last year, including an interception in the Liberty Bowl).

Obviously it would be foolish to attribute all the pass defense issues last season to the play of the corners. They had their work cut out for them at times as other parts of the defense hung them out to dry. Arkansas got largely inconsistent play from its safeties much of last year and Deatrich Wise was the lone consistent pass rusher on a defense that ranked 12th in the SEC in sacks. Still, there are questions at corner and it isn't a position with great depth moving beyond this season, which is why it was key for the staff to address it in this class.

None of the recent commits are highly rated prospects. McClellion is ranked a three star by ESPN, the No. 47 cornerback in the class. The other two haven’t been rated by the service yet, but are three stars on other sites. Fun fact: Bret Bielema has never signed a cornerback rated four stars or higher in 11 recruiting classes as a head coach. But that shouldn’t come as a surprise. He built Wisconsin up with primarily mid-tier recruits and has downplayed the importance of recruiting rankings while simultaneously developing talent that hasn’t always been rated highly since arriving in Fayetteville in 2013.

He and his staff trust their own evaluations, which, in several cases, has led to larger programs swooping in late to try to steal Arkansas commits who weren’t initially rated highly. That’s not to say that will or won’t be the case with McClellion, Curtis and Hernandez, but Bielema and Co. identified the trio and extended committable offers that they then accepted early in the process at a position of great need.

That should be encouraging, given the staff’s track record.