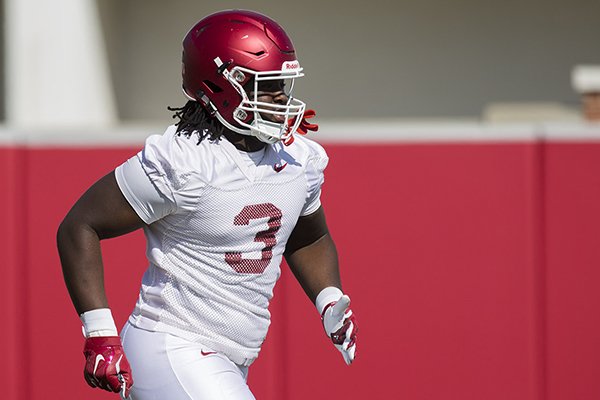 The first in a series profiling the newcomers on the 2016 Arkansas Razorbacks football team.

FAYETTEVILLE -- McTelvin Agim grew up poor in Texarkana, Texas, and ended up bouncing from school to school before he found Hope.

During his rugged childhood years -- which included a stint living at The Salvation Army -- the son of a single mother who was raised mostly by a beloved grandmother said he was once told by a middle school principal that he would either be in jail or dead by the age of 18.

Noteworthy Named Arkansas Democrat-Gazette’s 2015 All-Arkansas Preps defensive player of the year and a three-time all-state selection. … Gatorade Arkansas football player of the year in 2015. … Participated in The Opening in Beaverton, Ore., and the Under Armour All-America game. … 2015 All-USA Arkansas defensive player of the year. … Ranked No. 1 prospect in Arkansas by ESPN, 247Sports and Rivals. … Ranked No. 11 player in the country by ESPN, No. 18 by 247Sports, No. 44 by Scout.com, No. 50 by Rivals. … Early enrollee who participated in spring drills for the Razorbacks after graduating ninth in his class with a 3.8 grade-point average. … Racked up 221 tackles and 55 sacks in three seasons at Hope. … Named Sports Illustrated’s high school athlete of the month in November. … Two-time state champion shot putter. … Chose Arkansas over finalists Baylor, Ole Miss and Texas A&M, and also had offers from Alabama, Auburn, Clemson, LSU, Mississippi State, Missouri, Notre Dame, Stanford and many others.

"I wasn't a bad child; I just had little guidance," Agim said. "So it was like they categorized me as something that I wasn't. It was like they thought I was so deviant I was probably a threat to everybody else in the school, and it wasn't that at all."

An early graduate with a 3.8 grade-point average from Hope High School, Agim will carry about 28 college credit hours into his freshman season with the intention of graduating in three years. He also was a consensus top 100 national football prospect courted by major powers across the country and the defensive gem of the Razorbacks' Class of 2016.

Agim, a 6-3, 285-pound defensive end, decided he wasn't going to be a problem child; he was going to be a great football player. But he could see from where the principal's proclamation came.

"It was like ... he had given up on me," he said. "This was middle school. I had created a name for myself since elementary, well, really since Pre-K. I got kicked out of Pre-K and everything.

"It was just bad. It was one of the reasons I had to move, because it was like there was no way when I got to high school that anything was going to change."

Agim's mother, Deanna Giddens, who worked two jobs and studied to earn a nursing certificate, relocated her family to rural southwest Arkansas after her mother, Charlie B. McGraw, passed away in 2011. Agim had bonded with Charlie B., and he was adrift after her passing.

A move to Emmet, which was going to put Agim at Blevins High School, came against his wishes.

Giddens got a job in Hope, and that's where Hope Coach Jay Turley entered the picture. Turley promised Agim, then about 6-2, 220 pounds, he would help get his name out on the college recruiting scene.

"His focus on where he needed to be and how to get there was way more mature than most kids his age," Turley said. "He had a goal for himself that he set at a very young age."

The goal: To be great.

"Like my aunt and my grandmother, they just instilled in me, whatever you do, be the best at it," Agim said. "I was never satisfied. I'm still not satisfied.

Turley got Agim an invitation to an Arkansas camp the summer before his sophomore year.

"Once I started watching him work out and saw how naturally strong he was and some of the gifts he has, I knew he'd have a chance to fulfill those dreams," Turley said.

Coach Bret Bielema and the Arkansas coaching staff were intrigued by Agim from the beginning.

"I've been knowing him since he was in the ninth grade," said Arkansas tight ends coach Barry Lunney Jr., the Hogs' chief in-state recruiter. "That was a fun one for me personally.

"To be able to see that come to fruition and for him to actually sign with us was a lot of fun. You're talking about a unique kid. Coach Bielema talks about being uncommon, well this kid is really, truly. They broke the mold when they made him."

Said Turley: "He's a very violent person with his hands. He's very physical, and he enjoys the physicality of the game. His strength is unreal. I mean, it's unreal. I've never seen anyone like him, just as far as his overall body strength."

Bielema granted Agim's wish by giving him a single-digit jersey, No. 3, in spring drills, and Agim showed why he was so hyped in high school during his initial college work.

"You could see from Day One, just on his first few reps, why everybody wanted him," Lunney said.

"One of the things is he's got a great attitude," Arkansas defensive line coach Rory Segrest said. "He's very mature coming in as a freshman. He's got great direction, know what he wants to get done. I think he's a guy that has a good head on his shoulders, and he's got the physical tools to develop. I'm looking for some big things from him."

Agim, who was the All-Arkansas Preps defensive player of the year in 2015, got plenty of work at the "R" rush end spot in spring with returning starter Tevin Beanum missing most of the practices to deal with a personal issue. Agim also earned a first-team role in one of the team's nickel packages.

"We had expectations of him coming in, and he certainly met those in the spring," defensive coordinator Robb Smith said. "He got the chance to rotate in with the first-team defense at times, and just being on the field with guys like Deatrich Wise and Brooks Ellis, I think that goes a long way in a player's development."

Agim spoke of respect for his elders during spring drills.

"I do feel like I've got to prove myself because most of the D-line is seniors," he said. "They're not going to want me on the field if I can't compete with the best. So I feel like I have to come in and show that I can play right now and quick."

Agim -- whose nickname "Sosa" was given to him by friends who said he resembled a rapper named Chief Keef, whose nickname also is "Sosa" -- got started working on his name at Arkansas by taking a swing at 6-10 senior offensive tackle Dan Skipper after he got crossways with guard Hjalte Froholdt during a scrimmage.

"He's not going to back down from anybody," Turley said.

Agim said at the time "it's still love," and that "it's a family environment here," and he shook hands with Froholdt and Skipper after the incident.

He looks back fondly on his advancement through spring.

"The freshmen here are just now getting into the works, just now starting to work with us," Agim said. "It was a great decision for me to come in this early, because I know more of the playbook, more of the basics, know how to work out, know what's expected of me and things like that."

Soon it will be time for Agim to show the rest of the SEC his plan for greatness.