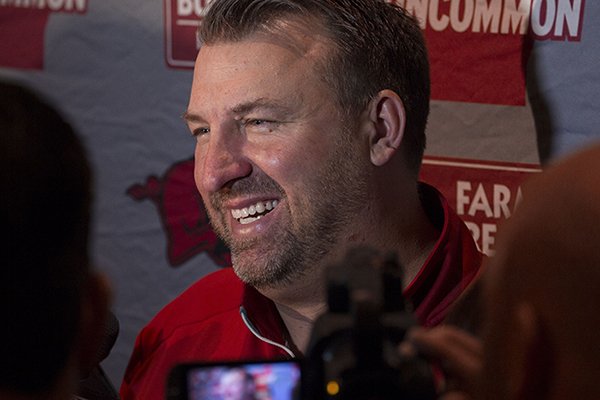 In addition, Arkansas has applied a noncompete clause within the SEC to all of their assistant coaches. The noncompete language does not apply if an assistant moves from a position coach to a coordinator or from a coordinator to a head coach.

Arkansas Athletic Director Jeff Long said the rising tide of salaries across college football is a product of a free-market system and the game's popularity, particularly in the SEC, which has seen a spike in revenues with the advent of the SEC Network in 2014.

Long said Arkansas still ranks in the SEC's lower half when it comes to paying assistants despite the substantial raises the past two years.

"I think we're trying to do things in a responsible manner based on our resources," Long said Thursday, speaking on KAKS-FM 99.5. "We are very proud to be one of those, I guess less than a dozen now, that are totally self-sustaining in our [athletics] program.

Bielema said he knew some raises would be in store after the Razorbacks had one of the program's most productive offensive seasons.

"I feel very blessed," Bielema said. "Jeff gave me a certain amount of money before we even hit January. Back in December he gave me a large chuck of change that I could use to [divvy] amongst my staff."

Bielema publicized new Georgia Coach Kirby Smart's interest in Enos in December, which helped secure a pay bump of $150,000 for the former Central Michigan head coach who will be entering his second year as the Hogs' offensive coordinator. Enos will make $700,000 in 2016.

Bielema was able to save money with the hiring of offensive line coach Kurt Anderson, who had three years of NFL experience on his resume. Anderson came on board at $370,000, which is $155,000 less than that made by his predecessor Sam Pittman, who also held the title of assistant head coach. Pittman received a large boost in pay before ever coaching a game at Arkansas when Alabama showed interest in the winter of 2012-2013.

"As staff transition happened, I kind of would grab some [funds for assistant coaches] and then would lose some, and as I hired a staff I was able to complete it with the hiring of Paul," Bielema said. "So basically everybody on staff got a new contract."

Arkansas' 2015 salary pool for assistants ranked No. 19 nationally in a USA Today survey, which listed the cumulative pay at $3,529,550 because it included a mix of bonuses.

Rhoads, who spent the past seven seasons as the head coach at Iowa State, said head coaches have to be strategic in doling out money.

"You've certainly got to have an administration that supports you and recognizes what you have to do to keep coaches and reward coaches," Rhoads said. "This level of football is highly competitive, and that's not going away.