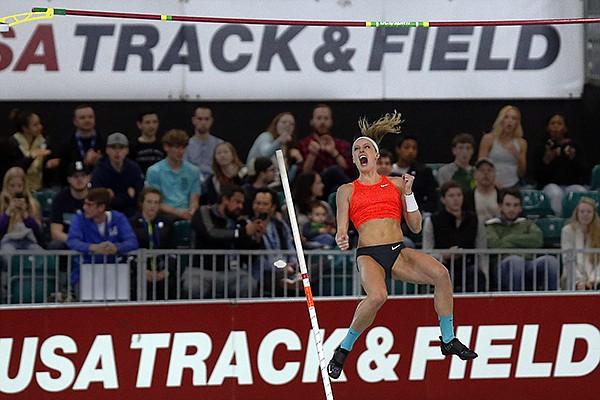 Sandi Morris exults as she clears the winning height in the women's pole vault at the U.S. indoor track and field championships in Portland, Ore., Saturday, March 12, 2016. (Andy Nelson/The Register-Guard via AP)

Instead Sandi Morris won her first.

Morris now ranks third all-time in the pole vault indoors behind Suhr and Russian Yelena Isinbayeva, 33, who cleared 16-5 1/4 in 2012.

"To win it against a gold medalist and indoor world record holder, Sandi announced, 'I belong here. I'm OK with this. I know what it takes,'" said Arkansas field events coach Bryan Compton, who continues to train Morris. "She had done some great things in college, but she'd never gone 16 feet before.

"That's a big barrier for a vaulter to get over. It's a huge confidence boost for her."

Morris, 23, and Suhr both earned spots in the World Indoor Championships, where they'll compete Thursday night in Portland at the Oregon Convention Center.

"I definitely think Sandi can win again, but Jenn Suhr is not going to lay down," Compton said. "She's going to be like, 'I'm the world record-holder and I'm coming for you now little girl.' I know the mentality of her camp."

Suhr hugged Morris after her victory.

"She congratulated Sandi for joining the 16-foot club, but she's there to win, too," Compton said. "She's from New York and she's tough. That's why she won the Olympic gold medal."

"My perception has really changed over the last year," Morris said. "When I got silver to her in 2014, I was beyond stoked with silver.

"To get silver behind the world record-holder and Olympic gold medalist Jenn Suhr, I was so proud and so happy.

"But in 2015 when I really improved a lot and started jumping in the high 15s … that was a realization point to me that I could win it rather than be happy with silver."

Morris for a time held collegiate indoor (15-3 1/2) and outdoor (15-5 3/4) records last year and cleared 15-5 to take fourth at the World Outdoor Championships in Beijing. Prior to last weekend, her personal-best as a professional was 15-9 3/4 at a meet in Joplin, Missouri.

Going over 16 feet, Morris said, was a breakthrough for her mentally as well as physically.

"I hadn't been giving myself enough credit in thinking silver was all right," she said. "To win gold, this is a big turning point for me.

"It's been a realization that I could be the best not only in the U.S., but in the world. It's a dream come true. It's really crazy."

Compton said that in the two weeks prior to the USA Indoor meet, Morris attempted 16-2 3/4 numerous times in practice, but never cleared it until a title was on the line.

"It was one of those deals where it was, 'How are you missing this? You've got this,'" Compton said. "She just had to get it done, and she pulled it off."

Morris cleared 15-7 on her third attempt, then missed her first attempt at 15-11.

In third place behind Suhr and Stephen F. Austin senior Demi Payne, Morris decided to pass her remaining two attempts at 15-11 and move up to 16-0 3/4, which she cleared on her second attempt.

Compton said Morris didn't have any practice vaults on the runway in Portland prior to Saturday night because her flight was late arriving last Thursday and the track was closed Friday.

"She told me, 'Coach, it's OK. It doesn't matter,'" Compton said. "She just showed up and said, 'We're going to do this.' She didn't let anything bother her."

Compton said Morris continues to work through some technical flaws in her approach and soon should begin using a bigger pole she can grip higher to provide a greater push-off.

"I don't think there really is a ceiling for her," Compton said of Morris' potential. "She knows she can do a lot more. She just has to get more consistent."

"We're trying to not overshoot our bounds, because we're not there yet," Compton said. "We don't have the right technique yet on the takeoff to jump on 15-foot poles, but we're getting close.

"We're not going to do it indoors, but outdoors we're going to bust out the 15-footers, and I think it's really going to be something to watch."