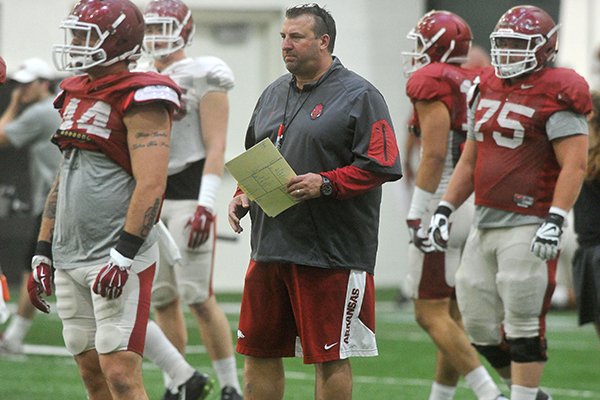 Some of Bielema's original summer camp plans have been short-circuited by territorial defenses, and others have had to be adjusted. But while the door to the so-called "satellite" camps is open, Bielema intends to take full advantage.

"Everybody wants to talk about opportunities. Well, you're about to get multiplied on opportunities," Bielema said earlier this month after the NCAA board of directors rescinded a ban on the satellite camps.

Today marks the start of a period in which Division I college football programs can send coaches or other football-related personnel to camps across the nation -- or the globe. Arkansas coaches will participate in a camp with college coaches from across the state in Little Rock on June 5. Bielema also has plans to attend a camp hosted by Florida Atlantic University and Coach Charlie Partridge, the former Arkansas defensive line coach, on June 13. Plans for more camp visits, which have to take place in a pair of declared 15-day windows, are in development.

This year, most schools are using their two windows between now and the end of June, said Jon Fagg, Arkansas senior associate athletic director for development and administration. Will Landreth, the UA's director of compliance, said all the camps this summer must take place in weeks that fall within June or July.

Once forbidden by the SEC, the camps -- which ostensibly are not to be used for recruiting purposes -- allow coaching staffs to be seen and to provide hands-on skill instruction to prospects.

"I think for us here at Arkansas, it's given us a chance to have more exposure," Bielema said May 5, adding that there were "a few global opportunities" -- such as in the Bahamas or Europe -- he was exploring.

Bielema, speaking at the annual L'Arche football preview banquet in Mobile, Ala., on Thursday, said his camp plans have had to be scrambled or scrapped in some instances because of competitors.

"We were in a partnership with a school in Louisiana to go in and do one in New Orleans, but certain people in Louisiana didn't want to see that happen," Bielema told AL.com. "So all of a sudden that was removed.

"There's all these outlying factors that no one really thought about. I understand it. I don't want anybody [from out of state] doing one in Arkansas."

The camp in Texas that Bielema referred to was one Arkansas was planning to work with Texas A&M Commerce at AT&T Stadium in Arlington on June 9. Texas A&M is Arkansas' rival in the SEC West. Abilene Christian then emerged as a potential host before the camp fell through completely.

Fagg said the SEC had been content in years past to stay away from camps that were not based at a school's campus.

"What we talked about was satellite camps were, overall, actually stressful on the system," Fagg said. "It forces coaches to be out a lot more when one of the express purposes of camps is to not recruit."

The SEC proposed a rule banning satellite camps, which was adopted in April by the NCAA's Division I Council. The Division I board of directors rescinded the ban April 28.

Bielema was one of the leading voices among SEC coaches who were ready to act on the off-campus opportunities. Now that the SEC is involved, it changes the level of discourse associated with the camp debate, Fagg said.

"Like the SEC does in a lot of things, it just amps up the intensity, and that ends up being what happened," Fagg said. "It amped up the national debate, the conversation about whether they're smart or not smart, helpful to schools or kids or whatever."

Landreth said the camps are turning into tryouts, which runs counter to the original intent.

"You evaluate, but you can also put your hands on kids to say, 'You're not 6-4, you're 6-2. And let me see your arm strength,' " Landreth said. "It's supposed to be a camp experience, but they get to 'try them out,' quote, unquote.

"You get to do it for 30 minutes, and that's where [Bielema] is talking about the wild West of moving around to so many locations and only being there for a minimal amount of time to truly get something out of it."

Second-year Michigan Coach Jim Harbaugh, whose program incurred a bill of nearly $350,000 to conduct spring break practices at the IMG Academy in Bradenton, Fla., has led the charge for satellite camps. Harbaugh criticized opposition from the SEC and the Atlantic Coast Conference in April and set up an ambitious schedule of camp visits called Swarm Tour Part II, with stops in Mississippi, Alabama, Texas, Georgia and elsewhere this summer.

Last year, Harbaugh and his staff traveled to football hotbeds across the country between June 4-12. He had planned to attend ProKick Australia this Friday, but that trip wound up being scrapped because of NCAA rules.

The coming month is almost certain to produce controversy and commentary regarding the application of rules, and satellite camps are guaranteed to be a hot topic at the SEC spring meetings, which begin this week in Destin, Fla.

"Big picture, it seems like this issue is going to be re-evaluated after this period after we see how crazy it is," Fagg said.