NO. 10 FLORIDA AT ARKANSAS:

Just a bit defensive: Florida shuts down, shuts up opponents 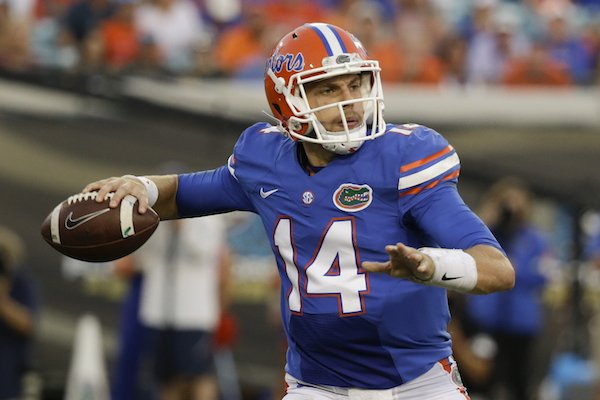 Florida quarterback Luke Del Rio throws a pass against Georgia during the second half of an NCAA college football game, Saturday, Oct. 29, 2016, in Jacksonville, Fla.

FAYETTEVILLE -- The last time Florida played at Arkansas, Tim Tebow led the Gators to a 38-7 victory.

Bobby Petrino was in his first season as Arkansas' coach and somebody not named Allen -- Casey Dick -- was the Razorbacks' quarterback.

Bret Bielema was a bachelor in his third season as head coach at Wisconsin.

Yeah, it's been a while since Florida played at Reynolds Razorback Stadium.

Jim McElwain, 16-5 in his second season at Florida, has been to Arkansas twice previously as Alabama's offensive coordinator in 2008 and 2010 when the Crimson Tide beat the Razorbacks 49-14 and 24-20. He praised the "cool" environment at Arkansas.

"I'm looking forward to our guys experiencing that," McElwain said Monday at his weekly news conference. "That's what playing at a place like Florida is all about, is those opportunities to go in and match yourself in an uncomfortable place. It should be a lot of fun.

"They've got a heck of a ball squad and they do a lot of things that give you troubles."

Auburn had no trouble beating Arkansas 56-3 Oct. 22 in the Razorbacks' most recent game.

"Everybody points at, obviously, what happened in the Auburn game," McElwain said. "I think that was kind of an anomaly a little bit.

"It got out of hand, maybe became a little uncomfortable in what they had to do offensively once they got thundered early. It took them out of their normal game.

"But, I will say, they're physical. They understand what they want to do and how to do it. They're very sound on both sides of the football."

"Bret's done an outstanding job with that program," McElwain said. "And what they've done as a program in November, I mean, take a look at that."

The Razorbacks are 6-3 in conference games in November the last two seasons, but suffered their most-lopsided loss ever to an SEC opponent at Auburn.

"I know what kind of pride they have in their program and their organization to come back and prove that, 'Hey, that was one of those one-hit deals that happened,' " McElwain said. "At the same time, I'm really more concerned about us and how we go about the week of preparation."

"I feel like we're the Florida Gators and everybody gives us their best shot no matter what," Cox said. "So you can't really take their last game as what we're going to see, because we're going to see something completely different."

The Gators are in control of the SEC East thanks to Tennessee (5-3, 2-3) struggling since beating Florida and Georgia. The Vols have lost consecutive games to Alabama, Texas A&M and South Carolina.

Florida beat Georgia 24-10 in an afternoon game last Saturday, and the Gators were home in time to enjoy South Carolina's 24-21 victory over Tennessee.

"It was awesome to see South Carolina take care of them," center Cameron Dillard said. "It's always good to see Tennessee lose. No one likes Tennessee."

Florida leads Kentucky (5-3, 4-2) by a game in the loss column and the Gators also beat the Wildcats head to head. That prompted a question to McElwain about whether that cushion could cause the Gators to suffer a letdown.

"Any time you become comfortable and start to look ahead and not take care of the now, that's when you get in trouble," McElwain said. "That's why I think this is a great opportunity to define kind of what we're all about."

"I think we're playing to the strengths of our football team right now," McElwain said. "I mean, that's part of the evolution of recruiting to your program and your wants on either side of the ball."

Del Rio has completed 52 of 95 passes for 637 yards and 6 touchdowns with 3 interceptions.

"I think he manages the game pretty well," Arkansas defensive coordinator Robb Smith said. "He's a good decision- maker. I think he knows exactly what they want him to do within the offense."

Florida has moved up the national rankings since opening the season No. 25 in The Associated Press poll, but the Gators feel a lack of respect.

"I feel like people always love to hate the Gators," Cox said. "They don't ever want to give us our respect or props, so we have to kind of go and take it ourselves.

"We're still a very hungry team. This top 10 doesn't mean anything to us. We feel like we should be up there higher. So we have to continue to push and work every day at it."

Dillard said it's fine for others to question the Gators, who have beaten one team -- Kentucky -- that has a winning record.

"We'll go out there Saturday and do what we need to do to take care of the job."