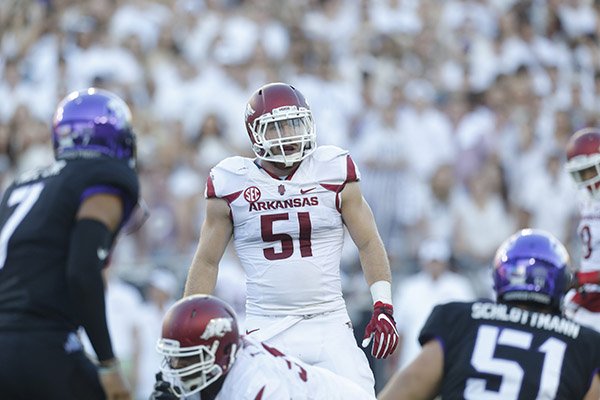 Arkansas linebacker Brooks Ellis (51) lines up during a game against TCU on Saturday, Sept. 10, 2016, in Fort Worth, Texas.

The other finalists announced Tuesday by the National Football Foundation for the academic Heisman are:

Each finalist receives an $18,000 postgraduate scholarship. The winner will be announced Dec. 6 at the National Football Foundation's Hall of Fame banquet in New York.

The winner will receive an additional $7,000 in scholarship money and the Campbell Trophy.

Hill missed most of the last two seasons for BYU with serious injuries. He is pursuing an MBA and is the only player in school history with 4,000 yards passing and 2,000 receiving in a career.

Terrell is also pursuing an MBA while leading No. 17 Western Michigan to its first ranking in the AP Top 25 in school history.