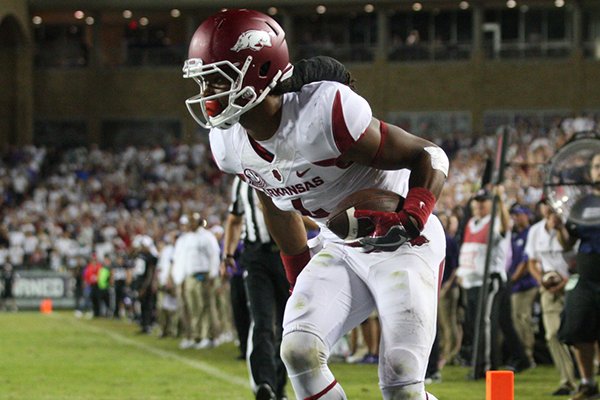 Arkansas receiver Keon Hatcher catches a touchdown during the fourth quarter of a game against TCU on Saturday, Sept. 10, 2016, in Fort Worth, Texas.

FAYETTEVILLE — Michael Smith was not a happy camper when Arkansas traveled to Florida during his and Bret Bielema’s first year with the Razorbacks in 2013.

The game didn’t go Arkansas’ way, unraveling into a 30-10 Gators win. And Smith, the Hogs’ receivers coach, was livid about how his receivers were treated.

“It was my first experience in the SEC where I was irate, as a football coach, because I’ve never seen so many people get away with the stuff they got away with,” Smith said. “But over the years, I’ve adjusted. I know my players have.”

The Gators have a different coaching staff now, with Jim McElwain replacing fired Will Muschamp after the 2014 season. But they still feature a group of physical, talented cornerbacks who figure to challenge Smith’s talented crop of veteran receivers.

Arkansas has faced talented secondaries before. The Hogs threw for more than 400 yards against No. 1 Alabama and average 256.4 yards per game, third-best in the SEC.

But Florida has the best pass defense in the SEC. The Gators allow just 134.3 yards per game, nearly 50 less than No. 2 South Carolina. Opposing quarterbacks have completed just 39.3 percent of their passes and have five touchdowns against 10 interceptions. Light schedule or not, those are impressive figures.

“It’s definitely going to be a tremendous challenge for us this week from a receiver position, but, like always, I’m very confident our kids are going to step up and play well,” Smith said. “We’re looking forward to it.

“…We’re expected Florida to give us their best. I don’t want anybody to look on film and think they’re playing against a bunch of slouch receivers. I think we’ve earned that.”

The Gators’ secondary is headlined by arguably the best cornerback in college football: junior Jalen ‘Teez’ Tabor. The 6-foot, 199-pounder has four interceptions and has established himself as a shutdown presence who will potentially go early in the first round of the draft.

Tabor’s high profile will give Arkansas veteran receivers, like senior Keon Hatcher, an opportunity to showcase their skills against a player ranked the top cornerback and No. 5 overall player in the 2017 NFL Draft by NFLDraftScout.com.

“I like going against the top guys,” Hatcher said. “Guys that they’re high on, I want to go out there and show them my worth and that I can play at a high level, too.”