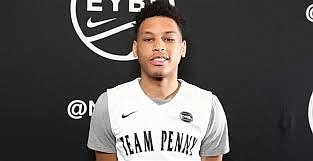 Garland, who averaged 18 points and 8 rebounds while leading his team to a Class 6A state title last season, was the last of the trio to take his official visit and did so this weekend.

He got to see Arkansas’ 94-44 exhibition win over Division II Emporia State on Friday night in the last tune up before the season opener this upcoming Friday with Fort Wayne.

“I thought the guys really played a really good game and are coming together good,” Garland said.

He also got a chance to take in Arkansas’ 31-10 upset of No. 10 Florida in college football on Saturday.

“The football game was great,” Garland said. “We got the upset victory and it was a great atmosphere.”

Garland, ranked 55th nationally in the country by ESPN, Gafford (48th nationally) and Hall - another four-star just out of the top 100 - all plan on signing in the early period.

“Me and the other guys are bonding great,” Garland said. “And the ones already here are taking me in like I am already on the team.”