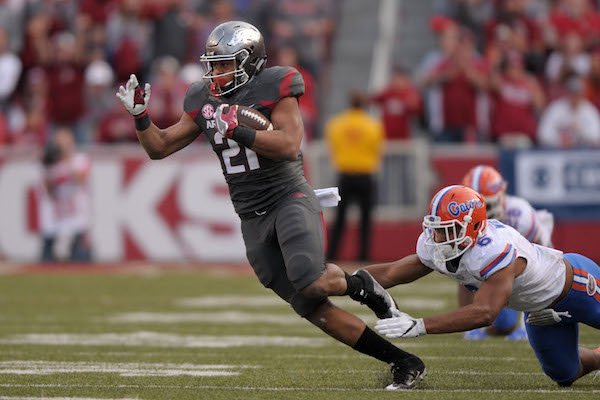 Devwah Whaley (21), Arkansas running back, breaks the tackle of Florida defensive back Quincy Wilson (6) on Saturday Nov. 5, 2016 during the game in Razorback Stadium in Fayetteville.

FAYETTEVILLE -- Coaches inevitably tell their teams that one game doesn't define your season.

On the other side, there is the story of interim coach John L. Smith's 2012 Razorbacks, a teams ranked in the top 10 during the preseason, losing as a 30-point favorite to Louisiana-Monroe in Little Rock.

That disaster indelibly defined Arkansas' 2012 season, even with 10 games to play. It made understandable the 52-0 and 52-7 shellackings in 2013 suffered by the shambles that Bret Bielema inherited.

But nobody understood Bielema's 2016 Razorbacks getting annihilated 56-3 three Saturdays ago at Auburn.

The Razorbacks went into their Oct. 29 Saturday bye week knowing they had a definition to erase.

"That ain't going to define us," sophomore cornerback Ryan Pulley said, assertively. "We put that behind us during the bye week."

Now Florida is behind them, too. The Razorbacks (6-3, 2-3 SEC) redefined themselves gashing the then No. 11 Gators, 31-10 last Saturday at Reynolds Razorback Stadium.

His challenge started while still in Auburn, Ala. So did his reminder that Arkansas had won five, two over Top 15 teams, and his line had helped running back Rawleigh Williams and quarterback Austin Allen statistically lead the SEC.

"I brought the offensive line up right after the game in the locker room and told them we can't allow this game to define us or how this season goes," Anderson said. "Going into that game you don't have the leading rusher the SEC and the leading passer in the SEC without doing good things up front. That's kind of the message."

"We all decided we wanted to come out and prove a point," Austin Allen said. "The team that came out against Auburn is not us, and it will never happen again."