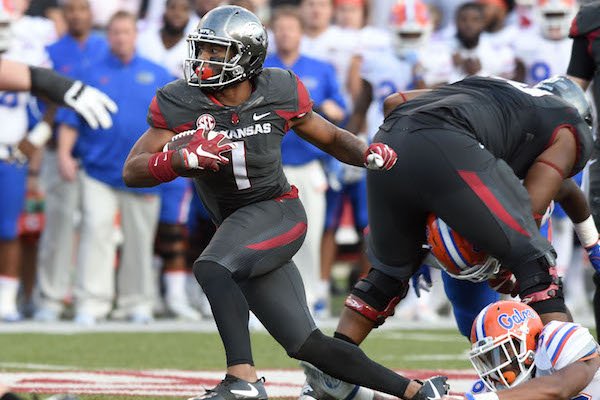 University of Arkansas receiver Jared Cornelius tries to get away from florida defender Cece Jefferson as he runs for a gain in the 4th quarter Saturday, November 5, 2016 during the Razorbacks 31-10 win at Razorback Stadium in Fayetteville.

FAYETTEVILLE -- Arkansas is eligible to go bowling for the third consecutive season.

Now the question is how high the Razorbacks will find themselves in the SEC's bowl pecking order when the regular season ends.

Bowls figure to have increased interest in Arkansas after the Razorbacks (6-3, 2-3 SEC) pounded Florida 31-10 Saturday.

Going to a bowl means not only another game and nice gifts, but an extra 15 days of practice. The additional practice time is especially valuable for players redshirting.

"You always want to get that extra game," Arkansas quarterback Austin Allen said. 'You want to go 12-0 and go to the SEC championship game and then play for the national championship, but if that's not happening, then get bowl eligible as fast as you can.

"If you do it now, that means you're having a pretty good year."

Arkansas logged its first victory over Florida since joining the SEC in 1992. The Gators were 9-0 vs. the Hogs.

The only time the Razorbacks had beaten Florida was 28-24 at the Bluebonnet Bowl in 1982. The postseason game in Houston is now known as the Texas Bowl, where the Razorbacks beat Texas 31-7 in 2014 to finish 7-6.

"Yeah, we're bowl eligible and that's always great, but we're not satisfied with that," safety Santos Ramirez said. "The past two years, we had some good bowls, but that's not where we want to be.

"We want to get to the best bowl we can. We want to make sure we continue to do what we've got to do and win out."

The College Football Playoff committee poll determines 12 teams for the Rose, Sugar, Cotton, Orange, Fiesta and Peach Bowls, then the Citrus Bowl has the first pick among SEC teams to match with a Big Ten team.

It will be interesting to see if bowls in Orlando, Tampa and Jacksonville, which normally lean to the East might be more interested in inviting West teams with stronger resumes.

"I think we just got the appetizer," Arkansas wide receiver Drew Morgan said. "The entree and the desert is still out there on the table. We're still eating."

The Razorbacks played hungry and angry against Florida after losing at Auburn 56-3 two weeks ago.

The extra motivation, along with an open date to heal up physically and make some adjustments in their schemes, helped them rout the Gators.

Florida (6-2, 4-2) came into the game leading the SEC East and ranked 11th in the College Football Playoff committee poll, but was outgained by the Razorbacks 466 to 241 in total offense.

The next CFP poll is not released until Tuesday, but Florida is certain to fall after dropping from No. 10 to No. 22 in the Associated Press Top 25 and from ninth to 16th in the USA Today/Coaches poll.

Arkansas didn't not crack either poll: The Razorbacks received 74 points, second-most of any team not in the top 25 of the AP poll; Arkansas received 54 points in the coaches poll, making them the team with third-most points not to make the top 25.

"We think we're one of the best teams in the nation," Ramirez said. "We may have our setbacks. We may not play a full four quarters all the time, but when we do, this is what can happen."

The Razorbacks finish the regular season at home against LSU Saturday night, then finish at Mississippi State and Missouri.

"We play a great team in LSU next week, and we've got to have the mindset we did coming into this week," Allen said. "We can't have a letdown.

"We've got to have the same chip on our shoulder and really, really get after it this week in practice and in the film room."

Arkansas is 6-3 in November since 2014, including five victories over nationally-ranked teams.

"I'd say November is a celebration month for Arkansas, and it's just the beginning," Morgan said. "I'm not trying to forecast anything later, but we're one of those teams that gets better as the season goes on and is very dangerous."