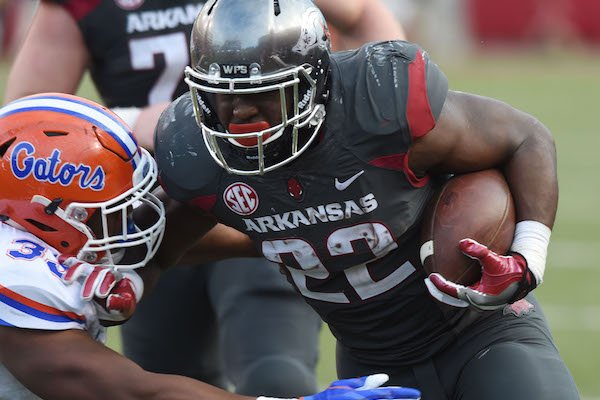 University of Arkansas running back Rawleigh Williams III tries to get past Florida defender David Reese in the 4th quarter Saturday, November 5, 2016 during the Razorbacks 31-10 win at Razorback Stadium in Fayetteville.

FAYETTEVILLE -- Arkansas Coach Bret Bielema ordered a full slate of full-pad practices last week to stress the style of play he wanted against No. 11 Florida.

The Razorbacks responded with a 31-10 rout of the Gators, the follow-up to the Razorbacks' humiliating loss to Auburn on Oct. 22.

"We were really physical this week in practice," Bielema said. "We went full pads the whole time, which we don't normally do. I wanted to establish the physicalness and mentality and obviously they responded."

Bielema has typically reduced the amount of full-pad workouts the Razorbacks go through as the season progresses, especially toward the end of a long stretch of consecutive games. Arkansas' 56-3 loss to Auburn came on its eighth consecutive playing date.

But this was different.

"I think it helped pay dividends for us, coming out and being physical and having that mentality to win every play," defensive lineman Jeremiah Ledbetter said. "That carried from practice over to the game."

Bielema said teams that try to play with finesse against Florida's defense are making a mistake.

"We knew we needed to kind of take it at them," Bielema said. "They're a very athletic group. If you don't come downhill at them, you're going to play to their strength. So I thought it was a great game plan for our guys and great execution by our players."

Florida's rushing total was 531 yards less than the 543 yards amassed by Auburn two weeks ago, a record for an Arkansas opponent.

"To come out of that game and realize we couldn't stop the run, I said, 'I don't care what we do, we're going to stop the run on defense. I don't care if we play 11 guys, if we have to play with 12, I'll take the penalty,'" Coach Bret Bielema said. "We ain't going to have somebody run the ball on us.

"I think they had 12 yards on us today. That message was delivered and sent and accepted."

"The time we had put into it, Coach [Robb] Smith is one of the best at what he does, so he knew what we lacked in the Auburn game and we knew we had to capitalize on it in this one," Agim said.

Former Razorback Trey Flowers' pregame message had to do with dogs and eating, Bret Bielema and Arkansas players said after the game.

Receiver Drew Morgan said Flowers described two types of dogs: house dogs, who are always being fed, and alley dogs, who have to fight for their food every day.

"He's basically always hungry and has to work to eat," Morgan said. "The moral of the story is you either go eat or get eaten."

Said Bielema, "I can't give you his exact words, but they were along the lines of every day in this world you've got to find ways to eat. Every day that guy across from you is trying to take away your food. ... We kind of had a little motto out there today, 'Everybody's hungry and nobody's getting full until the end.' Obviously I can eat with the best of them, I was staying hungry as well."

Arkansas nearly played its way back into the national polls with its 31-10 victory over No. 11 Florida. The Razorbacks are second behind Southern California in the others receiving votes category of the Associated Press Top 25 poll. Arkansas received 74 points, two behind the Trojans and 16 behind No. 25 Baylor.

The Razorbacks are three spots out of the USA Today Coaches poll, with their 53 poll points trailing USC (79) and San Diego State (58) among others receiving votes.

Arkansas will play its sixth consecutive ranked SEC opponent and its seventh ranked opponent overall on Saturday. LSU is No. 19 in both the AP and coaches' polls. The second College Football Playoff rankings of the season come out on Tuesday.

Arkansas had good success with a stretch play to both sides of the line, running it a handful of times against Florida. The most critical of those was Rawleigh Williams' 41-yard burst over the left edge to cap the scoring with 5:40 remaining.

"It's just a stretch play. We ran it a lot today," Williams said. "I knew when they called it that it was going to open up."

Left guard Johnny Gibson pulled around left end and got a block, while tight end Jeremy Sprinkle and left tackle Dan Skipper were sealing the edge. Center Frank Ragnow drove his man up and out, creating the final lane for Williams, who accelerated through the gap and broke an ankle tackle from safety Nick Washington at the 7 before tracking into the end zone.

CBS analyst Aaron Taylor called the run a "pull and pin" play and diagrammed the key blocks for Williams.

"I thought they had some good angle blocks," Florida Coach Jim McElwain said. "They did a good job controlling our inside guys. That pull stuff was really effective."

Arkansas will host LSU at 6 p.m. on Saturday at Reynolds Razorback Stadium, the SEC office announced late Saturday. The Battle for the Boot will be shown on ESPN.

CBS chose the Auburn at Georgia game for it's prime 2:30 p.m. broadcast on Saturday. ESPN had the next choice, and picked the LSU-Arkansas game.

Arkansas Coach Bret Bielema said left guard Hjalte Froholdt, who had his right ankle rolled up in the second quarter and was taken directly into the locker room for further examination, probably could have returned if the situation demanded against Florida.

Johnny Gibson, making his first start at right guard, moved over to Froholdt's spot and Jake Raulerson came in to play right guard after Froholdt went down.

"He could have gone," Bielema said of Froholdt. "I think it kind of scared him a little bit. He got rolled up on and it swelled up a little bit."

Florida held what amounted to a two-game lead in the SEC East, based on its head-to-head victory over Kentucky, coming into the Arkansas game.

Now, after Florida's loss to Arkansas Kentucky's loss to Georgia, the Gators hold a one-game lead over Tennessee and Kentucky in the loss column, but they would lose a head-to-head tiebreaker to the Volunteers.

Florida Coach Jim McElwain said he didn't think his team was thinking about their advantage in the East before Saturday's loss.

"I don't think they were," he said. "This is one of those games that during the summer, when you looked at the schedule and where it lied, you kind of were like, 'I wonder what's going to happen?'

"The East is a long ways away. ... We've got a long road ahead of us, but we'll get started tomorrow."

Williams, a sophomore from Dallas, rushed for 148 yards and 2 touchdowns, including a career-long 41-yard touchdown run. Williams is second in the SEC and 22nd nationally with 106.1 yards per game and 45 yards shy of his first 1,000-yard season.

Ramirez, a sophomore from Shreveport, La., intercepted a slant pass tipped by the junior Liddell on Florida's first offensive snap and returned it 24 yards for a touchdown. Ramirez had a team-high 5 tackles. Liddell, from Pine Bluff Dollarway, also had an interception and 2 tackles.