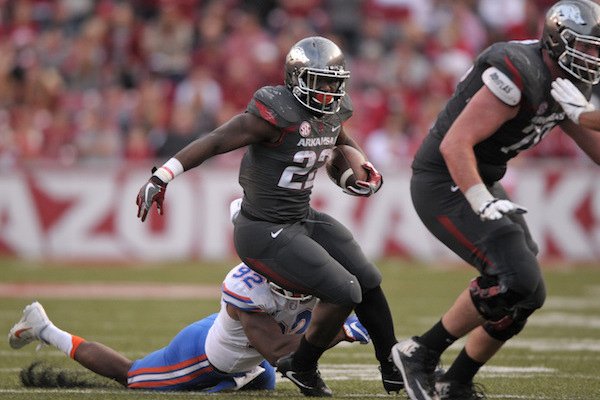 Rawleigh Williams III, Arkansas running back, breaks the tackle of Jabari Zuniga, Florida defensive end on Saturday Nov. 5, 2016 during the game at Razorback Stadium in Fayetteville.

FAYETTEVILLE -- Arkansas offensive coordinator Dan Enos touted Rawleigh Williams' performance in Saturday's 31-10 victory over No. 11 Florida as the best of the sophomore's career.

Williams was named SEC offensive player of the week for the second time this season after rushing for 148 yards and two touchdowns against the Gators. Williams also had two catches for 22 yards and totaled 170 all-purpose yards.

"His best game," Enos said. "He broke tackles, he showed a burst, he ran hard. He was physical. The most physical I've seen him this year.

"I think that was by far his best game, and yards after contact. He really, really played a great football game. He had a couple runs in there that we didn't even block all that great, and he ended up getting 8 yards on one and I think 12 on another."

Williams is the first SEC player to be named offensive player of the week honors twice this season. The 5-10, 226-pounder scored on a 6-yard touchdown run up the middle in the first quarter, then iced the game with a 41-yard scoring run on a stretch play over the left edge in the fourth quarter.

"That was definitely what we focused on the last two weeks is being able to run the ball," Williams said. "Everything else will open up because of that, and it did [Saturday]."

Arkansas Coach Bret Bielema said he thought Williams and freshman Devwah Whaley had their best 1-2 punch together against a quality defense. Whaley accounted for 135 all-purpose yards, 66 rushing and 69 receiving, against the Gators. Whaley amassed 73 all-purpose yards on Arkansas' second series, a 91-yard touchdown march that ended on Williams' 6-yard run for a 14-0 lead.

Arkansas took over first place in the NCAA Football Bowl Subdivision in time of possession after holding an advantage of 39:21 to 20:39 against Florida in that category.

The Razorbacks average 35:45 of possession time per game. Arkansas had been third in the FBS, behind Army and Utah, in that department heading into the Florida game.

Florida entered the game ranked second behind Arkansas in the SEC and 15th in the FBS with an average of 33:45 per game.

Arkansas' road game at Mississippi State on Nov. 19 will kick off at 6 p.m. and will be broadcast on either ESPN2 or ESPNU, the SEC office announced Monday. CBS picked the Missouri at Tennessee game that day for its 2:30 p.m. broadcast.

The Razorbacks will have played eight games at 5 p.m. or later this season, meaning they will have four day games: the season opener against Louisiana Tech at 3 p.m., the Florida game at 2:30 p.m., the Alcorn State game at 11 a.m., and the regular-season finale on Nov. 25 at Missouri at 1:30 p.m.

Arkansas Coach Bret Bielema said sophomore guard Hjalte Froholdt, who suffered a sprained ankle in the second quarter of Saturday's game, is expected to return to practice this week, if not today then probably by Wednesday.

Bielema said Froholdt was having probably his best game of the season before being injured during a 3-yard run by Rawleigh Williams with 11:03 left in the second quarter. Johnny Gibson, who was making his first career start at right guard, moved to Froholdt's spot and Jake Raulerson, who had lost the starting assignment to Gibson, came in at right guard for the rest of the game.

Arkansas defensive coordinator Robb Smith said defensive assistants Vernon Hargreaves, Paul Rhoads and Rory Segrest and the players did a "phenomenal job" bouncing back from the Hogs' 56-3 loss at Auburn during the victory against Florida.

"I thought Rory, Vernon and Paul did a great job getting guys in great spots ... and just focused on the process and the practice," Smith said. "We prepared really well."

Arkansas held Florida to 12 rushing yards and 241 yards total offense. Florida came into the game ranked sixth in the nation in third-down conversion percentage (.504), but the Gators made just 1 of 11 third-down plays against Arkansas.

"I think our guys will be the first to tell you that confidence comes from two things: Preparation and action," Smith said. "I thought the preparation has been there. When you get some positive action going, that's when the confidence comes. ... We got off to a good start and I think that impacted the game."

Offensive coordinator Dan Enos indicated the plan this week in preparation for Saturday's game against LSU was to practice in full pads both today and Wednesday as the Razorbacks did for three practices last week.

"We have to continue to remind our guys that the season isn't over yet," Enos said. "It's just begun, in a way. We have three huge games and this game is going to be another brutal, physical game against a good team, that if we don't show up and play desperate and play with a chip on our shoulder, they can beat us very easily."

Arkansas defensive lineman Jeremiah Ledbetter, whose return to end last week was one of several defensive switches that fueled a strong defensive performance against Florida, said he got tired of hearing about the Gators' great defense last week.

"All we heard we during the week was Florida's defense this and that," Ledbetter said. "But we know what we can do as a defensive unit if we come out and perform to the best of our abilities. That did play a little role in how we played, but overall we just got after it."

Florida entered the game leading the SEC and ranked second nationally in total defense, but the Gators dropped to second in the SEC behind Alabama and third in the country after allowing 466 total yards to Arkansas.

Senior Adam McFain from Greenwood improved to 5 for 5 on field-goal attempts Saturday.

The Razorbacks sacks went to Randy Ramsey (12-yard loss), Bijhon Jackson (minus-7 yards) and a combo sack for Jeremiah Ledbetter and Deatrich Wise (minus-3) at the Florida 1.

Florida took a beating, literally and figuratively, in its loss to Arkansas, with eight players going down on the field with injuries. That list didn't include quarterback Luke Del Rio, who has been ruled out for the Gators' game on Saturday against South Carolina with a shoulder injury he apparently suffered in the second quarter.

In addition, linebacker Alex Anzalone suffered a broken arm, receiver Chris Thompson did not return after being laid out by Damon "Duwop" Mitchell on a kickoff return, and center Cameron Dillard did not return with a knee injury after being rolled up by teammate David Sharpe. Linebacker Jarrad Davis, re-aggravated an ankle injury and went down, but he returned to the game.

Receiver Tyrie Cleveland went out with an undisclosed injury and defensive end Cece Jefferson (foot) is questionable for Saturday.

• Former Razorback Eddie Jackson, who now has a show, BBQ Blitz, on the Food Network, will be the speaker for Wednesday's Northwest Arkansas Touchdown Club luncheon at Mermaids Seafood Restaurant in Fayetteville. Meet and greet starts at 11:30 p.m., and the program begins at 12:05 p.m.

• ESPN analyst Kirk Herbstreit named Arkansas' victory over Florida as his No. 3 performance of the week, behind No. 1 Mississippi State, which upset Texas A&M, and No. 2 Alabama, which won 10-0 at LSU.