Bielema expects to be emotional about Arkansas' seniors 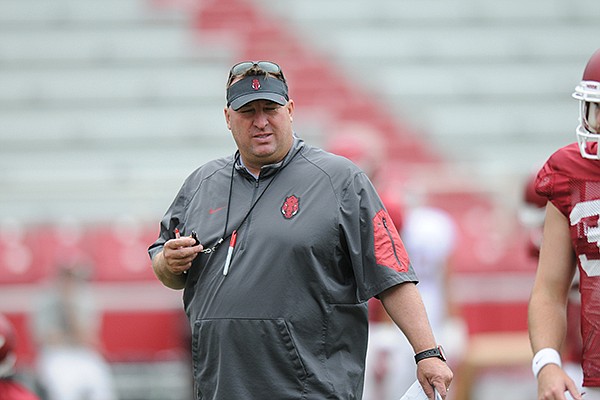 FAYETTEVILLE — Arkansas head football coach Bret Bielema has been called many names in his coaching career - some positive and some negative.

He came up with a new one during Wednesday’s SEC Teleconference that he doesn’t want to be called, but might be labeled with on Saturday - Betty Boohoo.

“Well you know, one of the common things I said to my players when I first took over, I got emotional in our first team meeting,” Bielema said. “I didn't even know these guys.

“I think that when you're a man and you care enough to cry, it shows a side of you that you shouldn't be ashamed of. I don't wanna be known as a Betty Boohoo, but on the same account, I don't find anything wrong with it if you feel emotional or strong about something to wear it on your sleeve.”

Bielema talked about the process of how he will introduce the seniors.

“We did the list three years ago on our seniors, just putting them in order,” Bielema said. “I always do the captains, the last four captains, last and you just kinda work your way through from playing time to what they've contributed and I got emotional writing their names down.

“It's gonna be a tough day. My wife will give me a box of hankies and put them in my back pocket and we'll start that senior introduction and give them all a hug, tell them how much they mean, but it's a little anticlimactic because there's a game this weekend, but we still have two more to go through and now that we're postseason eligible, we hopefully have four more games together so it's a steady crescendo but our guys will be alright.

“I remember my first year as a head coach, I had a great player, Joe Thomas, who was the fourth player taken in the draft, still playing, one of the best linemen in the history of the NFL and he was as emotional as I've ever seen any player,” Bielema said. “He was 6-foot-6, he's 330 pounds and I mean, he's crying like a 4-year-old.

“I was a little nervous. He went out and played probably one of the greatest games I've ever seen him play. So it tells me you can turn it on and off pretty quick.”

“We get the opportunity to honor over 20 seniors,” Bielema said. “In my entire coaching career, I haver never been able to have this many that have contributed in so many different ways - offense, defense, special teams. A lot of great stories.

“It is kind of a mixed class with guys that were hear before we arrived, guys that have come since we arrived. Tremendous amount of character and a lot of things they have helped build us to where we are today.”