The history behind the Arkansas-LSU 'Boot' 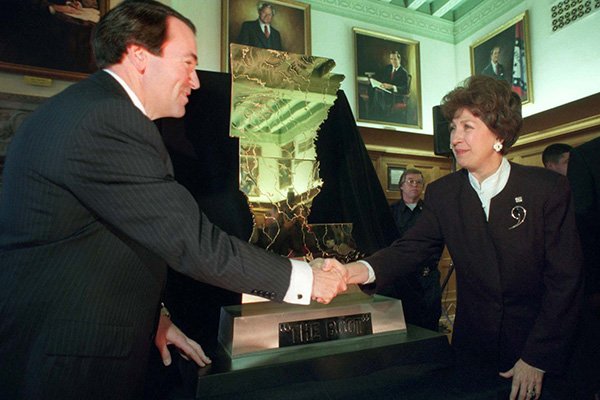 Between them was a 24-karat gold, 175-pound trophy with the geographical outline of their home states. It resembled the shape of a cowboy boot and would be given to the winner of an upcoming game between Arkansas and LSU.

Fittingly, the trophy was dubbed "The Boot" and the series between the Razorbacks and Tigers has been met with excitement almost every year since.

The Boot's origins can be traced to the creation the same year of the Broyles Award, which is presented to the best assistant coach in college football. Frank Broyles, the longtime Razorbacks coach and athletics director, was impressed with the trophy and told its creator, former Arkansas linebacker David Bazzel, to let him know if he had any other ideas that would promote the Razorbacks' football program.

"When I played in the Southwest Conference we didn't have any trophy games and you didn't see a lot of them in the SEC either," said Bazzel, who played at Arkansas from 1981-85. "You just saw them in the Big Ten, but I always thought it would be pretty cool to play for a trophy.

"I started doing a little research and saw where Arkansas and LSU started playing in 1901 and there were some similarities in the programs. (Former Arkansas coach) Hugo Bezdek's speech that caused Arkansas to change its mascot from the Cardinals to the Razorbacks came after an LSU win in 1909 in Memphis. They had the 'Ice Bowl' in 1947 when Y.A. Tittle was at LSU that ended in a 0-0 tie. LSU broke Arkansas' 22-game win streak in 1966 in the Cotton Bowl. Even Mike the Tiger, the LSU mascot, was bought when all the students pitched in 25 cents and bought him from the Little Rock Zoo."

The two biggest draws for Bazzel were that the game was placed on the last weekend of the regular season and both teams had struggled to regain their past glories. LSU won a national championship in 1957 and Arkansas won one in 1964, but the programs had struggled to consistently field good teams after the Razorbacks joined the SEC.

"In my mind, I thought if both programs ever came back, because the fan bases are so passionate, it would be an interesting trophy game," Bazzel said.

Once Bazzel had identified an opponent for a trophy game, he set out to identify a trophy. But The Boot almost never came to fruition. In researching ideas for a trophy, Bazzel nearly settled on a Bowie Knife.

"It would have been fun because there was a Louisiana, Arkansas tie-in with that knife," Bazzel said. "It's sort of hazy now, but there was a Bowie Knife that was created by an Arkansan. Apparently there was some crossover between the two states and there might have even been a murder. As I thought about it, I debated between that or something that was big.

Arkansas and LSU each gave Bazzel $5,000 to create the trophy. He took his concept to a jewelry shop in the Little Rock Heights district, and the work was outsourced to a company in Boston.

The Boot gained some added significance as the programs began to improve in the early 2000s. Between 2001-11, the game served as at least one team's play-in to the SEC Championship Game five times.

Arkansas beat LSU in the only true SEC West championship game in 2002. Matt Jones threw a 31-yard touchdown pass to Decori Birmingham with 9 seconds remaining - a play that became known as "The Miracle on Markham."

Other notable games have included the Tigers' upset win in 2006 to keep the Razorbacks from a perfect SEC record. Arkansas returned the upset the next season with a triple-overtime win over No. 1 LSU.

Arkansas has won the last two games by 17 points. The Razorbacks have never won three straight games against LSU during the trophy era.

"It's one of the most competitive trophy games in the country over the last 10, 15 years," Bazzel said. "I thought it would take 30 years to where the trophy had some meaning. It's a little ahead of schedule because of LSU's rise; winning two national championships has put them at a high level. It's worked out really well."

Bazzel said his favorite memory of the trophy came two years ago wen Arkansas beat LSU to snap a 17-game losing streak in the SEC. Razorbacks coach Bret Bielema allowed Bazzel to speak to the team the day before the game. He told the players, "When that game is over with, if you want to shake hands, that's fine. But once it's done, I want either five of you, 10 of you, 20 of you or all of you to run your ass down there and get that boot."

Nearly all of Arkansas' players sprinted across the field to claim the trophy, which LSU had won four years in a row. The Razorbacks celebrated with the trophy at midfield as fans ran out of the stands, creating a picturesque setting at Razorback Stadium.

"When you see it in those pictures, you can find that darn boot; it's so shiny and big, you can't miss it," Bazzel said. "My theory is if you get a trophy, you want a big trophy.

"I'm not saying it's a rivalry game. Now it may ultimately turn into that and some people may think it is now, but definitely it's a trophy game that has some meaning."

Many would argue the meaning is more significant to Arkansas, which has upset higher-ranked LSU teams several times throughout the years. The Boot is displayed prominently outside the entrance to the Razorbacks' locker room.

"The LSU fans know about The Boot, but they'd rather look at a national championship trophy, I'm sure," Bazzel said. "But the more they see Arkansas carrying that trophy off, the more it enhances the trophy's value. I'm happy the game has become a really fun game every year."