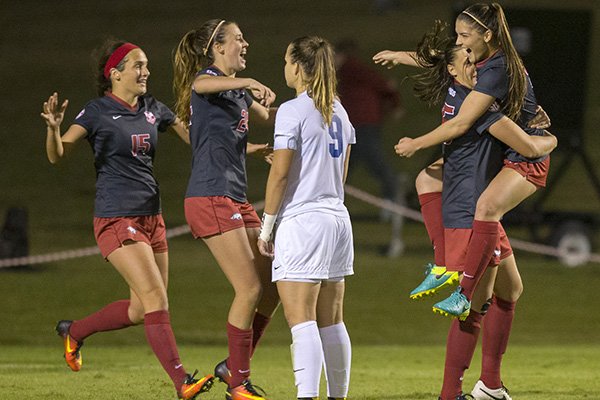 FAYETTEVILLE — Arkansas wasn't ready to see its dream season come to an end in the first round of the NCAA Tournament on Friday.

A pair of upperclassmen stepped up to make sure it didn’t happen.

Jessi Hartzler scored in the 88th minute to tie the game and Lindsey Mayo scored a game-winning header in overtime to give Arkansas a 2-1 comeback win over Memphis in front of 1,458 at Razorback Field. The Razorbacks (18-5) advanced to play either Clemson or Northeastern in the second round next Friday.

"Arkansas is very good on set pieces," Memphis coach Brooks Monoghan said. "I thought we defended the set pieces very well. It's hard to it for 90 minutes. We did for almost 88.

"It was obviously a tough way to lose, but Arkansas did what they're known for. They got us on a couple of set pieces."

Hartzler, a junior, scored off a corner kick by Hannah Neece, which was deflected by Mayo in a scrum in front of the net. Hartzler scored when the ball ricocheted off her chest and past Memphis goalkeeper Maryse Bard-Martel.

Mayo's goal came in the 93rd minute off a free kick by Erika Miller.

"It was a great ball off a free kick," said Mayo, a senior who has a team-high 10 goals. "I was just trying to get something on it to keep it moving. Things worked out. We just try to keep things in play and give ourselves a chance to put everything on goal."

Memphis (14-5-1) nearly retook the lead in the 89th minute. Jessica Lisi got past her defender for a clean look at the goal, but Arkansas goalkeeper Cameron Carter came outside the 6-yard box to make a sliding save. Carter, a senior, had six saves.

"Every big win we've had this year, she's made one big save," Arkansas coach Colby Hale said. "She hadn't made one until then....It was as tremendous save."

Playing without its leading scorer Claire Kelley, the Razorbacks failed to capitalize on several good looks in the first half. Stefani Doyle had a shot go off the crossbar in the first minute, then had another shot deflected over the goal by Bard-Martel in the second minute.

Arkansas outshot Memphis 7-4 in the first half, but the Tigers took a 1-0 lead to halftime after Chanel Hudson-Marks scored on a 43rd-minute header on a cross from Necee Jennings.

Memphis was the aggressor for much of the second half, but Arkansas began to put the pressure on the Tigers' back third in the final 10 minutes, which led to the game-tying goal.

The Razorbacks improved to 3-1 this season in overtime games and 10-1 in games at home. Arkansas was hosting an NCAA Tournament game for the first time.

"We've come from behind in big games," said Hale, who improved to 4-1-1 in NCAA Tournament games at Arkansas. "We've got some leadership and experience, which I thought was the difference in the game tonight."