Inaccurate portrayal: QB Allen not same since hit vs. Auburn 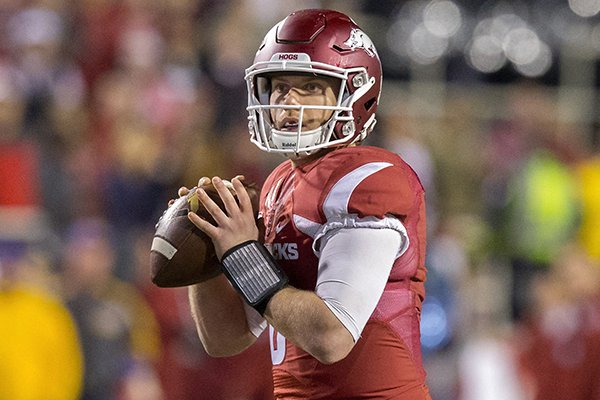 Arkansas quarterback Austin Allen looks to pass during a game against LSU on Saturday, Nov. 12, 2016, in Fayetteville.

Enos suggested this week that Allen might have been starting to drop his eyes when the pass rush was closing in on him last week.

"I think that's what he did a little bit Saturday night," Enos said in reference to Arkansas' 38-10 loss to LSU in which Allen was sacked three times to bring his season total to 24. "We've got to get back to being comfortable, being confident, being poised. That's not just him, that's the whole group."

Allen, who did not go to the Wednesday night media interviews for the first time all season, said Saturday he would have to look in the mirror to find ways to improve.

"I've just got to figure some things out, take a self-inventory, and figure out why I didn't play too well today and try to come out and be better next week," Allen said after the game.

"Austin's had a really good year for us," Lunney said. "A really good year. We're sitting at 6-4, bowl eligible. There's a lot of guys on the team that had a lot to do with that, but none probably had anything more to do with it than Austin, the way he's played for us. Hopefully he'll continue to do that down the stretch."

Said Smith: "I know it's something that he took personally last week that he didn't play like he's capable of playing. He's come out these last two days and he's firing the ball around."

"Coach Herb was telling the group this is the type of guy we've got, and for anyone who has second thoughts or reservations to exit the room," Skipper said.

Allen suffered a sprained right knee on a low dive from behind by Auburn's Carl Lawson four weeks ago. His passing numbers before and after that hit -- which took Allen out for two plays in the second quarter before he exited for good in the fourth -- contrast sharply.

In seven full games plus his pre-injury snaps at Auburn, Allen completed 63.2 percent of his passes and had a 154.16 quarterback efficiency rating, with a 3-to-1 touchdown-to-interception ratio at 18-6. In the two-plus games since the injury, Allen has completed 52 percent of his passes, has a 113.3 efficiency rating and a 1-to-2 touchdown-to-interception ratio at 2-4.

Enos said he doesn't have an answer to what is happening with Allen's accuracy.

"I tried all my psychological ploys Saturday," Enos said. "He just had one of those days, and you've got to give them credit on defense, with the plan they had and the way they executed.

"Nope. I think the thing is you're dealing with a junior quarterback," Bielema said. "It's his first year starting. We had failure as a football team, and he weathered the storm with all of us.

Through 10 games, Allen ranks third in the SEC with 250.1 passing yards per game, 20 touchdown passes and 13.52 yards per completion, and he's fourth with 60.5 percent completions and an efficiency rating of 144.1.

"Man, he's a leader," tailback Rawleigh Williams said. "He bounces back from everything. He's one of the positive voices on our offense, on our team, and he's pushed us to be better and it's on us as well. It's on the O-line. It's on the receivers. It's on the running backs. We have to protect him, and we have to make plays for him."

With three new starters on the offensive line working with first-year position coach Kurt Anderson -- and none of the five starting at the same position as he did in 2015; a new in-line tight end starter in Jeremy Sprinkle; new primary tailbacks in Williams and Devwah Whaley; mostly new fullbacks in Hayden Johnson and Kendrick Jackson; and Allen in his first year as a starter, the pass protection has been patchy all season.

The coaching staff has pointed out the distribution of sack responsibility can be passed around to all those groups, including Allen, who has held onto the ball too long on a few occasions.

But the bottom line is Allen has absorbed 24 sacks, including 14 in the Razorbacks' losses to Texas A&M, Alabama, Auburn and LSU, and he's been hit many other times. Perhaps the cumulative effect, paired with the knee injury he suffered Oct. 22, is taking its toll.

"His mechanics have been good," Enos said. "There are some things we need to fix within his drops, but as far as throwing the ball mechanically and everything, he's fine. It's eye discipline and footwork that are the issues that get him into trouble.

"Some of the plays earlier in the season when he had issues, we worked with those, but they were very few and far between. They've become more prevalent, at least last week they did. We've got to do a better job of protecting him and then he's got to do a better job, when he does have protection, of going through our progression quickly."