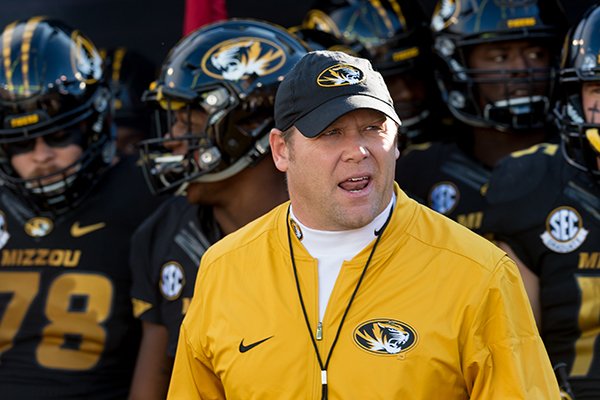 Missouri head coach Barry Odom walks on the field prior to the start of an NCAA college football game against Vanderbilt Saturday, Nov. 12, 2016, in Columbia, Mo. (AP Photo/L.G. Patterson)

FAYETTEVILLE -- When Arkansas last played at Missouri in 2014, the Tigers won 21-14 to clinch their second consecutive SEC East championship.

Gary Pinkel, who had a 118-73 record in 15 seasons as Missouri's coach, stepped down after last season to focus on his treatment for non-Hodgkin's lymphoma, a form of cancer which affects the immune system.

Bielema was promoted from defensive coordinator to head coach at Wisconsin in 2006.

"I'm always pulling for guys within, you know, being that's how I got my start," Bielema said.

Bielema went 12-1 at Wisconsin in his first year. He inherited a different situation than Odom, but the Badgers were picked to finish in the middle of the Big Ten after going 10-3 in 2005.

"Sometimes it can be some unforeseen things," Bielema said of what results in a tough season. "It can be an injury here or there, a recruiting decision here or there in critical spots.

"You look at teams that were in the national spotlight last year and this year are struggling to make bowl games. It's college football. It's parity. It's everything."

Lack of experience has been a big issue for Missouri due to defections. There have been 27 players make their first starts this season and the two-deep lists nine seniors.

On Friday, the Razorbacks are taking on a Missouri team guaranteed to finish last in the East for the second consecutive season.

The Tigers' roster took another hit this week when Odom announced tailback Damarea Crockett -- a freshman from Little Rock who has rushed for 1,062 yards and 10 touchdowns -- is suspended for Friday's game after he was arrested Sunday for misdemeanor marijuana possession.

"There's a lot of great things going on," Odom said Monday. "A few of those get recognized and some don't. But I know we're better today than we were this time last week. ... We've gotten better. The wins haven't followed that. They're going to.

"I know that the foundation that we're continuing to build, we're talking about personal accountability, social responsibility and putting the team first. When I can get 120 guys doing that every day with every decision that we make, then this program is going to take back off."

Sophomore quarterback Drew Lock has passed for 3,131 yards and 22 touchdowns this season. Junior Ish Witter, who will take over the lead tailback duties for Crockett, has rushed for 738 yards.

"Offensively, they're really getting into a groove here," Odom said. "I'm excited about their progress, no question."

Junior defensive end Charles Harris, who has 18 career sacks, has to decide whether to enter the NFL Draft or return for his senior season.

"They've always got good defensive linemen, ends that I know the NFL is waiting to get their hands on," Bielema said. "They play very passionate."

Bielema, who went 3-9 in his first season at Arkansas, was asked if he can empathize with what Odom is going through.

"I'll empathize with him after the game," Bielema said. "I respect him. I think he's a really good football mind."

Bielema was in Columbia, Mo., last December for a recruiting visit to Hayden Johnson -- Arkansas' freshman fullback -- when he ran into Pinkel at a coffee shop.

It turned out to be the same day Odom was named Pinkel's replacement. There's video of the Tigers mobbing Odom when he was introduced as their new coach.

"I popped into a Starbucks to get me a little eggnog latte and I looked to my left and Pinkel was standing right there," Bielema said. "I remember just having a conversation with him and he was hoping Barry was going to get it.

"Then about five or six hours later they announced it. You saw the players react. I think that's the part that you can't put a price tag on."

Bielema said it's obvious the players have respect for Odom.

"They don't have to love you or think you're their best buddy, but if they respect you, you've got a chance to move forward," Bielema said. "I know Barry has got that feeling with his players.

"You can see it in when we'll go against them in recruiting. So my guess is this blip will be short."