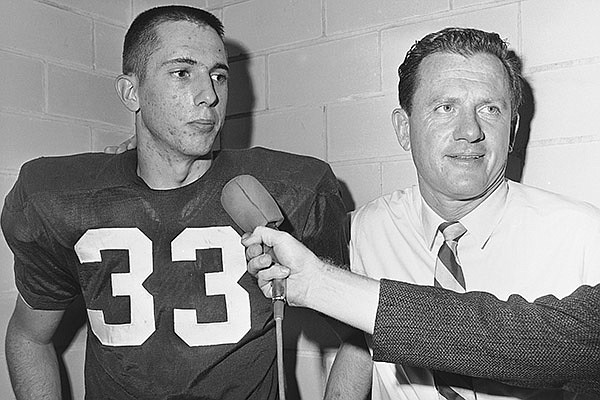 Bobby Burnett, left, University of Arkansas tailback who scored the winning touchdown in the fourth period of the Cotton Bowl game, and his coach Frank Broyles are a happy pair as they chat in the locker room after the game. Arkansas defeated Univ. Nebraska 10-7 in the Cotton Bowl at Dallas, Texas, January 1, 1965. (AP Photo/Ted Powers)

FAYETTEVILLE — Bobby Burnett scored arguably the most significant touchdown ever for the Arkansas football team.

The touchdown run capped an 80-yard drive for the Razorbacks after Nebraska had taken a 7-3 lead.

"It was on an option play," Arkansas quarterback Fred Marshall said. "I took the ball and sprinted to the right, and then I flipped it back to Bobby and he went airborne and just got over all the defensive guys there.

"He only touched the ball the one time on the drive, but it was an important one time."

Burnett, who lived in Castle Rock, Colo., died Saturday in a hospital in Marion, Ill., at 73 from pancreatic cancer. He had been traveling from Michigan to Georgia to visit his children and grandchildren, said Tommy Burnett, Bobby's younger brother.

Arkansas' Cotton Bowl victory allowed the Razorbacks to share the 1964 national championship with Alabama, which was awarded the title by The Associated Press and United Press International polls before losing to Texas in the Orange Bowl to finish 10-1.

The Football Writers Association of America and Helms Foundation named Arkansas the No. 1 team in the country after the bowls.

"Bobby was one heck of a running back for us," Marshall said. "He was a man playing a boy's game."

After Burnett was taken by the Buffalo Bills in the fourth round of the 1966 American Football League Draft, he became the AFL Rookie of Year when he rushed 187 times for 766 yards and caught 34 passes for 319 yards.

Burnett led Arkansas in rushing touchdowns as a junior and senior with eight in 1964 and 16 in 1965 when the Razorbacks were a combined 21-1.

"Inside the 10-yard line, he was just unstoppable," said Tommy Burnett, who played receiver for the Razorbacks in 1965-66. "If he didn't think he could get through a crease, he's just go up and over."

Jim Williams, a defensive tackle for the Razorbacks in 1964-65, said that before the 1964 season Bobby Burnett used to be plagued by fumbles and injuries in practice.

"Nobody thought Bobby could play tailback for us, because he would always fumble or get hurt," Williams said. "But the coaches had the savvy to put him in there and to teach him better and he turned out to be the best thing that happened to us in the backfield, especially at tailback.

"After he started playing, he made everything work. He never got hurt and he never fumbled."

Burnett combined for 368 carries and receptions in 1964-65 without a fumble.

"Bobby was a miracle man as far as I was concerned," Williams said. "He became an absolute supreme tailback for us.

"When we got down to the goal line, you knew the ball wasn't going to anybody but Burnett. He was Mr. Consistency.

"Bobby was also a great gentleman and friend. We're sorry to lose him."

"He was a winner and a team player and a leader for the Razorbacks," Broyles said Sunday. "He did everything he was supposed to do and took pride in it."

Burnett played in only 11 games as a professional after his rookie season with the Bills because of a knee injury he suffered in 1967. He missed the 1968 season recovering, then played briefly for the Denver Broncos in 1969 before retiring.

Burnett stayed in the Denver area and eventually became an executive for a real estate company.

"I saw Bobby do things in the real estate business that are virtually unheard of," said Tommy Burnett, who lives in Springfield, Mo. "I was visiting him one time when he tore up a contract for a couple that thought they'd gotten in over their head with the house they'd bought.

"It was a pretty expensive house with a nice commission and Bobby asked them what he could do to help. They felt they'd overspent and he reached into his desk drawer and pulled out the contract and tore it in half.

"He said, 'Go home and think about it and if you want to get another house, let me know and we'll help you.'

"I said, 'Boy, you just cost yourself a lot of money.' He said, 'You've got to be honest with people. They made a mistake, and I had the ability to correct it.'"

Bobby Burnett's youngest brother, Bill, also played running back for the Razorbacks and as a senior in 1969 rushed for 20 touchdowns, a school record that stood for 46 years.

"Bobby was a great all-round athlete, but the one word describing him is 'perseverance,'" said Bill Burnett, who lives in Fayetteville. "You talk about a guy hanging in there. He had been redshirted and didn’t start until three-quarters of the way through his junior year."

Tommy Burnett was playing for the New York Jets when Bobby Burnett injured his knee against the Jets in 1967 while running a sweep and being tackled by cornerback Johnny Sample.

"Sample dove between the guards and hit Bobby's knee and it tore everything up," Tommy Burnett said. "It was sickening to watch it on a replay.

"Bobby said many times, 'I just never could turn it on like I could before that happened.'"

Tommy Burnett said he visited his brother in Colorado a few weeks ago after he had been diagnosed with cancer.

"We had a lot of laughs and good times telling stories," Tommy Burnett said. "He was a neat guy with a great laugh. He had an adult man giggle.

"We had a lot of fun, but we pretty much knew that was it for us. We weren't going to get to see each other again."