Frank Ragnow in Minnesota after death of his father 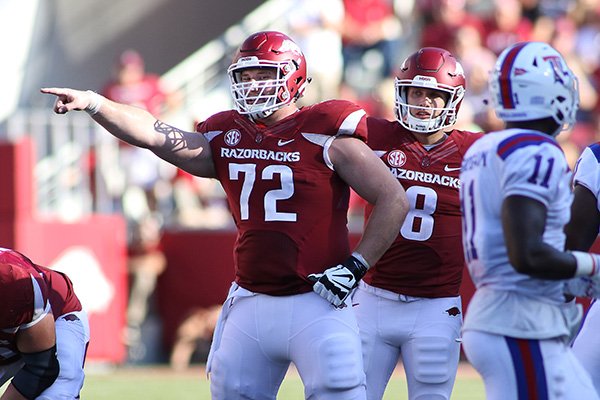 Arkansas' Frank Ragnow (72) yells out to his teammates before getting set during the fourth quarter of an NCAA college football game against Louisiana Tech Saturday, Sept. 3, 2016 in Fayetteville, Ark. Arkansas beat Louisiana Tech, 21-20. (AP Photo/Samantha Baker)

Bielema said he and his wife, Jen, flew home with Ragnow on Saturday and returned home early Sunday. He said it was the third time in his coaching career he has taken such a flight.

Ragnow is expected to play in the Razorbacks' game against No. 1 Alabama on Saturday.

"I don't know exactly where it will lay out for the week," Bielema said. "He'll give us information as they go.

"I think he'll be back with us later in the week. He made that comment to me Saturday night as we sat in the basement of the facility, that he wanted to play."

Bielema said Zach Rogers will practice with the first-team offense in Ragnow's absence.