State of the Hogs: Alabama has new spin on old success 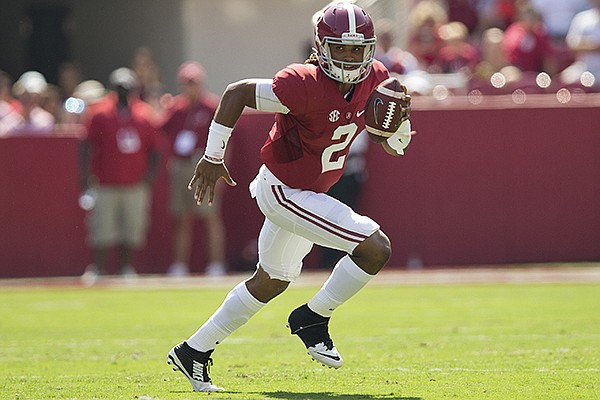 FAYETTEVILLE — It's not your grandfather's Alabama that comes to the Ozarks this week.

The change is that Saban, the Alabama head coach, has adapted some spread schemes to what has traditionally been a pounding rushing game with a heavy dose of pro passing. The Crimson Tide now features a running quarterback in freshman Jalen Hurts.

Arkansas coach Bret Bielema said Saban still “wants to run the football,” but notes that it's no longer strictly out of a pro-style system as in the past. Alabama and Arkansas were two of the few teams around the SEC running a pro offense.

“They don't look like that now,” Bielema said. “Alabama is now in the spread market.”

There will still be some looks with two tight ends and some with two backs with a quarterback. That's the way Arkansas plays. Against those formations, three linebackers are needed in fronts with seven or eight men in the box.

“There is still a role for our base (defense) in this game,” Bielema said. “They will run traditional looks, but also get in the spread. You have to prepare for everything.”

Of course, Hurts is a quick, nimble runner. He can also break tackles. There are called quarterback runs and scrambles when he sees openings against man-to-man defenses. It's been poison for the Arkansas defense.

The Hogs have given up big plays against running quarterbacks in several games this year, including their lone loss. Texas A&M quarterback Trevor Knight ran for 157 yards on 10 carries, including three long plays. Even Alcorn State quarterback Noah Johnson had a 53-yard ramble and also scored on a 12-yard keeper.

“We are trying to sucker those guys in,” Smith quipped. “Certainly, we are going to try to get better against the quarterback run. We have some new wrinkles for them this week to shut it down.”

The spread concepts weren't in the Razorbacks' summer projections for Alabama, but Smith said there are still some similar looks that held true in early plans.

“They have a spread identity,” Smith said. “They are in three wide receiver sets 60 percent of the time on first and second down. But 40 percent they have one or two tight ends. And they bring in personnel and misplace them. They put tight ends at wide receiver and wide receivers at tight end.

“So you have to be careful with your personnel. You have to recognize those and match them. It's a different style.

“You think about some of the things Alabama does, still the best practice we can have for them is for what we do against our own offense. They give us our best look for Alabama.”

Defensively, not much has changed with the Tide. Dan Enos, the Arkansas offensive coordinator, sees the same style and if the players are slightly different in some spots, they are as good. He said it's a case of high draft picks scattered throughout the Tide defense, just like in the past.

“They are extremely talented, extremely well-coached,” Enos said. “The formula you see is that they are really good up front and they have no weaknesses. You break them down, they find ways to attack your weaknesses. They have good tacklers.”

“Tim Williams is like the guys at Texas A&M - extremely explosive with a great first step,” Enos said. “But it's not just one guy. They have powerful guys who are big challenges.”

The Hogs sputtered to move the ball against Alabama last year, like in many seasons. Still, the Razorbacks led 7-3 late in the third quarter before eventually falling 27-14.

“When you go back and look at that, some of the things were us,” Enos said. “You look at some things schematically. There are certain plays that don't have a chance structurally.”

The Tide's rush and blitzes often overwhelm drop-back passing schemes. Does that mean a turn to more of a quick pass game?

“You have to keep them off balance,” Enos said. “You can't go in and say you don't drop back.”

It's not just the rush. Alabama's physical play at corner with Marlon Humphrey (196 pounds) and Minkah Fitzpatrick (203) can make it tough for wide receivers to get open on quick routes.

“They challenge the wide receivers at the line of scrimmage more than anyone in our league,” Enos said.

Keon Hatcher might be the most physical Arkansas wide receiver. He missed last week with a hamstring injury. His availability is not clear this week. He missed last year's game at Alabama with a broken foot.

“Keon can be huge this week,” Enos said. “We didn't have him last year. He's big and physical and that's what we need against these corners.”

Enos said wide receiver separation is as important as protections.

“It has to be all areas, protection with more than just the five offensive linemen,” Enos said. “The receivers have to get their release and get down the field, and our line has got to get better.”

The Hogs have struggled in short yardage situations the last two weeks. They were pushed back over and over from close range on the goal line against Texas A&M. They failed on a fourth-and-1 near midfield in the second quarter against Alcorn State.

“We saw a different look (against Alcorn) that we have to check out of,” Bielema said. “You can't force a square peg into a round hole.”

Protection has to be creative against the Tide, Bielema said. It may include lots of help from wide receivers and tight ends, like the Hogs used against A&M.

“They have gifted players,” Bielema said about the Tide. “We hit those D-ends at A&M every way imaginable. We'll have to do some of that again. What I do know is that we'll have to chip them, cut them, double them and just whack them lots of ways. I do know that people pay attention when you are into their feet.

“They haver really good players and what they have as far as depth in the defensive line is unprecedented.”

It won't take super human effort, though. Bielema said success against Alabama will still come down to consistent play.

“I talked to our team Saturday and again yesterday, what I've learned the most is that you don't need to try to be extraordinary,” he said. “If you just do your job, it's enough. Trying to press and do more causes you to miss your assignment.”

The key is to tackle Hurts. He blistered Ole Miss with 146 yards on 18 carries.

“He's a very strong runner,” Smith said. “He's very fluid. He's going faster than he looks. He's elusive, has strength and knows what he wants to do.”

Hurts has passed for 989 yards, completing 62 percent. He passed for 262 yards before giving way to backup Cooper Bateman in the final minutes last week against Kentucky on Saturday.

It's to the point that the young quarterback can beat you with his arm or his feet. It could be that it's not the time to try to sucker in anyone and Smith knows it.