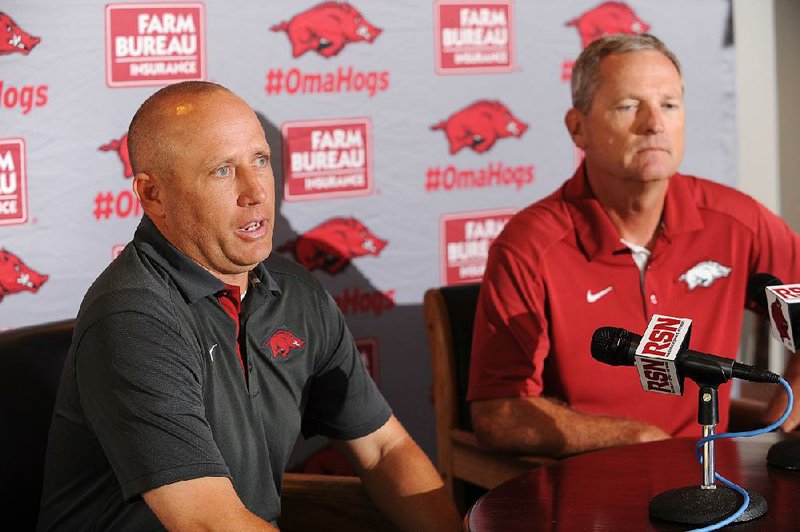 “I love Coach Johnson,” said Hill, who's a right-hander and has hit 90-plus mph on the radar gun. “Coach Johnson is one of the best dudes to talk to in the world. Whenever you’re feeling down, talk to Coach Johnson. I love that dude.”

Hill, 6-3, 200 pounds, has scholarship offers from Arkansas, Oklahoma, Kentucky and Missouri in baseball and Louisiana Tech, Missouri, Arkansas State and Louisiana-Monroe as a quarterback.

He said Johnson energizes him.

“When he calls, you can just feel the energy through the phone, and I can just tell by talking to him he knows a lot of information,” Hill said. “He’s developed tons of guys … and I just love him overall.”

He completed 12 of 15 pass for 270 yards, 3 touchdowns and had 2 rushing touchdowns in Friday’s 47-3 victory over Bauxite. He will have a tough decision in the future on whether to play college football or baseball.

“I just want to it play out and go through my high school career and just let it pick me,” he said. “I’m just going to go through and see which one is the better opportunity for me. My family and I will talk about it, and I’ll make a decision maybe sometime in the summer and find out what I want to do.”

Hill has thoughts of trying to play both sports but knows it would be very difficult.

“I have considered playing both because I love both, but at the same time it’s kind of different from high school,” Hill said. “You have to train harder, and I think I’m going to keep it with one sport whenever I go to college.”

“You saw him run tonight; you saw him throw tonight,” said Richardson of Hill’s performance against Bauxite. “He’s a 3.7 GPA.”