No. 11 Razorbacks blank Vanderbilt, set up showdown with South Carolina 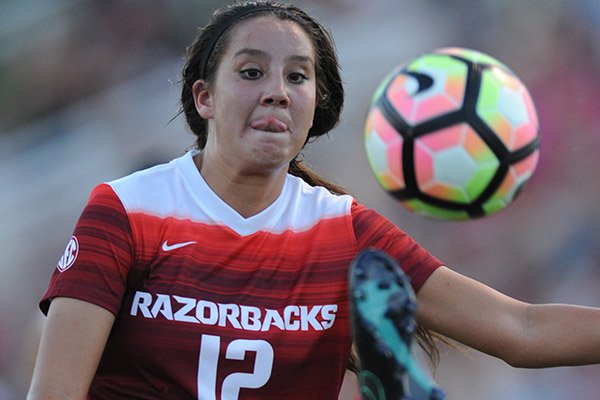 Arkansas' Claire Kelley redirects the ball against Vanderbilt Thursday, Oct. 6, 2016, during the first half of play at Razorback Field in Fayetteville.

FAYETTEVILLE — Arkansas’ trend of considerably outshooting its opponents continued Thursday in a 4-0 win over Vanderbilt at Razorback Field.

The Commodores, who entered the match winners of four consecutive in conference, did not record a single shot in the first half. No. 11 Arkansas outshot Vanderbilt 11-0 and 8-0 in shots on goal in the opening 45 minutes.

Those chances led to the Razorbacks taking a 2-0 lead into halftime and collecting their third shutout win of the season.

“We came out ready to play,” Arkansas coach Colby Hale said. “I’ve told this team the consistency piece is important. [Vanderbilt was] an 8-4, 4-1 SEC team, and we just came out extremely well and put a lot of pressure on them. I thought we punished them for it.”

Lindsey Mayo put Arkansas (13-1, 6-0 SEC) on the board in the 33rd minute with her sixth goal of the season, and senior Claire Kelley tacked on another with a header just more than two minutes before halftime.

The Razorbacks then padded their lead early in the second half, effectively putting the match out of reach when Kelley knocked home her second goal of the night. She also assisted on Mayo’s first-half goal. Hale said there was never a sign of his team overlooking the Commodores with No. 4 South Carolina looming Sunday, and it played like it.

“They know everyone in the SEC is good,” Hale said. “There are no off days, and I don’t even think that was on their minds. This is huge because it’s the next one. Do wins over Florida and Duke impress you? Yes, but 13-1 impresses me because that tells me the game after we played well. This team’s preparation has been tremendous.”

Jessi Hartzler then set the final score in the 63rd minute, dribbling into the box following a deflection for her sixth goal of the year. It capped Arkansas’ school record eighth consecutive win at home.

“You just kind of have to go out and do your job and be in the right place at the right time,” Kelley said of the win. “We knew if we were able to get some shots on frame the keeper would have a hard time, and we finished them. Our defense was phenomenal.

“We’ve been clicking well this year, better than we have in the past.”

The Razorbacks outshot Vanderbilt 22-7 and 17-4 in shots on goal. Arkansas was the aggressor Thursday, and will need more of that Sunday when it travels to face the Gamecocks.

No player on the Arkansas roster has beaten South Carolina, Kelley said. The teams tied, 2-2, in last season’s matchup.

Like the Razorbacks, the Gamecocks are undefeated in conference. Kickoff in Columbia, S.C. is set for 1 p.m. Sunday and can be seen on SEC Network+.