Power the focus for Arkansas pitchers 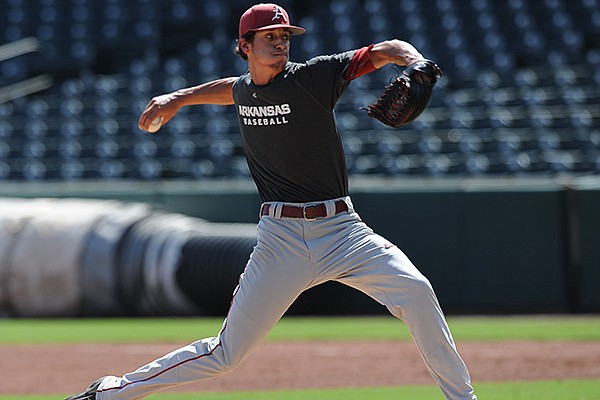 FAYETTEVILLE — When Dave Jorn stepped down as Arkansas' pitching coach earlier this year, he made a prediction for 2017.

Fast-forward a few months and many of those pitchers are performing just how Jorn said they would. Right-handers Blaine Knight, Isaiah Campbell and Barrett Loseke are among those who have all shown substantial growth since their freshman season ended, especially in their strength and their power.

Knight and Campbell are tied for the team's fastest velocity this fall. Along with junior college transfer Trevor Stephan, they have recorded 97 mph on their fastball.

The results were as promised by Jorn's successor Wes Johnson, who said at his introductory press conference that he wants to develop power pitchers. That's how he made a name for himself in past stops at Dallas Baptist and Mississippi State, where last season he revamped a Bulldogs pitching staff into a top 10 unit nationally.

"Coach Johnson is all about power," said Campbell, who was a summer all-star in the California Collegiate League. "He loves velocity. Coach Jorn was more about commanding your fastball on both sides of the plate. Coach Johnson wants you to do that, too, but he cares about power pitching; power curveball, power changeup - everything is power with him."

Johnson develops more arm power by focusing on lower-body strength. The Razorbacks reconstructed their old indoor batting cages into a pitching performance center in Jorn's final year, and Johnson has enhanced it with the addition of sleds, treadmills and other tools designed to strengthen his pitchers' core and legs.

"We're doing lunges and sleds, so it's a lot different than just doing squats in the weight room," said Loseke, who was a summer all-star in the Coastal Plains League. "These are pitcher-specific workouts."

It's a much different workout than in years past when Jorn focused more on running to build endurance and mental toughness. Because of the running, some players say they had a tough time keeping up their weight, which affected their stamina late in the season.

"I feel like weight is such a big part to keeping up your velocity," said Knight, who has gained 12 pounds this off-season. "I feel like that kind of got us toward the end of last season; I know it's what got me. My body was just drained. I just couldn't go deep into games."

Adjusting to the new lower-body workout was tough on some players.

"Sometimes the sleds were 15 or 20 pounds heavier than me and Blaine," said Loseke, who is 170 pounds.

Knight, who was 156 pounds before the workouts began, said he struggled most with the sled. He said it was obvious which players had a football background by the ones who powered through the sleds.

"I wasn't in as good of shape as I thought I was, so the sleds got me the first day pretty good," Knight said. "You push it about 35, 40 yards, sprinting down and back. You can kind of see the lineman coming back into some of these guys like Isaiah. You can tell a difference in the guys who have experienced that before."

But the added strength only accounts for a percentage of the pitchers' arsenals. Each had work to do on mechanics in the offseason and on game day preparation. 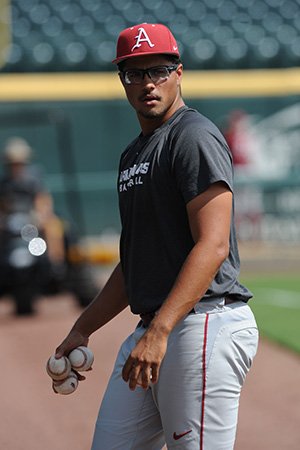 Loseke was strong the first time through the order last season, but typically began to wear down around the fourth inning. What appeared to be the opposing batters learning his tendencies was actually Loseke giving out from bad eating habits.

Before his starts, Loseke would sometimes only drink a protein shake. Before a start against Missouri he ate chili and ham, which he says was a mistake he'll only make once.

"It's freshman year and you're getting used to everything, so I didn't have a particular plan to be physically ready," Loseke said. "Sometimes I wouldn't eat enough food on the day I pitched and I would be exhausted because I didn't have any fuel.

"Last year I just didn't have a good approach on starting and I didn't get food in my body. When I was starting, I would get nervous and couldn't eat. It's tough to shove eggs and potatoes down before you start. When I came out of the bullpen, I didn't know I would pitch that day, so it was more of a routine before every game. I wasn't hungry and my body was in good shape."

There is also a focus on pitching psychology. Loseke said Johnson has pitchers read different online theories about pitching.

Knight, Campbell and Loseke all figure to play a key role in the Razorbacks' bullpen next year. Loseke was the team's Sunday starter in some conference games last season, but has worked more out of the bullpen this fall. Knight and Campbell have worked as starters, as has junior right-hander Keaton McKinney.

Senior right-hander Dominic Taccolini has worked as both a starter and closer. There is belief that he or Knight will be the team's closer next season.

"No role is really set right now, so we're all working to see what our role could be," Knight said.

The Razorbacks' staff wants to erase the bad taste left in their mouths from a bad season in 2016. Arkansas had the league's highest team ERA, including a 6.07 ERA in SEC games.

"You look at the history of this program and they've always had good pitching with people like Dallas Keuchel, Drew Smyly, Ryne Stanek and Cliff Lee," Campbell said. "After last year we definitely have a chip on our shoulder to prove this program is as good as it's always been."

"All of the returners have a pretty good chip on our shoulders because we think we had a much better team that could have gone further than we did," Knight said. "We were way better than that and I think you're going to see a much better staff than you saw last year."

One thing is for sure: Arkansas' pitchers will be stronger.