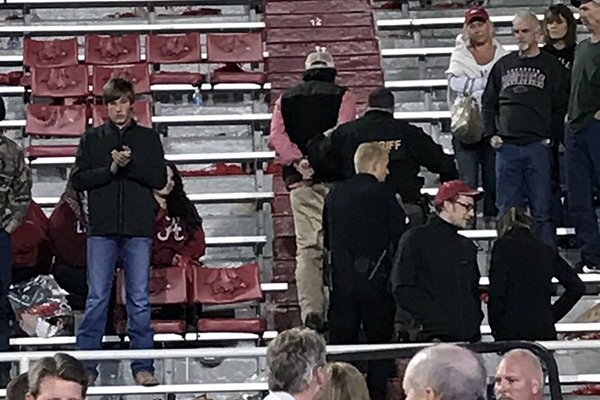 A fan is escorted by police out of Razorback Stadium following Arkansas' loss to Alabama on Saturday, Oct. 8, 2016, in Fayetteville.

FAYETTEVILLE — The University of Arkansas professor arrested for his profanity laden tirade at Bret Bielema after the Alabama loss Saturday publicly apologized for his actions Monday and is still employed by the school.

Lawton Lanier Nalley, 37, an assistant professor of agricultural economics and agribusiness was arrested on charges of disorderly conduct and public intoxication after confronting Bielema as the Razorbacks head coach waited for his players to enter the Broyles Center following the Razorbacks’ 49-30 loss. Nalley was booked and released Saturday night.

He released the following statement through the university Monday evening:

“I embarrassed myself, the college and the university. I hold myself to higher standards and have no excuses for my actions. I especially want to apologize to Coach (Bret) Bielema.”

“We have reviewed this situation and are very disappointed by Dr. Nalley's actions, which were highly inappropriate. Dr. Nalley is remorseful for what occurred. He is respected for his teaching and research, and has been an asset to the Department of Agricultural Economics and Agribusiness, and the college.

“Taking all this into consideration, we are moving forward with appropriate measures to address the matter with Dr. Nalley, who remains employed by the University.”

Bielema joked about the situation at his Monday afternoon press conference. The confrontation turned into national news by Sunday.

“I get a lot yelled at me,” Bielema said. “I was halfway impressed he said my name correctly. He had to be somewhat in the loop. If it’s By-leany I usually don’t turn around — or bulimic.

“But I do a lot of stuff on campus every year. I think he’s in the ag school. I’ve done a couple talks over there. I guess I probably won’t be invited to speak in his classroom.”