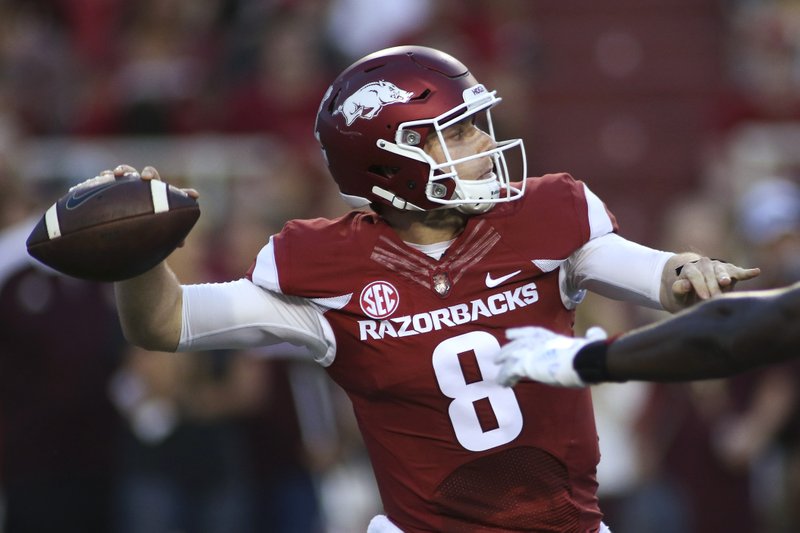 FAYETTEVILLE — Bret Bielema made it a point to swing by the quarterback meeting room and check on his star signal caller Sunday afternoon before offensive coordinator Dan Enos arrived to lead a film session.

Austin Allen was in the process of making a cup of coffee when Bielema arrived, a development that didn't surprise the Arkansas head coach one bit.

“He’s the only 21-year-old I know who drinks coffee like him,” Bielema said.

Bielema had a simple, obvious question for his 6-foot-1, 209-pound junior quarterback.

“How you doing my friend?” Bielema said, recounting the conversation Monday.

“I feel great,” was Allen’s response.

Allen went on to say he felt the same as he did a week earlier, a day after he wasn’t sacked or hit in a blowout win over Alcorn State.

It wasn’t the expected answer for a player sacked six times and knocked down more than 20 in the 49-30 loss to No. 1 Alabama. But it was an encouraging one for the Razorbacks heading into a home game with No. 12 Ole Miss, a matchup that features arguably the top two quarterbacks in the SEC in Allen and Ole Miss senior Chad Kelly.

The duo ranks first (Kelly, 163.18) and second (Allen, 158.07) in the SEC in quarterback rating. Allen’s 1,632 yards rank second, while his 15 touchdown passes are first. Kelly’s 1,596 yards rank third, he has a solid 13:4 touchdown-interception ratio and his 9.2 yards per attempt lead the conference for players with more than 40 attempts.

“He's a playmaker. He's a great quarterback, great arm and he makes plays for them,” Allen said.

Kelly is prone to make mistakes at times and has a gunslinger mentality, but his ability, specifically his arm strength, landed him squarely on the NFL Draft radar entering the season after a big junior year. ESPN’s Mel Kiper ranked him the No. 1 senior quarterback in the nation, while Todd McShay slotted him No. 5. NFLDraftScout.com and CBS rate Kelly an early second-rounder and the No. 5 quarterback in the class.

Allen appears to be on a similar trajectory and has perhaps even surpassed Kelly. ProFootballFocus.com, an in-depth scouting service, ranked Allen the No. 6 quarterback in the nation, any class, through four weeks, while putting Kelly No. 9.

Since, Allen turned the ball over four times, including three interceptions, against Alabama. But he also threw for 400 yards and three scores. When the ranking came out, Allen had been pressured on 40 percent of his dropbacks, the second-highest rate in the nation. Pro Football Focus charted 42 pressures on 61 dropbacks — a stunning 68.9 percent — against the Crimson Tide, pressure that prompted him to throw off his back foot on several of the interceptions.

But Allen has taken a beaten and not only kept getting up, but kept making big throws, throws that have turned heads for defensive coordinators around the league.

“There are some that actually think he’s more talented than his brother (Brandon),” said ESPN’s Joe Tessitore, who has called four Razorback games this year. “I don’t think Austin, Bobby (Allen) or the staff would say that, but other defensive coordinators I’ve heard (have). They all rave about his presence on the field. His guts, his command. His leadership.

“And then you’ll hear some of them talk about his pure arm talent, saying the kid has legitimate cross-field and downfield arm talent.”

So does Kelly. That’s what makes Saturday’s matchup so exciting.

Allen will presumably make himself a cup of coffee early on game day and later get a chance to prove he’s the top quarterback in the SEC.