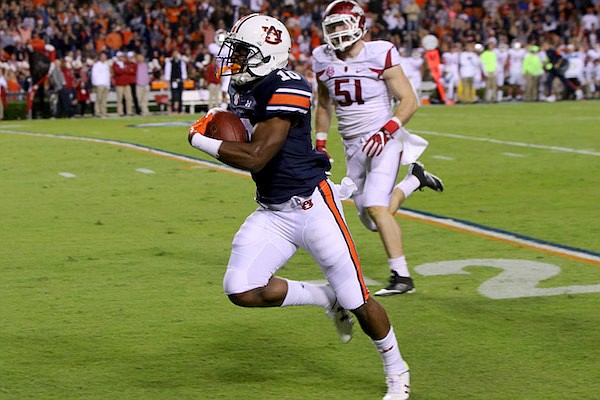 Auburn's Stanton Truitt scores his teams 4th td over Arkansas' during the first second of their game Saturday at Jordan-Hare Stadium in Auburn, Ala.

The worst run defense in the SEC hit a new low Saturday. The worst run-defense performance in school history, in fact.

Auburn, featuring the SEC’s top running offense, ran for 268 yards while averaging 12.2 yards per carry in the first half, bettering what No. 1 Alabama did in its dominating performance two weeks ago when the Crimson Tide rolled to 214 yards and 10.2 yards per carry.

Arkansas’ defense got better in the second half against Alabama. It didn’t Saturday at Jordan-Hare Stadium. The Tigers finished with 543 rushing yards and averaged an eye-popping 9.5 yards per carry.

Like the Alabama game, Arkansas struggled stop the run outside the tackles, which allowed the Tigers to gash the defense for big gains. Too often, corners failed to set the edges and linebackers were stuck inside, either too slow to react and fit outside gaps, suckered in by false steps or effectively walled off by solid blocking. (Much, much more on that in the final observation).

Here, defensive end Tevin Beanum crashes inside, weakside linebacker comes too far upfield to recover and make a play on the back and middle linebacker Brooks Ellis can’t get off a block and safety Santos Ramirez fails to come downhill and then doesn’t take a proper angle to prevent the touchdown.


The defensive line was pushed around. The safety issues, detailed below, didn’t help matters, with 6-yard runs turning into much longer, chunk gains several times.

Even Sean White, not a runner by any means, got in on the fun, breaking this 41-yard run on a read option play as defensive end Karl Roesler crashed inside and Eugene was sucked inside.


The Razorbacks gave up 14 runs of 10 or more yards, seven of 20 or more and three of 40 or more, continuing a trend that has followed them against opponents with good ground games.

Arkansas’ defense has yielded big plays with shocking frequency this year, the prevailing reason the unit has been a disappointment after returning nine starters. The Hogs gave up four plays of 20-plus yards in the Ole Miss win, tying the season-low against FBS competition. Saturday, Arkansas allowed eight plays of 20 yards or longer, five of 30 or more, four of 40-plus and two of at least 50.

Arkansas is now allowing an average of 221.8 yards per game and 6.4 yards per carry this year, chilling numbers for a team with a defensive line that was supposed to be a strength entering the season.

Josh Liddell and especially Santos Ramirez appeared to turn a corner in the Hogs’ 34-30 win over Ole Miss after some early-season struggles. If the win over the Rebels was a step forward for the safety duo, Saturday had to be two steps back.

Each missed a number of tackles, failing to wrap up on some and going for big hits on others.


Against Ole Miss, Ramirez’ late big hit didn’t connect squarely with Chad Kelly but forced the fumble that allowed the Razorbacks to secure the win. Against Auburn, whiffed big hits turned into extra yardage for the Tigers.

Auburn didn’t have to throw often, but it was able to take advantage of Ramirez for a big play in one key instance when it did. The sophomore left a wheel route uncovered late in the second quarter, gifting Tigers quarterback Sean White a 45-yard touchdown to extend the lead to 28-0.


The Tigers’ final touchdown, a 51-yard run late in the fourth quarter, came as Ramirez collided with nickelback Henre’ Toliver, giving up the edge and essentially gifting the sideline to Auburn.

The above touchdown pass was set up by Auburn’s motion, a regular theme for Tiger big plays in the first half. All too often, Arkansas didn’t react to motion and formationing, allowing Auburn to take advantage and get athletes in space for long gains.

Receiver Eli Stove scored a 78-yard touchdown on a jet sweep on the first snap of the game. Arkansas didn’t react to the motion at all, with linebackers Eugene and Ellis sucked inside, leaving Ramirez and cornerback Jared Collins in space as the only defenders with a shot at stopping Stove. Neither did and Auburn quickly gained momentum.

Austin Allen had been hit and knocked down multiple times even before Carl Lawson went low and injured Allen’s knee just after the junior quarterback released a pass in the second quarter.

First drive of the game, left tackle Brian Wallace beaten off the edge by Auburn stud defensive end Carl Lawson for a sack.


Right guard Jake Raulerson was at times driven yards into the backfield. He was outweighed and overmatched against Tigers defensive end Montravius Adams and other Tigers several times.

Right tackle Brian Wallace tries to fan defensive end Jeff Holland outside, but Holland is able to loop around to Allen and reach him in roughly 3.8 seconds. The ball probably needed to be out of Allen’s hands already, but he couldn’t find a receiver and was sacked — again.


The issues were a continuation of a season-long theme for Arkansas’ offense, with Allen serving as a proverbial piñata for opposing pass rushes. The only difference: Allen and the Arkansas receivers were unable to overcome the pressure and move the sticks continuously.

Allen went 17 for 30 for a season-low 187 yards and was sacked three times before finally being pulled prior to the Hogs’ last two series.

Including a Ty Storey sack late, Arkansas has given up 21 sacks in eight games after allowing 14 in 13 games each of the last two years.

Arkansas had produced more than 400 yards of offense in six straight games entering Saturday, but finished with a season-low 215 against a stout Auburn defense that physically whipped the Hogs.

The run game produced a season-low 25 yards on 31 attempts. Even subtracting sacks, the Hogs produced just 50 yards on 27 attempts, a measly 1.9 yards per attempt. The Razorbacks struggled in short-yardage situations, which killed drives several times. On this third-and-1, Raulerson pulls but stops in the hole with no one to block, causing Devwah Whaley to slow and dance, never a good combination outside of a country bar.


Arkansas backs were often met with hard, de-cleating tackles from an Auburn defense that flew around and made the Razorbacks look physically inferior.

Arkansas had exclusively used a nickel look for its first seven games, but went with its base 4-3 package at times Saturday, inserting junior linebacker Khalia Hackett for nickelback Henre’ Toliver against Auburn’s staunch run game.

Obviously the results weren’t great. As has been the case too often, the run fits were inconsistent. Hackett, who was listed as the starting strongside linebacker this week after a four-week absence from the depth chart, finished with three tackles, two solo.

Brooks Ellis had six tackles, two solo, from his middle linebacker position. His struggles outside the tackles and in space have been documented. Here, he is in good shape, but isn’t quick enough laterally to finish the play, allowing an 11-yard gain.


Dwayne Eugene tied for a team-high with eight tackles, for solo, while splitting time at weakside linebacker with true freshman De’Jon Harris, who didn’t record a tackle. Too often, Eugene was stuck inside, which played a role in Auburn getting the edge. In the above video of Liddell’s missed tackle, Eugene takes a few steps inside and then trips while trying to recover.

The group collectively was largely unimpressive. When it came down to it, Hackett was “the guy” at SAM after the position went unused for seven weeks. The weakside spot has been a question mark without injured Dre Greenlaw. Ellis struggles in space at times and doesn’t have the luxury of being spelled by a backup.

The entire group struggled to fill gaps and get off blocks Saturday, regularly being locked up by Auburn blocker, unable to make a play.