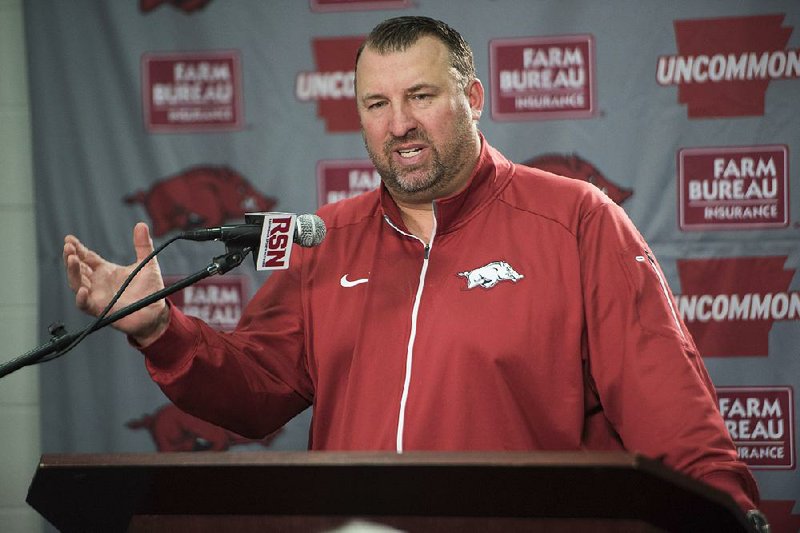 — The bye week is about figuring out where you're at and where you want to go.

— Having it in week eight, further from the midpoint, changes stuff.

— Was concerned there would be positive MRIs for Austin Allen and Brian Wallace, but both came back clean. Allen couldn't probably play if the game was Saturday, but will be back Sunday. Wallace is questionable for next week.

— They've moved players around at guard and tackle. At tackle, in case Wallace can't go. At guard, because they're re-evaluating their options. Defensively, they're trying guys in different positions, trying to find spots that fit. Could be a DT at DE or a WLB at SLB.

— De'Andre Coley didn't play because he stepped in a pothole Wednesday while talking to his mom on the phone as he walked across campus.

— Defensively, Auburn was able to run the ball without any obstruction on a lot of plays. Defense has to make sure the perimeter is set. Main points of discussion have been the techniques and then the personnel being asked to set the edge.

— A first-year coach made it to the team meeting room 10 minutes early Sunday and said it was the first place he'd ever been where every player came in, sat down and didn't say anything. Bielema said it was dead silent when he came in.

— Coaches can't talk to recruits on the road this week, but the reception from coaches has been very positive. They've had recruits committed to other places Arkansas plays and express interest because they know there's playing time available.

— Colton Jackson is focusing at RT because of Wallace's injury. Jalen Merrick and Zach Rogers are working at RG. Hjalte Froholdt has recovered quickly.

— Jake Raulerson's ankle is the size of a small balloon and he's been playing on it the last two weeks. They don't have any options they feel comfortable with right now. Wishes they'd recruited more interior offensive linemen. Denver Kirkland leaving early hurt.

— Deion Malone is redshirting because he just isn't ready yet. Paul Ramirez has tried to jump in but isn't at the level they feel comfortable playing him right now.

— Program is trending the right direction. In the last 15 games, they rank second in the SEC West in total wins. He's "not going to apologize for that."

— This is a big recruiting class because they have a lot of numbers thanks to junior early departures. If they're going to hit on JUCOs, they need to be players who love to play, not look pretty.

— Wants to sign at least four offensive linemen, five if it's the right people.

— Cole Kelley is getting a lot of reps along with Ty Storey, especially this week with Allen out.

— Austin Allen likes to hang onto the football, so the sack numbers are a bit skewed. "The outside world doesn't realize that." More quick game stuff could be an answer.

— On the run game: Just because you've played good football in the past doesn't mean it carries over to the future. Losing Dre Greenlaw and Kevin Richardson hurts. They've got to keep getting young guys ready.

— Deatrich Wise's ability to strike with his hand is probably affected by his injury.

— More than anything, knowing who's responsible for cutback, contain and reverse is key. Knowing assignments... If you're an edge setter, you have to set it. If you're a down safety supposed to funnel in, you have to do that.

— Offenses are putting up higher numbers than ever before, not just in the SEC but everywhere. Rules play into it. They aren't looking for anything differently in recruiting on defense. Depth is an issue.

— He'll go to three high school football games Saturday in West Texas and Arizona. He'll be all over the place. His record is five states in one day but three games in one day will be a record.

— Not going to pull any redshirts.

— Didn't play well in any phases offensively and you saw the results.

— Very concerned about Austin's health. They're a different team without him in there. He makes the offense go. He's tough and will do whatever he can to be ready to play next week.

— Offense got overwhelmed up front. When that happens, there's not a lot you can really do. Auburn's LBs and DL were much more physical and beat the offense to the punch. When they had chances to make big plays, they couldn't take advantage. There were WRs open downfield for potentially big plays, but pressure kept them from getting a pass off or making a good throw.

— When you play eight games against the teams they have, it takes a toll. Bielema backed off the physicality and length of practices a few weeks ago to help preserve players, but the bye comes at a good time.

— Players are probably more resilient than coaches are. They bounce back pretty quickly. Bielema sets the tone. He wanted to have passion, energy and a spirited practice yesterday and they did.

— Doesn't buy into defensive issues taking a toll on the offense. They had chances to make plays. Thought they put the defense on the field too much and too quickly.

— They didn't ask Storey to do much when he was in.

— Asked if Storey would be getting ready this week to come in for Austin if needed: "Him or Cole." Both are getting work.

— When things aren't working and you can't control the line of scrimmage, it's difficult to call plays.

— The offensive line took a step back Saturday. He'd thought they were gelling going into the game. Staff and players know it has to be better moving forward.

— Went through the game thoroughly, each play, with the unit.

— On moving players around: After a performance like that, you have to evaluate everything A to Z, which includes were players are lining up.

— The run defense isn't how they'd expected it to go.

— Not focused on the offense during the game. The defensive staff and players are adjusting and talking.

— Both young players and veterans are in play for increased or different roles in the bye week.

— You have to be focused on the process in times like this. No one wants that result and it can't be tolerated, but they believe in the process. They have to fine-tune where the process has worked well and eliminate where it hasn't.

— They have to continue to find ways to make the picture simpler and easier for young linebackers.

— On the first play, they didn't adjust to the motion and got out-leveraged.

— If anything, guys were trying to do too much, which opens up other issues. Didn't think it was an effort issue.

— A lot of inconsistency in how every player played. There wasn't anything good grade-wise or performance-wise that came out of Saturday.

— Florida has a different offense than what they've faced the last few weeks, so they have to re-set.

— Tried to get extra guys in the box. Tried to pressure at times. "We tried it all."