Arkansas to play game at Kauffman Stadium in Kansas City 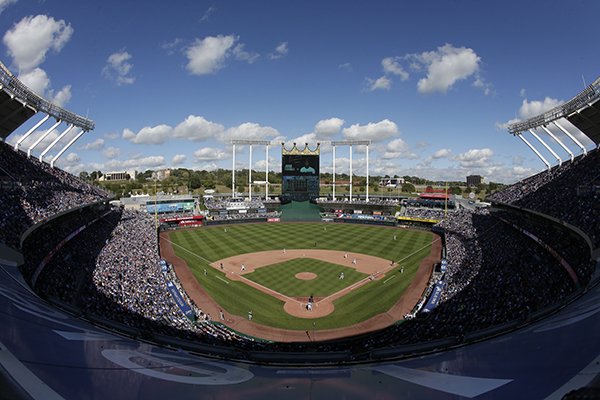 A general view of Kauffman Stadium during a baseball game between the Kansas City Royals and the Cleveland Indians Sunday, Sept. 27, 2015, in Kansas City, Mo. (AP Photo/Charlie Riedel)

FAYETTEVILLE — Arkansas has agreed to play a baseball game at Kauffman Stadium in Kansas City, Mo., next April.

The Razorbacks' opponent has not been determined, coach Dave Van Horn said, but it will likely be against a regional team. Kansas State is among teams that have expressed interest in playing a game at the Royals' home stadium.

Arkansas recruits the Kansas City area well. There are four players from Kansas City suburbs on the Razorbacks' fall roster and at least seven high school players from the area are committed to Arkansas.

"It'll be fun," said Van Horn, who grew up in Grandview, Mo., about 20 minutes from Kauffman Stadium. "I think the players will enjoy it. A lot of times you get into late April and you're playing midweek games on the road, so it's nice to go to a venue like that. I think it piques their interest and gets them excited to play."

The stadium was the site of a college game last season between Missouri and Saint Louis. Van Horn said more games are being scheduled there through an affiliation with the Dick Howser Trophy.

The game in Kansas City is one of at least seven the Razorbacks will play next season against nonconference teams away from Baum Stadium. Arkansas is also scheduled to play Nebraska, Arizona and Oklahoma State during the Frisco (Texas) College Baseball Classic in March and two midweek games at Louisiana Tech.

The Razorbacks are scheduled to host Memphis at Dickey-Stephens Ballpark in North Little Rock.

Arkansas is scheduled to open the season with a three-game series against Miami (Ohio) beginning Feb. 17 in Fayetteville. Other weekend nonconference opponents will include Bryant and Pacific, Van Horn said.