State of the Hogs: Hogs thwart upset bid 1 inch at a time 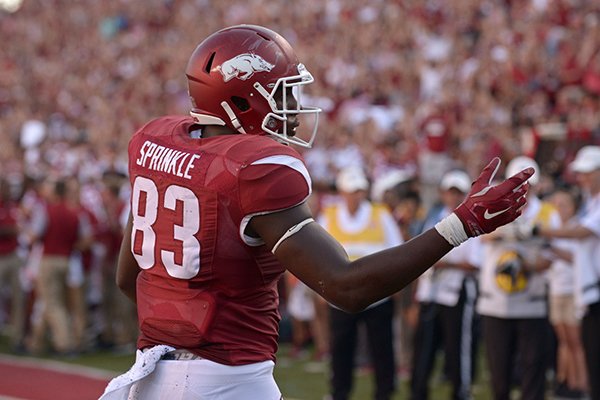 Arkansas tight end Jeremy Sprinkle celebrates after scoring a touchdown during the fourth quarter of a game against Louisiana Tech on Saturday, Sept. 3, 2016, in Fayetteville.

FAYETTEVILLE — Winning can be easy. Or it can be by an inch. For Arkansas in a 21-20 college football victory over Louisiana Tech on Saturday night, it was one inch at a time.

Favored by three touchdowns, Arkansas overcame an abysmal third quarter with a sterling finish to squeak past the Bulldogs on a series of winning plays, all by about 1 inch.

Take your pick from these four plays:

There was a 39-yard field goal clanging off the upright that would have given Tech a two score lead in the first minute of the fourth quarter.

Recruits who were at the game

Lou Holtz let go of his anger at Arkansas

There was Austin Allen's 4-yard throw back pass for the winning touchdown to Jeremy Sprinkle with 6:31 to play. Tech outside linebacker Jaylon Ferguson stayed with Sprinkle, breaking under the route. Allen's pass was lofted perfectly, just an inch over Ferguson's outstretched fingers

There was Keon Hatcher battling to break tackles and keeping his knee from touching on a 13-yard pass play. Even Hatcher wasn't sure his knee didn't touch until watching the replay on the big screen. He made it by an inch.

Finally, there was the fourth-and inches play from the UA 37-yard line with 1:27 to play. Kody Walker powered for 3 yards on a dive play from fullback, a position he had not practiced during fall camp.

“It was a game of inches,” Allen said. “We got just the right bounces. That's how close this one was, just a few inches here and there.

“I know the pass to Jeremy made it to him by about one inch. I know that's how close the field goal they missed had to be. Keon stayed up by an inch. We made an inch at the end.

“Give Louisiana Tech credit. That's a good team and we got it by an inch here or there. But it's huge to get a win. Huge. Resolve, determination is what we had. That's all you have to win by, 1 inch.”

If any of those plays had gone Tech's way, the huge underdogs would have pulled the upset. Maybe in the first three years of coach Bret Bielema's time at Arkansas, perhaps the Hogs couldn't have mounted the comeback.

“I don't think those other teams could have won a game like this,” Bielema said.

Well, they didn't, especially early in the season. There have been some fourth quarter nightmares. This time the Hogs were rock solid in the final quarter after getting whipped in the third quarter. They were out-gained 109 to minus-4 in total yards in that ugly third quarter.

Tech went to some new stunts and alignments after halftime to stuff the Hogs for losses on their first three plays. Allen was sacked for losses of 8 and 4 yards, then Rawleigh Williams lost 3 yards on a screen pass.

Meanwhile, the Bulldogs drove the ball on their first three possessions, but got only two field goals. They were stopped on the third drive when Randy Ramsey came up with a sack. From there, the Hogs gained steam, the crowd coming alive when that third field goal try banged off the left up right.

That's when Allen came alive for a 13-play, 77-yard touchdown drive. So, in his first career start, there already is that clutch performance to win a game that some pointed as a flaw in his brother Brandon's game.

Williams carried four straight times into the teeth of an eight-man Tech front, churning for two first downs. Drew Morgan broke a tackle on a wide receiver sweep to convert the first third down in the march.

There were two big plays to Hatcher at the end. Allen, sacked four times, broke a tackle when the pocket collapsed from his right. He stepped out of the grasps from the end, bought some time for Hatcher. The fifth-year senior wideout reversed his route and caught a dump, then broke a tackle on an 18-yard gainer.

The Hogs had to overcome a holding penalty on first and goal from just inside the 10-yard line. Hatcher erased most of it when he made 13 yards on a catch and run, sending the black pellets flying as he reached to the ground to keep his balance.

The fourth-and-goal pass from the 4-yard line was part of the Hogs' 2-point package. Allen rolled right to buy some time as Sprinkle worked from the right hash all the way into the left corner. It was a perfect pass.

“We call it 'Oh My Gosh,' or 'OMG,'” Bielema said of the play, grinning a little for giving up the name.

Allen confirmed that was the name of the play.

"Exactly," Allen said. "We work on it a lot. The linebacker went with Jeremy so I had to put it up a little higher. Like I said, it was good by about 1 inch.”

There is value for the way the Hogs had to win it. Maybe a blowout would have been better for fans, but confidence is important as a new quarterback takes the reigns. Linebacker Brooks Ellis liked what he saw in his best friend, his teammate for so many years through the Fayetteville schools.

“He was killing it in the fourth quarter,” Ellis said. “It's weird seeing him do it now, taking over for Brandon. He really showed his focus at the end. I loved it.

“Austin got hit a lot today. But it never bothered him. He never changed. He just kept playing. At the end, he escaped and kept moving forward. That was a big play.”

Allen wasn't pleased with much aside from the victory. He pointed to lots of mistakes, especially the two interceptions that led to both Tech touchdowns.

“You can't give up the short field,” he said. “I made two throws that really hurt my team. You can't throw into coverage.”

Bielema said one was into coverage, the other the result of a bad route by an experienced receiver.

There were some brilliant plays by the veteran wideouts, most notably Hatcher and Morgan. It's clear that Allen knows where to take the ball in crunch time.

“Yes, they came up huge,” Allen said. “I know to count on them. They make plays. They are really good players.”

The defense started slow, missing some alignment keys against Tech's spread in the first half. Gradually, those were squeezed out of the Tech game plan, but tackling was iffy.

Defensive coordinator Robb Smith liked the play in the last quarter, noting, “That was very good on our guys in the back end in the last 15 minutes. We got better.”

Ellis said, “We eliminated some of the alignment busts that were hurting us. And we can tackle better than that.”

Bielema said that's something that will be worked on this week before the Hogs travel to Fort Worth, Texas, to play TCU.

“We can tackle better than that,” he said. “We'll get that fixed. You worry about tackling in an opener. We could have gotten off the field on some third down plays if we had tackled better.”

Hatcher missed all but the first two games last year with a broken foot. He was excited to return to the field.

“It's been a while,” he said. “It's a win. No, we aren't happy with some of the things we did, but you make your most improvement between your first and second game. We'll get better.

“The thing I liked was the way Austin played. It was pretty good. They had some pressure on him and at the end he came through.

“God is good. Being back on the field with my teammates is great. I feel fortunate to be back playing.

“I had fun. I will say I wasn't sure if my knee touched on that play at the end. I watched that replay like everyone else. Did it touch? No, it didn't. I loved it. You just fight for every inch.”

Yes, that's what the Hogs did. The inches fell right. They added up to the slightest of margins, but in the end it counts one in the win column.

“A win is a win,” Hatcher said. “I've been on the other end of some of these.

“My quarterback made plays at the end. It was a lot of fun. We had that scramble drill. That showed me what Austin has in him. He's got that quality, not sure what you call it. But he's got it. We saw it right there. I think he likes to be out there.

“I think you get a win like this, in this situation, it builds some confidence maybe that we wouldn't have gotten out of a big win. It might help us.

“We've got to fix some things. But I like a lot of what I saw from some of the young guys who have never played.”

Austin Allen is 1-0 as a starter. An inch or two the other way, maybe that's not what anyone would be saying. The Hogs got there 1 inch at a time.