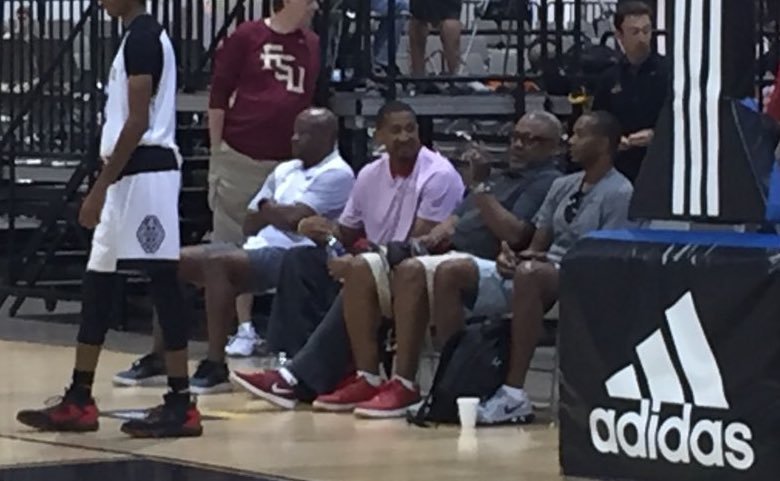 The starting five of the 16-under Arkansas Hawks will being playing together for several more years to come after Little Rock Parkview junior forward Ethan Henderson publicly committed to Arkansas on Monday.

Henderson, 6-9, 190 pounds, chose the Hogs over offers from LSU, Notre Dame, Indiana, Texas and Arizona State. The Hawks are the first spring and summer team to have all five starters pledge to the same school.

Hill, who was the first Hawk to commit to the Hogs in February, was thrilled with the addition of Henderson.

“It's a crazy feeling, knowing all four of my guys are coming to the Hill,” said Hill, whose father, Fitz, was the first to coin the phrase "The Hog 5." “It's exciting thinking about what's ahead of us in the future; I’m trying to make them expand Bud Walton. Ethan coming on board makes the No. 1 2018 recruiting class even better. I just thank God for the opportunity to do something we love with the guys we grew up with.”

The Hawks won The Real Deal in the Rock and 3 Stripes tournament in St. Louis while finishing in the semifinals or finals of other tournaments. They finished the season 33-5 and were ranked in the top 10 all season and reached as high as No. 4 in the nation.

Joe is considered a shooting guard but can play the point in a pinch. He has played basketball with Henderson since the first grade and looks forward to continuing being his teammate.

“Ethan is very athletic and a good teammate,” Joe said. “I love setting him up for his dunks. If you put the ball in his area, he will go get get it. If you are in the wrong spot defensively, Ethan will put you on a poster. We have been talking about playing basketball in college since we were young, never knowing that we would be on the same team. Ethan and Reggie both have the ability to take over a game from the post.”

Henderson not becoming a Razorback was unthinkable for Perry.

“Well Ethan is a big part of this project,” Perry said. “I guess you can call it that. It wouldn't be the same without him, and now we just all have to continue to get better individually and continue to grow as a team.”

Sills is hoping the five Hawks will put their own stamp on the Arkansas program.

“Adding him to the other three along with me is great because we've been playing with each other for some years now, and plus we already have chemistry,” Sills said. “Now we’re going to Fayetteville playing for the Hogs. We're going to make history and hopefully bring some national championships to the Hogs. We’re going to be a special group.”