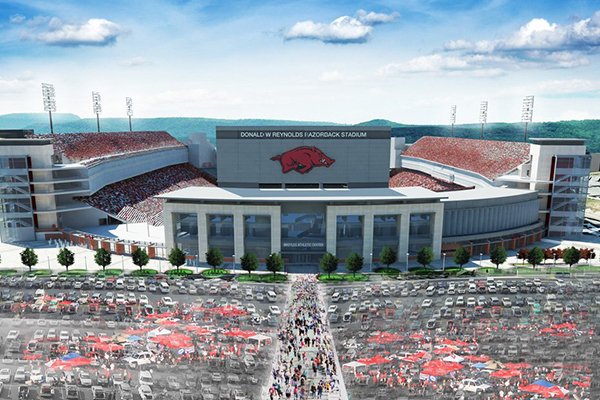 An artist's rendering shows what a proposed expansion to Donald W. Reynolds Razorback Stadium in Fayetteville might look like. The UA athletics department estimates the project would add about 4,800 seats and cost $160 million. (Photo by Razorback Athletics)

The University of Arkansas System trustees on Thursday voted to approve up to a $120 million bond issue to fund an expansion and upgrades at Donald W. Reynolds Razorback Stadium in Fayetteville.

The measure, which was approved in committee Wednesday, passed the full board Thursday morning with two trustees voting against: David Pryor of Little Rock and Cliff Gibson of Monticello.

The stadium project, which is expected to total $160 million, will enclose the north end zone while also adding new premium seating. The expansion is expected to add around 4,800 seats, which would bring the stadium's capacity to near 77,000.

Renovation is expected to be complete by the 2018 football season.

The Broyles Athletic Center, located at the north end of the stadium, will have to be rebuilt as part of the renovation. Many athletic department officials have offices in the building.

The project would also include renovations to the former Bogle Academic Center on the stadium's east side.

Arkansas' home football stadium last underwent a major renovation before the 2001 football season. That expansion added an upper deck to the east side, as well as club seating and suites to the south end, and expanded capacity to 72,000 people.

The 134 existing suites at the stadium are sold-out on an annual basis. During an interview last October with the Arkansas Democrat-Gazette, Arkansas athletics director Jeff Long said a 2013 survey indicated the demand for at least 60 additional suites.

Suites accounted for 16 percent of the Razorbacks' football season-ticket proceeds last season. The stadium has 9,076 club seats, of which 98 percent were filled last year through season-ticket sales.

Click here for images showing how the renovated stadium is expected to look.