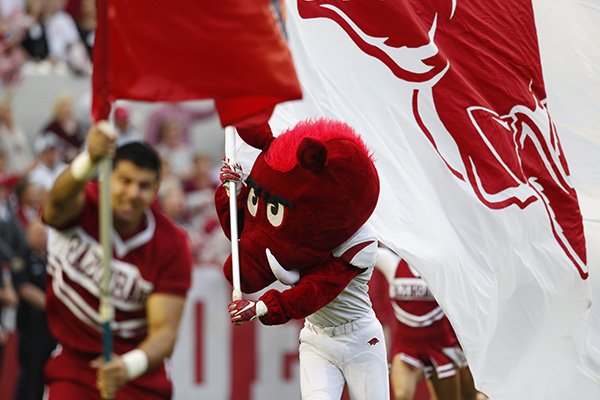 Arkansas mascot Big Red runs onto the field prior to a game at Razorback Stadium in Fayetteville.

FORT WORTH, Texas — Arkansas will open its football season with Football Championship Subdivision opponents at least twice in coming years, including next season.

Florida A&M is the fourth and final nonconference opponent scheduled for the 2017 season. The Razorbacks are also scheduled to host TCU, Coastal Carolina and New Mexico State next season.

The TCU game is scheduled for Sept. 9 next year in Fayetteville. The New Mexico State game on Sept. 30 and Coastal Carolina game on Nov. 4 may be played in either Fayetteville or Little Rock.

The Missouri State game is the second nonconference opponent the Razorbacks have agreed to play in 2021. Arkansas is scheduled to play Texas on Sept. 11 of that year.