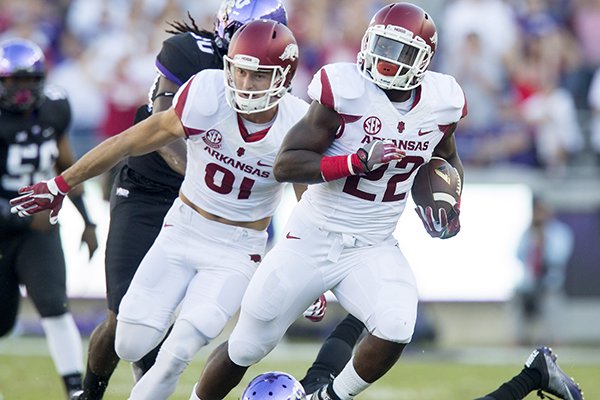 Arkansas sophomore running back Rawleigh Williams carries the ball on Saturday, Sept. 10, 2016, against TCU at Amon G. Carter Stadium in Fort Worth, Texas.

FORT WORTH, Texas — A trip to the film room to look at five observations from Arkansas’ 41-38 double-overtime win at No. 15 TCU on Saturday.

The junior quarterback had his coming-out party in front of a national audience, leading the Hogs back from what appeared like a devastating collapse and cementing his state-wide hero status with his game-winning touchdown run in the second overtime. Allen threw two touchdown passes, ran for another and caught a two-point conversion in the final 63 seconds of regulation and overtime.

He was brilliant with the game in the balance and finished 17 of 29 for 223 yards and three touchdowns in the air, plus the game-winner on the ground.

The 5-yard touchdown run was pure grit and determination as he shook off would-be tacklers and forced his way into the end zone with the aid of a few lineman. He spiked the ball with authority and was mobbed by the entire team behind the end zone while stunned home fans looked on and delirious Arkansas fans, of which there were plenty, hugged each other.

He first found Keon Hatcher for the 16-yard touchdown pass to pull the Hogs within two, then tied the game when the roles reversed for the two-point conversion thanks to a great fake and nice toss by Hatcher and an impressive catch by Allen in the corner of the end zone while running full speed.

In the first overtime, his touchdown pass to Jeremy Sprinkle was one of a few nice connections for the duo during the game.


The first pass is from the third quarter and got Arkansas out of a down-and-distance hole. Great extension by Sprinkle. The second put the Razorbacks ahead in the first overtime. Allen looked like he was throwing to Sprinkle the whole way, but placed the ball perfectly, putting it where only the athletic 6-foot-6 Sprinkle could reach it. Allen was dropping dimes like he was in a State Farm NBA commercial. The moment wasn’t too big for him in his first road start, against a nationally ranked foe and in ESPN’s primtime game. He owned it.

With less than two minutes left, it looked like Arkansas’ kicking game would again be a culprit in another gut-wrenching loss in the Metroplex. Cole Hedlund’s missed 22-yard field goal with 11:30 left was a momentum-shifter, preventing Arkansas from taking a 23-7 lead. TCU scored less than two minutes later and then took lead a little more than four minutes after the miss.

Allen led the Hogs down the field and tied it at 28 with a little more than a minute, but the revelry on the Razorback sideline didn’t last long.

Will be interesting to find out if Arkansas wanted to kick it short toward its sideline to TCU’s electric Kavontae Turpin or if it was just a mis-placed or mis-hit ball by Connor Limpert. Either way, Turpin, hands down the most impressive athlete on the field in the game, returned the kickoff 64 yards to the Arkansas 27. The Razorbacks’ kick coverage has been poor so far this season. Opposing teams are averaging 29.9 yards per return, which is No. 118 in the nation and No. 13 in the SEC (Missouri, 32.0).

But Dan Skipper responded with a big special teams play of his own, one Arkansas fans have grown accustomed to, just never in quite as big a moment.

The 6-foot-10 senior got a hand up and blocked the sixth field goal of his career with 10 seconds left to preserve the tie and send the game to overtime. Worth mentioning that Sprinkle actually got even higher and probably would’ve blocked it had Skipper not gotten to it. Wonder if Sprinkle could hang with Adrio Bailey in a dunk contest.

Arkansas’ special teams have been shaky through two weeks, with Hedlund’s late miss a disconcerting throwback to past struggles in key moments. But Skipper came through when Arkansas’ chances looked bleak, giving Allen and the offense an opportunity to win the game in overtime.

— Secondary gets aggressive, with mixed results

Arkansas’ secondary made an about-face schematically Saturday, playing within four or five yards of the line of scrimmage — including quite a bit of press — for much of the night, a change in philosophy from the season opener, when Arkansas frequently gave Louisiana Tech’s slot receivers anywhere from six to 11 yards of cushion, resulting in quick passes for easy positive yardage.

The results were mixed. The Hogs held TCU to a lone touchdown for more than three quarters, but Kenny Hill connected with Turpin for 57-and 43-yard gains in the fourth quarter to set up touchdowns.

Turpin uses the hitch-and-go to free himself here. At that point more than any, the game felt like it was slipping away for Arkansas.

Hill finished 36 of 56 for 377 yards thanks to his big finish and Arkansas’ secondary showed it was still susceptible to the big play in the fourth quarter, but the pass defense took some encouraging steps forward, in performance and scheme.

Henre’ Toliver, moving from boundary corner inside to the nickel back spot in place of injured Kevin Richardson, was a sure tackler.

Ryan Pulley, making his second career start at boundary, had a pair of impressive pass breakups in the opening quarter.

With Arkansas in a Cover 3, the Hogs might’ve been in trouble if Hill had led his receiver, but Pulley made a nice recovery nonetheless, breaking on the ball and arriving with physicality.

This may be the single best play in pass coverage by a Razorback defender so far this year. In press coverage, Pulley stays in the receiver’s hip pocket before accelerating to beat his man to the spot and extending to knock away the pass. Impressive stuff.

And of course, Brooks Ellis had a pick-six…

The Fayetteville Purple Dog defensive duo was in the right place at the right time on a regular basis for Arkansas on Saturday, helping the Razorbacks win the turnover battle 2-0.

In the first quarter, sophomore linebacker Dre Greenlaw pounced on a Deante Gray fumble forced by Jeremiah Ledbetter inside the Arkansas 10-yard line, ending a Horned Frogs scoring threat on their opening drive.

Senior linebacker Brooks Ellis was the star for the defense the rest of the night and made the Hogs' defensive play of the game in the first half.

In the second quarter, Ellis jumped a Kenny Hill pass in the flat, intercepting it and returned it 47 yards for a touchdown to extend Arkansas’ lead to 13-0, giving the Hogs all the momentum early and breathing life into the defense, which was strong for the rest of the half and up until the fourth quarter.

Ellis is often targeted by opposing offenses who try to match him up against quicker receivers in the slot, which can leave him susceptible to getting beat in coverage.

It happened a few times Saturday, but Ellis was, for the most part, very effective. He finished with 13 tackles, three tackles-for-loss and of course the interception.

He was quick and decisive getting to the football the football, which resulted in several big hits immediately after short catches and in one instance set up a sack by Ledbetter and Randy Ramsey after Ellis got the initial pressure.

He did all that while battling cramps and getting several IVs throughout the game, even having to leave the field on the goal line right before a TCU score.

Rawleigh Williams answered any questions of his health last week by running for 96 yards on 24 carries in the opener. The sophomore running back followed up the impressive opening-week performance with the best performance of his young career.

Williams finished with a career-high 137 yards on a career-best 28 carries, working in tandem with a physical offensive line to wear down TCU. The Razorbacks struggled at times in pass protection (more on that in a second), but the line was superb both run and pass blocking late.

Great play call and stellar block by Skipper to spring Williams for the 37-yard gain. But his 22-yarder in the fourth quarter is up there as one of his most impressive in a Razorback uniform.

It put the Hogs in scoring position, but Hedlund missed the field goal.

It’s worth noting freshman Devwah Whaley only got two carries. Kody Walker had 19 yards on seven carries. Williams has been a workhorse through two weeks, totaling 233 yards on 52 carries operating as a feature back. Expect a heavy dose of Whaley and the debut of T.J. Hammonds against Texas State.

For as good as Arkansas’ run game was, the Razorbacks’ pass protection was again shaky at times.

Arkansas had protection issues against TCU’s dynamic defensive ends — James McFarland and Josh Carraway — on the other three obvious passing situations, similar to the struggles the Hogs had last week.

Redshirt freshman right tackle Colton Jackson had a tough night, starting in the first quarter when McFarland beats him with a quick move above. The pressure forced an errant pass and resulted in Allen being knocked down.

Skipper gets beat off the edge by Carraway on a third down here, resulting in TCU’s only sack of the night. The Horned Frogs’ defense isn’t great by any means, but their defensive ends are no joke when pinning their ears back in passing situations.

Jackson gets beat again here in the first half. He just looks slow laterally when tasked with blocking quick ends, which is a definite issue in the SEC.

In addition to his struggles in pass protection, Jackson had two crucial false starts and whiffed on a key run block.

Arkansas had it first-and-goal at the 2 after Williams’ big run, but the whiffed block results in Williams being tackled behind the sticks for a 4-yard loss. It threw the Hogs off track and they were forced to settle for Hedlund miss.

As TCU rallied and took the lead, the line struggled to hold up in passing situations. Freshman fullback Hayden Johnson missed an assignment that led to Allen getting smoked on Arkansas' second-to-last drive in regulation.

But it worked out. Allen did only get sacked once this week after going down four times in the opener. The line puts its pass blocking struggles behind it when it mattered and was solid on the final drive of regulation and in overtime. Allen responded by being great, coming up cool and calm in the clutch as the Hogs vaulted themselves into the top 25 with a memorable win.