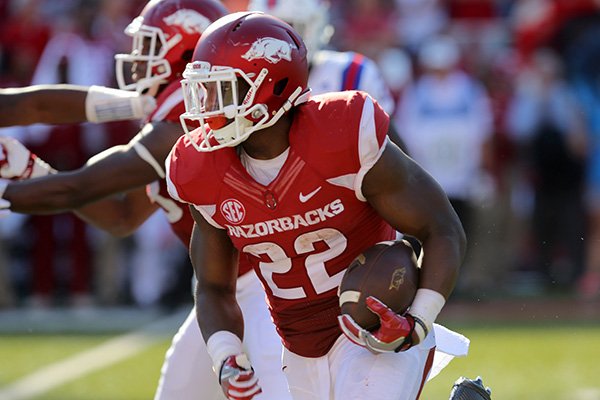 Arkansas running back Rawleigh Williams carries the ball during a game against Louisiana Tech on Saturday, Sept. 3, 2016, at Razorback Stadium in Fayetteville.

FAYETTEVILLE — Arkansas has released its football schedule for the 2017 season.

The 12-game schedule includes six games in Fayetteville, one game in Little Rock, one game in Arlington, Texas, and four games on the road. Here is the full schedule:

— The Razorbacks will play 10 straight games to close the regular season. Arkansas' four SEC road games come during a six-weekend span between Oct. 7 and Nov. 11.

— There is only one open weekend for the second consecutive year. The number of open weekends is determined each year based on the date of Labor Day.

— Arkansas will be the designated home team for the Texas A&M game in Arlington, Texas. That means the Razorbacks will only play three conference games at home next season.

— South Carolina is on the schedule for the first time since the Gamecocks beat Arkansas 52-7 in 2013. South Carolina and Arkansas played in each of their first 22 seasons in the SEC, with the Razorbacks holding a 13-9 advantage. The teams aren't scheduled to play again until 2022 in Arkansas.

— The decision whether to play Missouri again on the day after Thanksgiving likely won't be made official until next May. CBS has rescheduled the game between the Razorbacks and Tigers for that Friday the past three seasons. There is no indication either team is unhappy with the agreement, which means it will likely continue.

— Arkansas will open in Little Rock for the first time since the 2009 season.

— By playing Florida A&M at War Memorial Stadium in Little Rock, Arkansas is contractually obligated to play an SEC team there in 2018. That team is expected to be Vanderbilt, which rotates onto the schedule for the first time since 2011. Arkansas signed a five-year contract extension with War Memorial Stadium prior to the 2014 season that called for the Razorbacks to play two conference and three nonconference games there through 2018. Arkansas played Georgia in 2014 and Toledo in 2015, and is scheduled to play Alcorn State there in October.

— TCU will make its first trip to Fayetteville since 1988. The Horned Frogs' last Southwest Conference game at Arkansas was played in Little Rock in 1990. TCU will be the fifth former SWC team to visit Fayetteville since the Razorbacks left for the SEC in 1992.

— The Razorbacks will play two teams - Florida A&M and Coastal Carolina - that are currently in the NCAA's Football Championship Subdivision. Coastal Carolina will be playing its first season as a Football Bowl Subdivision member in 2017. The Chanticleers will be part of the Sun Belt Conference.

Discuss this story and interact with our staff of reporters at the football insider board.