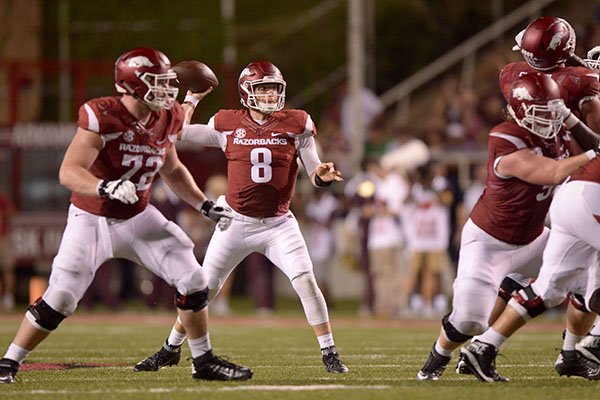 Arkansas quarterback Austin Allen throws a pass during a game against Texas State on Saturday, Sept. 17, 2016, in Fayetteville.

— Shakeup on the offensive line

Hands down the biggest storyline in a snoozer. Facing a bottom-tier Sun Belt opponent, the staff shook up the offensive line, switching juniors Frank Ragnow and Jake Raulerson. Ragnow moved to right guard, while Raulerson started at center. Bret Bielema hinted at changes earlier in the week, but the Raulerson-Ragnow flip probably wasn’t at the top of many people’s list of potential changes.

Right tackle was at the top of most lists. Redshirt freshman Colton Jackson started, but sophomore Brian Wallace was in on the second drive and the pair alternated series the entire game.

The starting line didn’t allow a sack for the first time this year. Austin Allen did go down in the second quarter, losing a fumble on a sack allowed by backup center Zach Rogers, who failed to pick up a blitzing linebacker.

Rogers was one of three linemen — along with Wallace and redshirt freshman Jalen Merrick — Bielema said might play a bigger role this week Monday. Merrick didn’t play. After the game, Bielema indicated the rotation at center and right tackle will likely continue at least into next week.

Hjalte Froholdt played the entire game at left guard, while Dan Skipper manned left tackle for all but the final two Storey-led possessions, when he was relieved by Jake Hall. Here's a look at how the offense performed with each of the right tackles and centers individually and as part of the different personnel groupings. 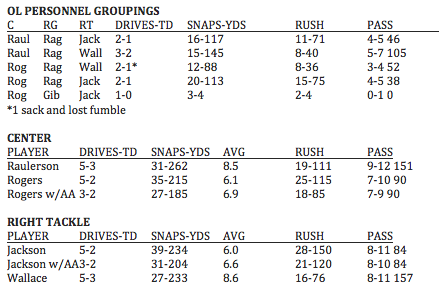 Jackson had his share of issues the first few weeks, most notably in pass protection. With a date with Myles Garrett and Texas A&M looming next week, Arkansas had to reevaluate its options at right tackle.

Saturday will probably be the best Jackson has graded out this year. He was decent in the run game and had a number of solid pass-block sequences, but was also still susceptible to quicker pass rushers, even against an overmatched Texas State defensive front. He is tough to beat when he gets his hands on defenders in tight quarters, but can look slow and plodding in space both in run and pass blocking. He got beat badly in pass pro early in the second quarter and Wallace was reinserted the next drive.

The above hurry he allowed wasn’t a sack only because Allen managed to escape the pressure.

Wallace appeared to perform well in his playing time, particularly in pass protection, locking up speed rushers off the edge on a number of occasions.

Impressive job by Wallace, helping the Hogs take a shot deep to Dominique Reed, something they didn’t do in the first two weeks, in part likely because Allen wasn’t afforded the time to let deep routes develop. He was nearly beaten on Allen’s 73-yard pass to Hatcher, but held him off long enough, fanning him outside to allow the deep post to develop.

Ragnow slid over to help him on at least one obvious passing down, a scenario that could repeat itself on a regular basis against Garrett and A&M.

Moving forward, Wallace seemingly played well enough Saturday to figure he may play an even bigger role against A&M.

McTelvin Agim’s impressive sack at TCU last week drew a lot of attention. Understandably so. Sosa is a true freshman, the highest-rated recruit in school history and already making an impact. But the veteran three technique he plays behind — senior Jeremiah Ledbetter — is no slouch either. Ledbetter spearheaded an impressive defensive effort against a thoroughly overmatched Texas State offense. The Bobcats only managed one first down in the first half and didn’t crack the 100-yard mark until the final play of the game, finishing with just 105.

Ledbetter finished with four tackles, three solo, with two pass breakups, 1.5 tackles for loss and 1.5 sacks. He was active throughout, with Texas State repeatedly unable to block him. Check out these.

Ledbetter was a force to be reckoned with. He impacted a number of other plays, too, even though they didn’t register in the stat book. The Razorbacks finished with four sacks and a hurry in 52 snaps, which was to be expected after Ohio sacked Tyler Jones six times in 98 snaps in Texas State’s opener.

Through three games, Ledbetter has 17 tackles, 2.5 tackles for loss, 2.5 sacks and two pass breakups. Darius Philon had nine tackles, four tackles for loss, 1.5 sacks and one breakup. Arkansas defense struggled without a Philon-like presence at the three technique last year. It appears the Razorbacks may have one this fall in Ledbetter.

Saturday was the third annual BATMAN DAY. Sophomore cornerback Ryan Pulley, an avid fan of the caped crusader, did his favorite superhero justice with his performance.

Pulley’s second career interception was a pick-six early in the second quarter.

He pounced on miscommunication between Jones and his receiver, returning it 25 yards to paydirt. The play was the result of the QB-WR mixup, but the pick six doesn’t happen without Pulley’s awareness and ball skills.

It’s the second straight week Pulley has impressed in an increased role, starting at boundary corner. Last week, he held TCU’s Taj Williams without a catch while on an island against the big-play receiver most of the game. Physical and aggressive, Pulley has excelled in press coverage and emerged as a playmaker on the outside for a team short on corners. The Hogs had no choice but to play him thanks to injuries and attrition, but he has excelled and more than earned every rep he’s gotten the last two weeks.

Prior to the season, Hatcher said he thought Brandon Allen put a little more zip on his passes than younger brother Austin. Reed — and Bielema — felt Austin threw a better deep ball even without putting the same amount of mustard on his throws.

Saturday, Allen proved their point by showing off pinpoint touch on arguably his most impressive throw early this season.

He hits Hatcher in stride on a deep post, a perfect ball lofted down the field resulting in a 73-yard gainer to the 1-yard line, setting up a Kody Walker touchdown run on the next play.

He did miss Reed deep downfield, overthrowing the speedster on a would-be touchdown. It was a rare miscue on a night when Allen finished 16 of 21 for 241 yards and two touchdowns, along with 21 yards on three non-sack carries.

He got to take the fourth quarter off this week after another encouraging early season performance. His confidence seems to be growing and he made a number of nifty plays with his feet to buy time. His touch and ability to drop passes into tight spaces has been impressive through three weeks.

Drake would be proud of Rawleigh Williams. The sophomore running back cracked the century mark for the second straight week, finishing with 121 yards on 19 carries. He appeared to be on the verge of breaking a big run several times, recording six carries of 10 or more yards.


His vision seems to be getting better week by week, evidenced in both of those clips. He’s generating extra yardage, combining his hard-nosed style with increasingly smart cuts since the opener when he missed a few lanes.

Through three weeks, he’s recorded 354 yards and three touchdowns while averaging 4.99 yards per carry. Average that production out over a 13-game season and Williams is putting up 1,534 yards as a feature back. Not bad.

The best part of Williams’ performance was that he and the rest of the Razorbacks were dominant enough for him to take the fourth quarter off, narrowly avoiding his third straight 20-carry effort to start the year.

As a result, true freshman Devwah Whaley got an extended look after toting the ball only four times the first two weeks, running for 50 yards on 11 carries.

He could have potentially broken a long run on his second carry of the night, but got his feet tangled up and tripped after just a 2-yard gain. His speed and strength were evident Saturday. It also seemed clear he was perhaps overly anxious to break the big run, hitting the hole full speed at times instead of setting up his blocks.

But that’s to be expected this early in his career, in his first substantial opportunity to play. The physical tools are there. The Hogs have to be thinking he can potentially spell Williams on a more regular basis moving forward as he gets his feet wet. Saturday was a solid start.