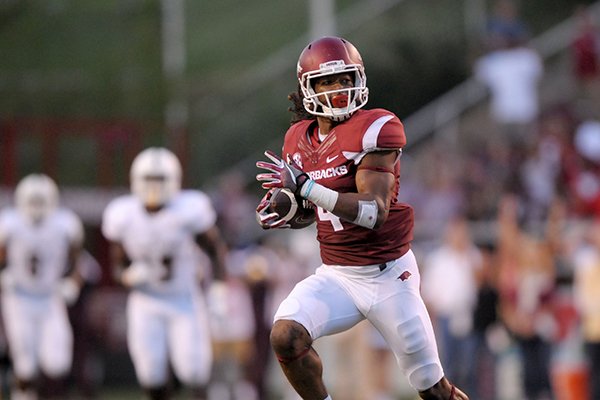 Arkansas receiver Keon Hatcher runs after catching a pass in the first quarter of the Razorbacks' game against Texas State on Saturday, Sept. 17, 2016, in Fayetteville.

FAYETTEVILLE — After starting the season with a pair of nail-biters, Arkansas had plenty of breathing room Saturday at Razorback Stadium.

The No. 24 Razorbacks beat Texas State 42-3 in their final tuneup before Southeastern Conference play. The game was shortened by five minutes because of inclement weather moving into the area.

The Razorbacks (3-0) scored on their first two offensive possessions and returned an interception for a touchdown en route to a 35-0 halftime lead. A second defensive touchdown was overturned upon a replay review.

Arkansas' defense held Texas State to 105 yards of total offense, including 26 yards on 24 plays in the first half. The Bobcats (1-1) finished with only 22 rushing yards on 26 attempts.

"I knew our guys were going to hear about how good they played last week, and I really put the screws to them about turning the page," Arkansas coach Bret Bielema said. "I think they did a pretty good job of that, because in this league if you worry too much about what happened yesterday, tomorrow will hit you in the face."

The duo connected again on a 73-yard pass on the next drive. The reception was originally ruled a touchdown, but overturned upon review. Kody Walker scored on a 1-yard run on the next play.

Hatcher caught three passes for 96 yards - all on the Razorbacks' first two drives.

Arkansas took a 21-0 lead on Ryan Pulley's 25-yard interception return for a touchdown early in the second quarter. Pulley caught a pass by Jones that went behind his receiver, and ran untouched to the end zone.

The Razorbacks added two more scores in the half on a 10-yard pass from Allen to Jeremy Sprinkle and a 1-yard touchdown run by Rawleigh Williams.

Allen finished the game 16 of 21 for 241 yards. Williams rushed for 121 yards and 2 touchdowns on 19 attempts. Neither played in the fourth quarter.

"They were big and physical, just like we thought they would be," Texas State coach Everett Withers said. "... They're deserving of a Top 25 spot, I believe."

The Bobcats' only scoring drive of the game culminated in a 39-yard field goal by James Sherman early in the third quarter.

Arkansas is scheduled to play No. 17 Texas A&M next Saturday at 8 p.m. at AT&T Stadium in Arlington, Texas.