State of the Hogs: Batman, the Freak and Flight School deliver 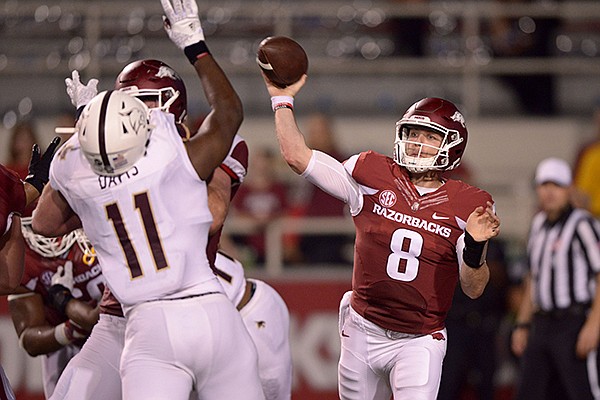 Arkansas quarterback Austin Allen throws a pass during a game against Texas State on Saturday, Sept. 17, 2016, in Fayetteville.

FAYETTEVILLE — Ryan Pulley's face dropped. His eyes looked away. Really, it was National Batman Day, and the Batman of the Arkansas secondary didn't know?

It was about the only thing that went wrong for Pulley or the No. 24 Razorbacks in a 42-3 pasting of Texas State on Saturday night at Reynolds Razorback Stadium.

Pulley said he was disappointed that he didn't know of the holiday celebrated nationally by Batman fans for the third straight year. In hindsight, he was upset that for the first time this season – game or practice – there were no items of clothing representing his hero. The sophomore cornerback from Fort Myers, Fla., sported a Batman shirt when he entered the interview room during training camp.

“I wore a half shirt last week at TCU, a Batman tank, under my jersey,” Pulley said. “Not tonight. I'll have something on next week. National Batman Day? I didn't know.”

Pulley would love to be nicknamed Batman. Maybe his pick-six for the third Arkansas touchdown will start a movement. It was the stuff of legends, although it was just against a Sun Belt Conference team in a game that was shortened to only 10 minutes in the fourth quarter. Bad weather loomed when the decision was reached at halftime.

Pulley jumped a route in the flats in front of the Arkansas bench, then intercepted Texas State quarterback Tyler Jones. It was an easy trot for the 25-yard return to the end zone. It was his second straight spectacular performance. He took TCU wideout Taj Williams out of the game in one-on-one coverage the previous week in Fort Worth, Texas.

“I just knew I had to step up my game,” Pulley said. “I've been focused like never before since camp. We had some serious injuries to my secondary. I knew what I had to do.

“The interception tonight, I give credit to my defensive line. They had the pressure. I saw it coming.”

McTelvin “Sosa” Agim got the inside rush to pressure Jones. It was probably the easiest interception Pulley's life.

“That's what I live for,” Pulley said. “I pride myself in getting my hands on passes. I hope there are more in the future. I want to step up for my secondary, my defense and my team.”

It was a team night. There were others with potential nicknames on the line. Frank Ragnow, moved from center to right guard, wanted to hand out one for quarterback Austin Allen. Allen wanted to recognize Ragnow's chosen nickname.

“I call (Allen) the Freak,” Ragnow said. “You get to the fourth quarter, he becomes just a freak. He did it the last two weeks. We are not supposed to talk about last week (at TCU), but he was a freak. I saw him transform into a freak. He's cold - just ice cold, like a freak.”

Allen just laughed after the easy victory over TCU. He wasn't needed in the fourth quarter, mainly because his version of freaky was mowing down the Bobcats at guard.

“Frank is the most freaky athlete on our team,” Allen said. “He can play any position in our offensive line. You saw him tonight. I will tell you that he doesn't like freak for himself. He calls himself Flight School.”

What's the scoop on Flight School?

“You know he thinks he's so athletic and can dunk,” Allen said. “He calls himself Flight School for the way he hangs in the air. He is pretty athletic, but I have never seen him dunk. There are rumors there are some clips on the Internet. But I haven't seen it.”

It was that kind of game. Nicknames and jokes were tossed around after the way the Hogs dismantled the Bobcats. It was 14-0 after one quarter, 35-0 at halftime and the last points of the night came on an 8:54 drive to finish off the third quarter.

That was probably the signal Texas State coach Everett Withers needed to throw in the towel. Referee Brad Rogers had visited with Withers after the first half ended. Perhaps that's when the agreement for a shortened second half was reached.

There really wasn't much to discuss about the game afterward. It was more about the restructured offensive line. Ragnow said he got wind of it when head coach Bret Bielema called him to his office.

“Coach B called me Sunday night,” Ragnow said. “He said we'd figure it out Monday, Tuesday and Wednesday. But I knew something is up.

“I'm not going to lie, there was some rust involved in moving (to right guard), but it was alright. I want to do whatever is best for the team.

“I did have to hold back to keep from making the center calls. But I never did. And, I never tried to line up over the ball.”

Jake Raulerson and Zach Rogers split time at center. Colton Jackson and Brian Wallace rotated at right tackle. There was one other twist to the offensive line: Jake Hall worked at left tackle in some unbalanced sets, just as he did in earlier games this week.

“Jake Hall, he's a freak, too,” Ragnow said. “His motor, it's intense. We are glad to get him with the O-line and he's going to be something special when he gets a few more pounds. He's so athletic and he loves to be with us.”

Bielema said there were some issues with the center conversion. There were three procedure penalties, mostly because of the change at the line with the snap count.

“Austin changed the count and they are just not used to him yet,” Bielema said. “We've got to get that ironed out.”

Bielema said Allen did some brilliant things at the line against the Bobcats.

“They do some things to the field side that required some checks,” Bielema said. “Austin was really good at the line with those.”

There were some checks to run plays that opened holes for Rawleigh Williams. The sophomore running back rolled for 121 yards on 19 carries. He was done after three quarters and two touchdowns.

“We've got some things to clean up,” Allen said. “I lost the ball on a sack. I have to have it secured with two hands when the pressure gets there. I didn't get on the ball, either. That's got to change. I heard about that.”

Actually, it was just the way things should roll as SEC play hits. The Hogs play Texas A&M at Arlington, Texas, next week.

“We are so ready,” Williams said. “I think we all are ready.”

Allen said, “It's a different approach this week, more of a professional approach. We all know we have to get more (tape) study, do the extra things for an SEC game.”

Ragnow said there is unfinished business waiting for the Hogs in Arlington. The Aggies have overcome double-digit deficits in the fourth quarter the past two seasons and won in overtime both times.

“The last two years, we didn't finish the deal,” he said. “We wanted to start faster this year. So far we've done that, taking a great 1-0 mentality each week. We know what we have to do this week, we have to finish the game. That's the approach we are taking.”

The Hogs will need more from Batman, the Freak and Flight School.