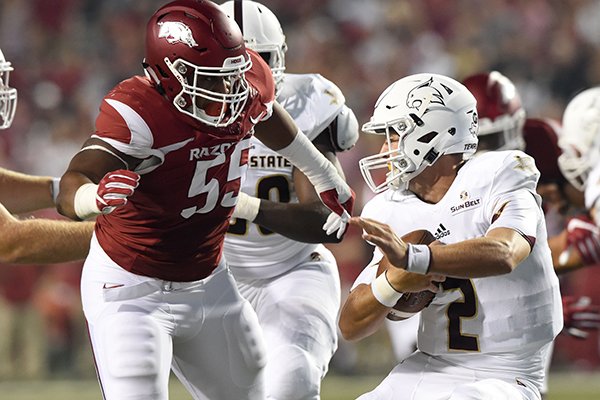 FAYETTEVILLE -- Texas State Coach Everett Withers said earlier week that this team's goal against Arkansas was to have more than 80 snaps on offense.

The Bobcats didn't get close to that, and the Razorbacks coasted to a 42-3 victory Saturday night.

Arkansas' defense had a lot more to do with Texas State's limited offensive opportunities than the fourth quarter being played with a 10-minute clock instead of the standard 15 minutes because of a threat of severe weather.

The Razorbacks held Texas State to 105 yards in total offense on 52 plays -- a 2.0-yard average per snap.

"They were unreal," Arkansas quarterback Austin Allen said of the Razorbacks defense. "The way they got the three-and-outs and got us back on the field with great field position was huge.

"They played with confidence and a little swagger out there, too."

Excluding the Bobcats' one-play possession when they got the ball after a kickoff with 44 seconds left in the second quarter, 6 of their 11 series ended with a punt after three plays.

Texas State's fourth possession, after three punts, also ended in three plays, but with Arkansas sophomore cornerback Ryan Pulley intercepting quarterback Tyler Jones' pass and returning it 25 yards for a touchdown to put the Razorbacks ahead 21-0.

"I was in press coverage, and thanks to my D-linemen, we got real good pressure on the quarterback," Pulley said. "He just threw it my way, and I jumped it.

"It felt really good. My first pick six. I'm going to going to try to get a lot more of those."

Pulley made his second consecutive start after junior Kevin Richardson was lost to a season-ending pectoral injury.

"Ryan is an extremely talented player," Arkansas Coach Bret Bielema said. "The receiver was actually blocking him. He just read the quarterback's eyes, made a tremendous pick.

"He probably leads our team in interceptions in practice. He just has a way of finding the football and obviously executed well on that play."

Arkansas is thin at cornerback with the loss of Richardson, a season-ending knee injury suffered by Britto Tutt in fall camp and DJ Dean being slowed by a hamstring injury.

"I had the step up the way our secondary was falling apart with injuries," Pulley said. "It clicked in my head that I've got to do something to help this team."

Texas State was the third consecutive hurry-up offense the Razorbacks have faced to start the season along with Louisiana Tech and TCU.

The Horned Frogs gained 572 yards in Arkansas' 41-38 double overtime victory on 90 plays, and at times snapped the ball before the Razorbacks were set on defense.

"I thought our guys grew up from last week in certain regards of just getting lined up, getting ourselves in the right position," Bielema said. "There were maybe 8 to 10 plays last week when we weren't quite ready to play when the ball was being snapped.

"We made a huge emphasis on that."

Arkansas' defense never seemed to be out of position against Texas State (1-1), which gained 560 yards in total offense in its 56-54 triple overtime victory at Ohio to open the season.

"These guys play really, really fast," Bielema said. "To get that opportunity out there tonight, this was like a very nice, long practice for us."

Jones, who passed for 418 yards against Ohio and caught a 22-yard touchdown pass, completed 11 of 26 passes for 83 yards Saturday night.

"The game plan was to stop their quarterback," Pulley said. "We did that pretty well."

Ledbetter had 4 tackles and 2 pass breakups.

"Just a very athletic, very dynamic player that creates a lot of mismatch issues," Bielema said of Ledbetter. "I also think he's playing like a man that's a senior that knows what he wants.

"He's a great kid. Mom and dad raised him up the right way. I think he's a very quiet player. He doesn't say a lot and his performance speaks for itself."